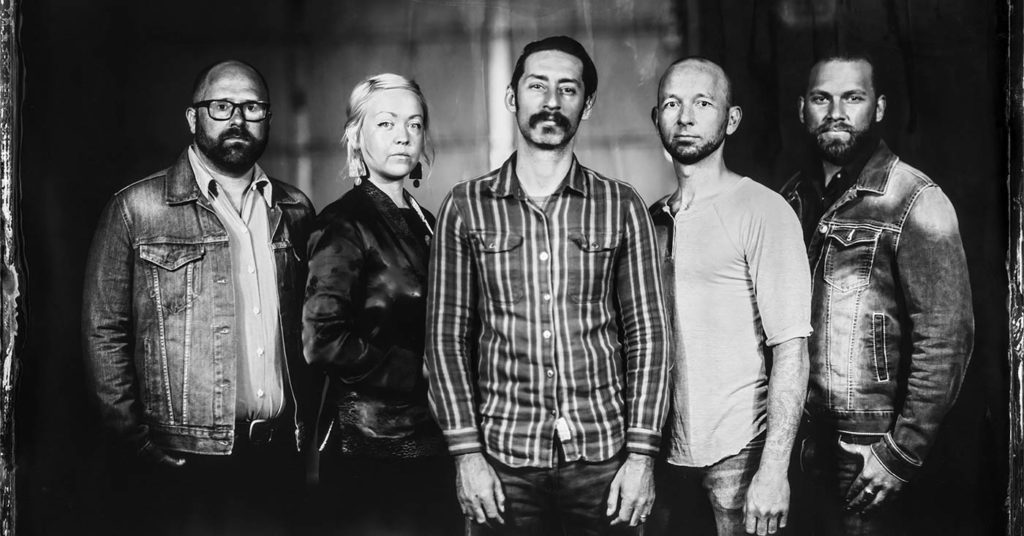 For the last two years, Adam Turla and Sarah Balliet have pulled double duty, as the core members of the band Murder By Death, as well as the owners and managers of Pizza Lupo, the Italian restaurant they started. After two years of long days, they felt the time was right to break free and record their eighth album, The Other Shore, a “space Western” that incorporates elements of ambient and prog.

“We knew it’s not sustainable, managing and doing all that, and maintaining the band,” Turla said. “It’s been really, really hard work with no breaks whatsoever. We basically told our staff when it came time to run our record, that you’re on your own. We still go in, we still review the books, but the day-to-day operations are no longer our main commitment.”

Recorded at La La Land with Kevin Ratterman and Anne Gauthier, The Other Shore is a lush and charming record that plays to the band’s strengths, while moving in an unexpected, yet welcome direction. Turla’s world-weary voice is a comfort, a friend on the porch guiding you through the night. Midway through the album, it takes off, soaring into the great unknown, evoking a Springsteen-meets-Flaming-Lips vibe, a dreamy landscape that seems lifted from the “Firefly” soundtrack.

“I feel really fatigued by Americana,” Turla said. “That’s always been part of this band. The Americana thing is just so present. I just feel like there is this song that has been playing for like five years, and I just didn’t want to go that direction.”

Record opener “Alas” is an expected, well-crafted addition to their oeuvre. There is a verve here, a particular spirit that transcends the blithe acceptance of Turla’s narrative, replacing the remorseful nature of the track with an unmitigated optimism. As such, “Alas” serves as a launching pad for the record, which rockets into hope and joy by the climax of the piece. The band is at its best when it engenders that sense of togetherness, a feeling that continues throughout the album, including on the interstellar folk of “Bloom,” which builds on that sense of adventure and longing, packing that feeling into a chorus that appreciates living in the moment. The band cools its jets with “Last Night on Earth,” a return to ground that mourns the one ending, while signaling a whole new beginning.

“We’ve been kind of calling it a space Western,” Turla said. “It’s a narrative album. The songs have their own functions and you can enjoy it, but if you want to dig, there is a story there.”

Forming around the turn of the century in Bloomington, Indiana, Murder By Death released their first record, Like the Exorcist, but More Breakdancing, in 2002. The album established their unique, haunting and shifty sound, with Balliet’s cello as the backbone, and Turla’s guitar as a driving force. Through the years, they’ve gained steam as one of the most interesting and versatile indie bands out there, with Turla’s searching baritone and heavy lyrics sounding like a channel for Cormac McCarthy characters, while the band’s experimental leanings never stay comfortable in one place. Taking chances and not playing it safe has always been part of Murder By Death’s path.

When Turla and Balliet moved to Louisville four years ago, they started investing their time in projects besides music — restoring an old house and eventually opening Lupo. But, the band was never going to fall by the wayside. After almost two decades, it’s basically part of their DNA.

“The funny thing about a band is that it’s a microcosm of your life,” Turla said. “It’s this thing that you invest all this time and energy. You invest your future in it.” •

Pick up The Other Shore at your local record store or through Bloodshot Records’ online store.