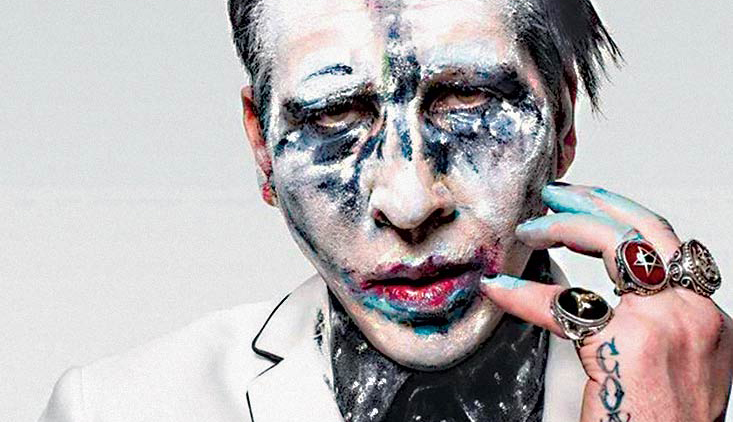 Before Marilyn Manson performs at the Louisville Palace this weekend, we combed through his discography, looking for songs that reflect his career arc. Pills, anger, guns, God and everything else people hold sacred is all there. From gothic rebellion anthems that freaked out one generation, while encouraging another to fly their freak flags, to later introspective songs, Manson has had one of the most interesting careers in music. You could love him or despise him, but it was hard to ignore him. Here’s what we found:

‘Sweet Dreams (Are Made Of This)’
from Smells Like Children (1995)
In the late ‘90s, few things terrified parents more than Marilyn Manson, a name tossed around more than once post-Columbine alongside South Park and Satan. Nothing was necessarily new about Marilyn Manson’s approach to the craft — he was a spooky provocateur in the same vein as Alice Cooper or KISS with a Gen-X revamp — yet he became an easy scapegoat for societal ills, a point addressed in Michael Moore’s 2002 documentary “Bowling for Columbine.” So perhaps it feels rather ironic that Manson’s first real hit was a retooling of a Cool Mom classic, The Eurhythmics’ “Sweet Dreams.” Or, perhaps, it’s more the case that Ohio-native Brian Warner just has a killer sense of humor. The heavily-played video was as theatrical and over-the-top as his moniker, which featured some light self-mutilation and Manson wearing a cowboy hat, covered in black paint and riding a pig. For many, this was the introduction to Manson’s dark carnival, a song that appealed to an audience far outside the industrial fan base. Through the lens of history, the hysteria surrounding Manson (like states passing literal legislation to keep a tongue-in-cheek metal band from performing) seems almost quaint in 2018, when Manson and his gravitas perform in the type of historic theaters that also host Mannheim Steamroller. Even more ironic than an Annie Lennox-penned single launching his career, though, is how a deeply vilified personality turned out to be just another chapter in rock music scaring the olds, while societal sea changes like the #MeToo movement have exposed some of the most lionized celebrities as the actual real villains.—Michael C. Powell

‘The Beautiful People’
from Antichrist Superstar (1996)
Marilyn Manson really used to be able to shake things up, inciting rage in some and fear in others. He spoke to the loners and the outcasts who felt on the outskirts of — or caged by — society, and the banality of its restrictions and expectations. He put the rich and powerful on trial. And his quintessential goth poet rebellion song was “The Beautiful People” — a marching, sharply irreverent rally against the rule makers and the idea of normal. Hypocrites and ugliness are everywhere, barely concealed, he argued. And while he was massively popular for saying these things, he was also wildly hated, probably because he forced the country to look in the mirror. And some people didn’t like what they saw. He was a projection of the dark shit we kept packed away.—Scott Recker

‘Coma White’
from Mechanical Animals (1998)
Manson’s diehards are a contentious lot. I once tried to rank the Antichrist Superstar’s 10 best songs, and never a more virulent comment thread have I seen. That said, I can’t remember any pushback against my vote for his best: “Coma White,” the closer to his peak glam record (or maybe just peak record period) Mechanical Animals. “A pill to make you numb / A pill to make you dumb / A pill to make you anybody else” he croons in his best ‘80s Bowie impression, over purring industrial metal-cum-R&B. Mechanical Animals, as a whole, fixated on the evils of prescription medications and in a fresh, non-hippie way, predicting the modern opiate epidemic with shocking accuracy in retrospect, much the way Antichrist Superstar predicted the school shooting epidemic. Brian Warner remains our last, true rock star, and maybe the genre’s finest Nostradamus.—Joseph Schafer

‘Disposable Teens’
from Holy Wood (2000)
On “Disposable Teens,” Manson really leans into his image as the patron saint of pissed-off kids. He’s definitely never been accused of being subtle, but on this album, and especially this song, Manson puts all of his cards on the table. This was released post-Columbine, and, instead of slowing down when certain parent groups were blaming his music for the massacre, he doubled down, revving the us-vs.-them engines even harder, essentially accusing Baby Boomers of being full of shit. He poured gas on the flames, digging into the widening gaps between generational thought, while, of course, questioning everything that people held sacred, with ominous lines like, “I wanna thank you mom  /  I wanna thank you dad / For bringing this fucking world, to a bitter end / I never really hated the one true god / But the god of the people I hated.” Industrial rock was basically like punk rock for kids who weren’t cool enough to be into punk rock. And he was the genre’s Sex Pistols.—Scott Recker

“The Mephistopheles Of Los Angeles”
from The Pale Emperor (2015)
Why be the Thin White Duke when you can be the Pale Emperor? Like Bowie, Manson is a hyperbolic extension of self, a larger-than-life figure created to confront and rebel against the banality of evil in the world. As the Pale Emperor, Manson filters his glam rock sensibilities through a sheen of darkness and blues, placing himself here as a kind of anti-Pope, a back alley Messiah who has laid himself bare. Manson is taking ownership not just of himself, but of the dark figure he’s made out to be in the public eye, a reclamation of sorts. The video for this track, sees Manson embracing the rock bombast that he’s known for, performing some sort of dark ritual on the vagabonds and rabble gathered before him, admonishing Lazarus, the resurrected man, for having no dirt on him. If anything runs parallel to the story of Mephistopheles here, the dark and shrouded demon of folklore, it’s not any specific person, but more the rawness of exposure and the lack of anything new under the sun. Manson seems entirely bored by the expectations that people have thrust upon him.—Syd Bishop