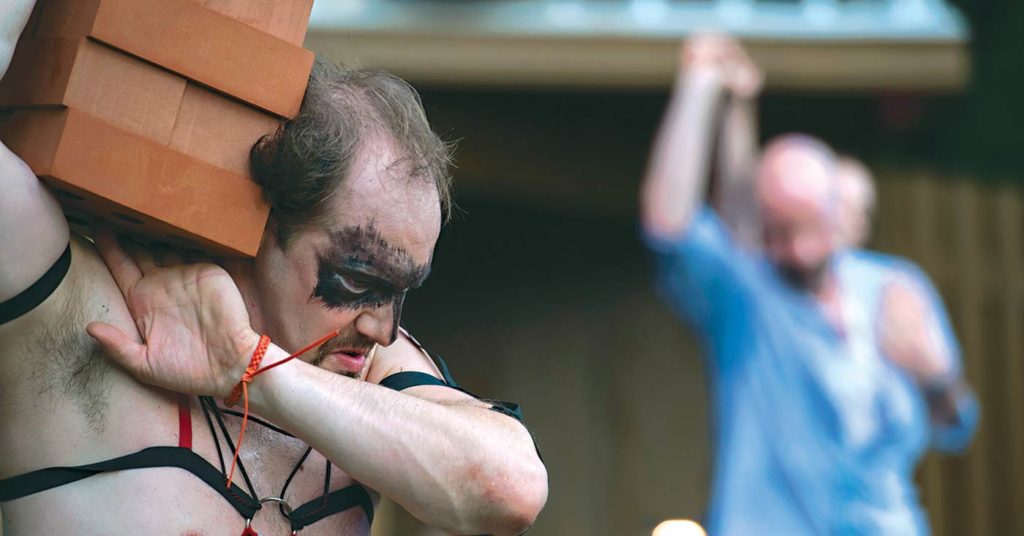 Brian Grant as Caliban in ‘The Tempest.’ Photo by Sam English

“The Tempest” is the kind of play people either love or hate, but wherever you fall, it’s hard to deny that it’s one of Shakespeare’s most visually stunning plays. A violent storm and shipwreck, a magical island and ethereal water sprites are just a few of the images that flow across the stage.

It’s probably for this reason that Roger Creel and Scott Moore of Louisville Ballet decided to adapt “The Tempest” for their partnered performance with Kentucky Shakespeare, closing out this year’s Shakespeare in Central Park Festival last week.

On Thursday night, even the weather seemed to lend an ambiance to the production. A light breeze blew through the audience, and the crickets provided accompaniment to the four-person band as the night went on. It’s the kind of experience you can only find in outdoor theater, and it easily makes up for the August heat.

What makes this version of “The Tempest” different from a story perspective — besides the fact that it’s a famous Shakespeare play with none of Shakespeare’s words — is that the first half hour of the show is all new material. It shows Prospero’s (played by Louisville Ballet’s artistic and executive director, Robert Curran) backstory, rather than having him explain it.

We see Antonio (Sanjay Saverimuttu) give him a choice between his infant daughter’s life and his position, before the villains strand him, cradling Miranda, on an island to live out his banishment. We watch the magician Duke prove himself to the sprites and rescue Ariel (Trevor Williams) from Caliban (Brian Grant). We watch Miranda grow from a baby doll wrapped in a blanket to the young Maya O’Dell, learning from her father how to dance and swim and finally into the graceful heroine we know and love, played delightfully by Shelby Shenkman.

Usually, I find Prospero a hard character to enjoy. His bitterness and need for revenge is understandable, but his cold, calculating demeanor isn’t exactly endearing. But seeing his story from the start makes me more sympathetic to him, as does Curran’s father/daughter chemistry with Shenkman. Their dances are tender and affectionate, giving Prospero a warmer center.

Ariel’s backstory, too, adds nuance, showing him not just as the servant of Prospero but leader of the sprites. When Prospero first rescues him, he’s overjoyed and eager to serve him. Even later in the story, he carries out his tasks with mischievous pride and delight. He’d just prefer it if he were free to do so. Williams steals the scene and earns an eruption of applause almost every time he was on stage, moving as if the laws of physics simply don’t apply to him. His costume, made with sheer, flowing sea blue cloths, also stands out.

Throughout the show, I find myself wishing I could focus on everything at once. Caliban is a perfect example of this. Especially in Act I, he seems to be in almost every scene, just at the corner of the stage, working with increasing frustration (kudos to Grant, by the way, for carrying that stack of bricks across stage and even through the audience multiple times and not breaking his back). There’s always something brewing in the background, which is why it was interesting that the tempest itself takes almost no time at all. But after all, the show is more about what comes before and after.

The band grasps this brewing tension perfectly. This isn’t a traditional orchestra by any means, and the show is better for it. The band (John and Scott Moore, Charlie Patton and Dan Dorff) is exceptionally talented, but there’s almost a feeling of a group of musicians on an old wooden ship entertaining the crew on long nights at sea. They use mostly strings — violin, cello and two guitars — and percussion, which gives the music a raw feeling, sometimes playful, sometimes taught. During heightened moments, it’s fun to watch Scott Moore absolutely shred his violin. John Moore’s tenor saxophone adds jazz sensibilities and sometimes romance.

Turning every conversation into a dance shows just how much Miranda leads in her romance with Ferdinand (Rob Morrow). Their first two dances both start with Miranda coming upon a lost, lonely Ferdinand and drawing him into a duet. In one particularly adorable moment as they introduce each other, they both stretch out to shyly touch feet before circling back. In both dances, it’s Miranda leading and encouraging him, and he follows along with hearts in his eyes. It’s also an interesting parallel with her father, whose commanding presence makes every other character follow in his steps.

Although less often on stage, Clara Harper’s Trinculo is a riot, somehow at once skilled and graceful, bumbling and slapstick. Antonio and his partner in crime, Sebastiana (Ashley Thursby) were delightfully scheming but almost never quite succeeding. Emma Rose Atwood as the court advisor Gonzala offers a sweetness and optimism to the conniving, courtly bunch.

The audience having seen for ourselves all the reasons Prospero had not to forgive his enemies, it makes it that much more magnanimous when he does, even reuniting Queen Alonsa (Emily Reinking O’Dell) with her son, Ferdinand. The last scene in the show leaves the audience with beautiful imagery. As Prospero surrenders his magic, the cast takes Japanese lanterns and carries them through the stands to the back of the crowd. But if you look back at the stage in that final moment, you see Caliban creep back into view. Then the lights go down, and it’s over.