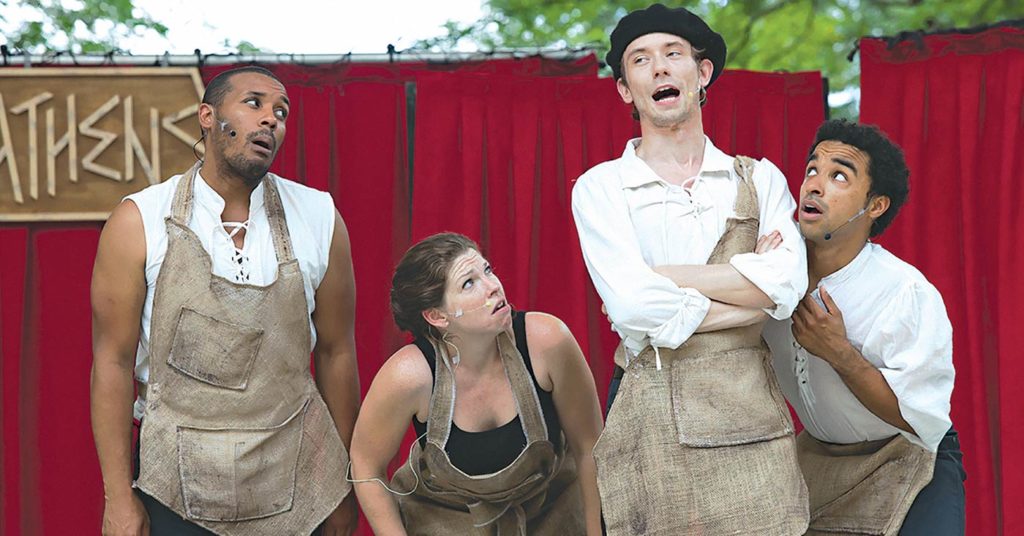 If you had told me a month ago about a production of “A Midsummer Night’s Dream” with a minimalist set and a cast of only six, I would have been confused at best and maybe a little dismissive. But that’s what I found last Sunday at Central Park: small cast, small stage set and even small programs! (More like an invitation to have a mobile program texted to you, a nifty new way to save paper.)

Although it’s the penultimate show in Kentucky Shakespeare’s Shakespeare in Central Park season, this production actually came courtesy of Cincinnati Shakespeare’s Company’s Shakespeare in the Park summer tour. So I didn’t know the cast or the director, Caitlin McWethy, beforehand. “A Midsummer Night’s Dream” should be immersive forest scenes and fantastical faeries, not to mention a massive cast to hold up the many storylines chaotically zigzagging around each other.

I’m so happy I was wrong.

Six people played a total of 18 characters, so, for instance, Amber Baldwin was Helena who was also Titania who was also Hippolyta who was also Snout. This sounds like a recipe for disaster, but it was actually brilliant. The show was introduced by the whole cast and, throughout the show, there was less of a barrier between us and them. One example was the declaration of Puck (Kahla Tisdale), “Here is the maiden!” gesturing toward an audience member before awkwardly apologizing and finally spotting Hermia on stage.

The small cast made me pay attention to characters in every storyline. Demetrius (played by Joseph Bussey) was as ridiculous as he should be, which was even richer when the actor switched roles to play Nick Bottom. Jude Walker is the Hermia whom I always pictured, but she was just as well-fitted for the role of Peter Quince. Michael Morrow switched seamlessly from confident Theseus to mischievous Oberon to timid Snug. You could practically get a whole audition tape for everyone in this cast just from their performances in this play.

Let’s talk about Puck and the faeries. Again, usually, these scenes tend to have high aesthetics, but Tisdale (along with the rest of the cast) brimmed with energy and captured the utter whimsy of the faeries. They focus less on the look of the magic and more on the movement of it, pulling mortals to them in their sleep, and making Oberon hit himself in the midst of a fight. They break into dance numbers and turn Shakespearean monologues into rap breaks. They take advantage of their invisibility by weaving in and out of the mortals, freezing them, and moving them around for fun. They were chaotic and cruel and everything they should be.

One of the best Puck scenes added to this show is Oberon commanding, “Take off his head,” meaning “change Bottom’s head back to a human one.” Instead, Puck responds by picking up a massive executioner’s ax and nearly gets away with it before Oberon sees and shouts “Puck, no! With magic!”

The four lovers felt more fleshed out by a lot of subtle choices, which is the kind of thing I live for. Hermia initially hesitates when Lysander (Brandon McCoy) proposes they run away and again at the idea of leaving Helena. (She also wavers briefly in her resolve not to sleep with Lysander in the woods.) Demetrius and Helena share a brief, lighthearted moment, pre-faeries, that actually made me root for them as a couple, maybe even more than Hermia and Lysander. In that moment, Demetrius actually dropped some of his self-importance and ridiculousness and seemed — dare I say, likable? …Before he remembered to hate Helena and went back to being a dick, basically.

Hermia and Lysander had this bit in which Hermia would blow Lysander a kiss and he would “catch it” and clutch it to his chest. It’s exactly the kind of precious thing the love-struck protagonists would do, but I loved it even more when later, under Puck’s spell, Lysander tries to blow a kiss at Helena who only stamps it out in frustration.

Bottom’s thick Brooklyn voice calling out, “Hey yo, Thisbe!” and the discovery of Brandon McCoy’s spot-on Patrick Warburton impression as Cobweb added to the already heightened hilarity of the Mechanicals.

Amber Baldwin’s comedic timing was perfect. Her Helena didn’t just pout and pine, she shamelessly thirsted, fished for compliments from the audience and confidently snapped both Demetrius and Lysander to her side even as she complained that they were mocking her. Combined with Hermia’s inner rage beast — not just fierce but literally climbing back to the top of a cliff after falling because she’s so full of rage, their catfight (complete with faerie intervention) had everyone laughing nonstop.

It’s hard to manage all those character switches in a matter of seconds, but they all pulled it off. In one scene, the production gives Bussey the extra time to change by having Puck drag three of the four sleeping lovers on stage, look back and realize with exasperation that she’s missing one and run off to retrieve Demetrius. It was a clever change that got more than a few laughs.

And what about the last scene? I was a little worried they would have to cut the Pyramus and Thisbe performance, since five of the six actors were playing Mechanicals, leaving only one left for the audience. But Cincinnati Shakespeare came through again, by casting the audience as stand-ins. As Morrow and Baldwin shed their Theseus and Hippolyta costumes, Morrow called out, “Who wants to be the king?” They ran into the stands, handing off their crowns and came back as Snug and Snout, unrecognizable from their past roles. Puck instead served as their audience and heckler and it almost feels like that’s how it always should have been.