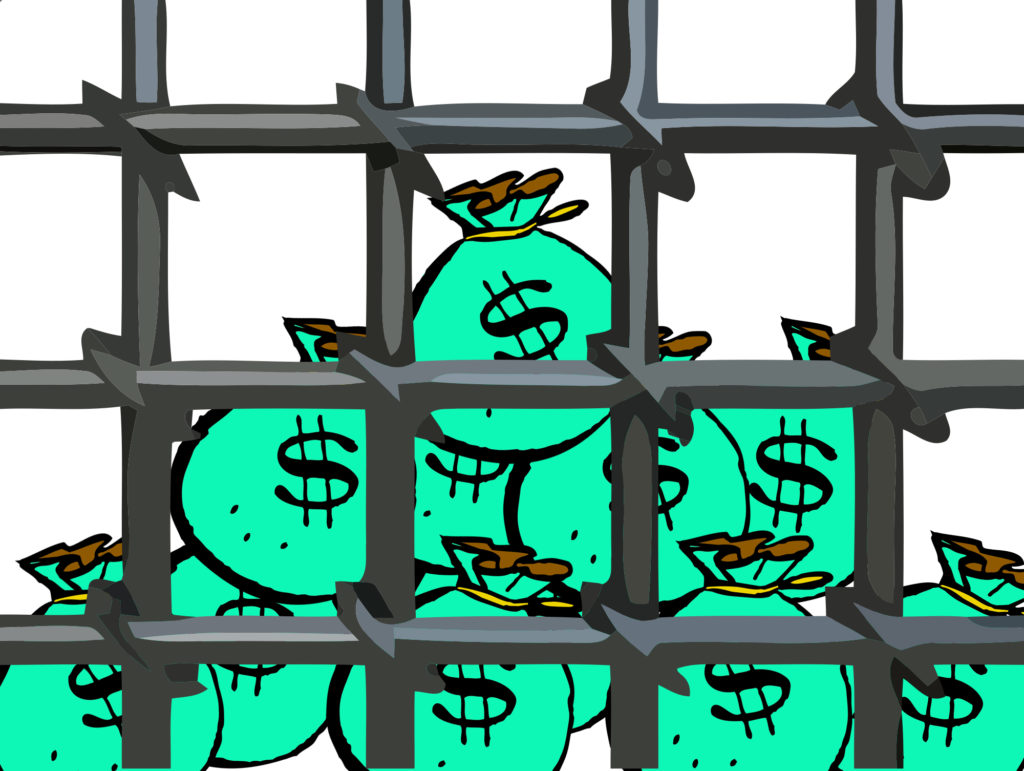 When Shameka Parrish-Wright was 18, she defended herself against domestic violence and was arrested, she said. The judge set bail at $1,000, which Parrish-Wright couldn’t afford to pay.

Her public defender advised her if the case went to trial she could face eight to 15 years, so after 38 days in jail, she took a plea deal on a lesser charge that included time served and two years probation, and then was released. Never again has she been in trouble with the law, but the conviction continues to materialize decades later.

“I took a plea because I had a 3-year-old daughter and needed to get out,” Parrish-Wright, 41, told those attending the monthly meeting last week of Louisville SURJ (Showing Up for Racial Justice), at Louisville’s Central Presbyterian Church. “That still haunts me 22 years later.”

People awaiting trial, including those who could not pay their cash bail, accounted for 95 percent of the growth in the overall jail inmate population nationwide between 2000 and 2014, according to federal statistics.

Some believe denying bond or setting a high bail is necessary, particularly if a defendant poses a danger to the community, but the activists cite the inequitable impact on defendants without financial means. They maintain that judges overuse cash bail, a supposed deterrent for skipping court dates. If they cannot pay, they stay in confinement until a judge hears their case. This can be months, even years away.

The blanket use of cash bail by some judges for lesser, nonviolent crimes also can create a cyclical effect for poorer clients who must remain incarcerated.

“When they finally do get out of jail, they are more likely to go back because they can’t get jobs that they need because they have a record now,” said Courtney Kearney of the Louisville Community Bail Fund, a bail project created by Black Lives Matter Louisville and Stand Up Sunday. “So they’re more likely to fall back into those things that landed them in jail to begin with. They won’t be able to produce bail again and it’s a never-ending cycle.”

Shelton McElroy, national deputy director of operations for The Bail Project, a nonprofit organization that provides bail, told the group cash bail is driving enormous growth in the jail and prison systems.

“If the criminal justice system was a car, bail is the fuel,” said McElroy. “In the current state, if you are wealthy and guilty, you will have a better outcome than if you are poor and innocent.”

Since its first bailout in Louisville on May 10, the group has used $200,000 from their coffers to free 115 people from incarceration, Parrish-Wright said. When those receiving bail return for their trials, The Bail Project recycles that money and liberates more of in need.

To date, only four of its clients have not made court dates, three of whom were in rehab.

A 2018 Harvard Law Review article found research that the United States has some of the highest pretrial imprisonment rates anywhere, and more than four times the world median. Estimates indicate roughly 450,000 people in the United States fall within this category. Data remains limited for this population, but a Vera Institute of Justice study in 2015 revealed around 90 percent of felony defendants can’t afford the judge’s bail requirements.

And that doesn’t take into account other, less-severe misdemeanor counts.

Not only are those charged being punished prior to their convictions, but, because they remain in detention, they have a greater likelihood of losing jobs, public benefits and housing. Even custody of their children is at risk.

Also significant is the impact of bail on a defendant’s sentencing. According to the Vera Institute study, plea bargain deals account for 94 to 97 percent of criminal convictions, with only around 5 percent going to trial. Like Parrish-Wright, those jailed prior to trial might take a plea bargain just to gain freedom, despite being innocent.

“Incarceration is a very strong leverage that is going to make that happen,” McElroy said. “If I can get out today and go to my job, my housing, not have the threat of losing my child, a person will sign on the dotted line.”

Judges have wide latitude when setting bail for defendants.

Annie O’Connell, a criminal defense attorney who is running against Darryl Lavery for Circuit Court judge in Jefferson County, told those at the meeting that courts have alternatives to cash bail. They include monitoring defendants with scheduled drug testing and daily phone-ins. Also, those awaiting trial could be released on their own recognizance, or to a friend or family member.

“They are built into our laws right now,” O’Connell said. “These are available to judges, District Court and Circuit Court, and they are perhaps not exercised as quite as frequently as they need to be.”

The activists believe comprehensive reform at the state and federal legislative levels must happen, but they were not optimistic.

“We have a system that is working very well for people in power, and it doesn’t matter how good our ideas are about fixing it,” said Carla Wallace, a national and local SURJ leader. “No one will listen to us who has the power to change it unless we can build a broad base, a broad, diverse power base of people to make folks in power do the right thing.”

As for Parrish-Wright, she now helps people in situations similar to hers through her work at The Bail Project. “Working with The Bail Project is a way to attack mass incarceration while working myself out of a job. Every day when I pay a bail, I think about how poverty should never be a crime. Freedom should truly be free.”•

To learn more and help: