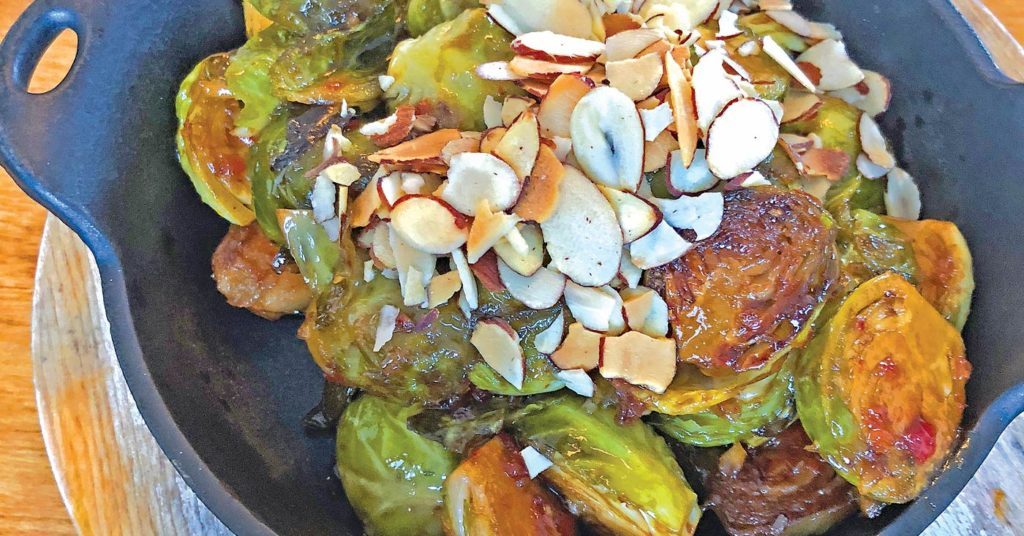 When Portage House Chef Paul Skulas jumped across the river to open Couvillion in Germantown, Chef Dallas McGarity of Fat Lamb added Portage House to his portfolio so quickly that the ovens didn’t even have time to cool down.

I’ve already been over to Couvillion and gave it an unqualified rave May 30. Now, I finally got back to Portage House to see how it’s going with McGarity overseeing the operation. Friends Don and Anne joined Mary and me for an excellent dinner on a pretty summer evening that lured most of the clientele out to its attractive front patio, which affords great views of the Ohio River and the nearby Big Four Bridge.

We thought about joining the crowd outside, but decided to head for the air-conditioned interior to check out any decor changes under the new regime. As it turned out, it appears that the new team stepped right in and started cooking; there wasn’t much need to change the simple, comfortable old-house look of the 150-year-old house with its off-white walls, dark-green woodwork, hardwood floors and undraped wood tables.

We grabbed a window table with a great riverside view, in a small room just off the bar, and settled in with a cocktail and a beer while we studied the menu. I was happy with a Cubre libre ($9). A Mexican spin on the Cuba Libre, it improves the old school rum-and-Coke cocktail by swapping in Flor de Caña anejo tequila, a Mexican Coke reduction and whiffs of lime and orange bitters, served ice cold in a short glass. Don rated his Louisville-brewed Mile Wide Gothic Castle IPA ($11) “OK but not phenomenal,” but added, unhappily, that he’s never before paid $11 for a pint of draft beer. (Regional craft pints, in fact, were $9 to $11; the Pennsylvania-brewed Yuengling lager is $7.) Wine, liquor and cocktail menus are more competitively priced.

The Portage House menu is billed as modern American cuisine. You can see the Fat Lamb connection in some similar dishes, but Fat Lamb’s Mediterranean accent turns all-American Heartland here on the Southern Indiana shore. McGarity’s new menu also kicks up pricing. The former menu’s entrées ranged from $13 to $21, not counting a $35 steak big enough for two. Now, entrées run from $16 (for a griddled double cheeseburger) to $32 (for a garlic-rubbed New York strip), with most dishes in the middle to upper teens.

We started with shared appetizers and were happy with both. Cornmeal-fried Gulf oysters ($14) were particularly good. A dozen oversize oysters, a generous portion, were clad in plenty of crisp, flaky coating, fresh and tender within. They were topped with a dab of crisp, peppery frisée and accompanied with lemon chunks and mayo-based tartar sauce. Roasted Brussels sprouts ($11) made this widely-loathed veggie more than palatable with sweet caramelization, a coating of taste bud-tingling sweet chili vinegar and thin-sliced almonds on top.

Moving on to the entrées, the seared duck breast ($26), a dish shared with the Fat Lamb menu, was one of the hits of the evening. A large portion was seared to perfection, tender and tasty, succulent, but not excessively fatty. The tart-sweet, vinegary cherry agrodolce sauce helped moderate the natural fat, and it was accompanied with small portions of spinach, frisée and zucchini and a plentiful ration of big, tender gigante beans.

The rock shrimp and grits entrée ($22) was built on rich, creamy polenta rather than the traditional grits, and that was fine with me. A bounty of small shrimp, tasty if a bit tough from overcooking, was poured over the polenta with bits of kale and a dark, roux-like bacon-butter broth.

Ricotta gnocchi ($18) were tender, fresh-pasta cylinders made in-house with ricotta and flour. About 10 gnocchi made a hearty portion, lightly dressed in a fresh tomato cream, spinach leaves and grated Parmigiano.

Three large, seared scallops ($28) mirrored the shrimp-and-grits with creamy polenta base. They were topped with a mini-salad of spinach and frisée and heavily finished with broad stripes of balsamic, an affectation that I’d just as soon do without.

One dessert, four spoons: A delicious peach cobbler ($9) — I think it was technically a crisp, but that’s being picky — was topped with a scoop that looked like ice cream, but tasted like mascarpone. It made a fine finish to a filling meal.

Dinner for four, with shared appetizers and two drinks, came to $156.96. I added a 20-percent tip to our share for two.

Noise level: We were alone in a small dining room, so all the noise came from our table, making conversation easy, despite undraped tables and hard surfaces. Add more parties at adjoining tables, and the level would rise. (Average sound level 65-73 dB.)
Accessibility: Stairs bar wheelchair access to the front door of this 1870-built dwelling, but there’s an accessible entrance from the rear.