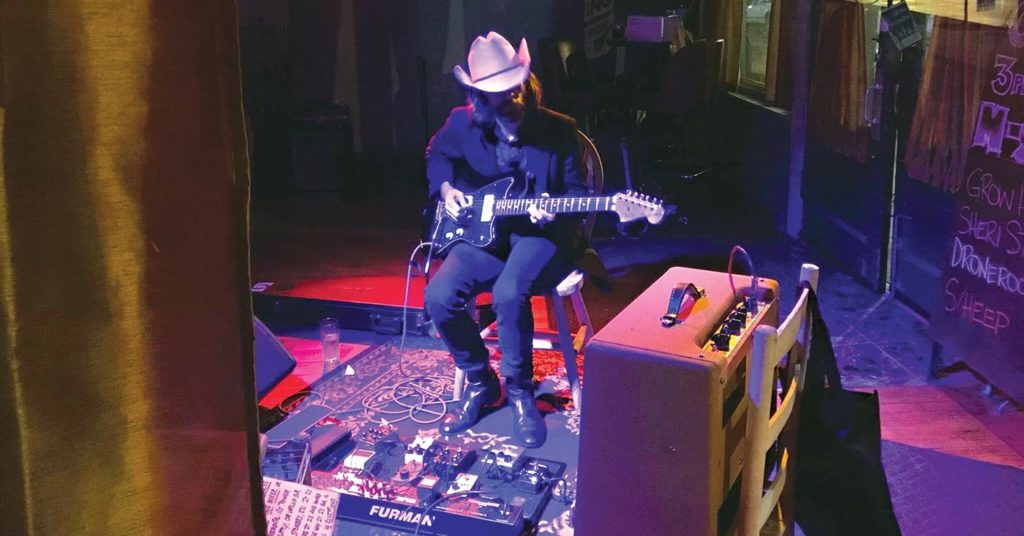 droneroom’s Blake Edward Conley equates his song, “Dancing Plastic Flowers,” to the musical equivalent of a  choose-your-own-adventure novel — you can always find a new path to journey down. Conley laughs in an attempt to explain.

“Well, instrumental music is sort of a weird thing to imply meaning on it, to be honest with you,” Conley said. “When you have a project that has lyrics, unless they’re very vague lyrics, you can pick up a theme that a person is wanting to express with it. Or you pick up your own relation to the work. With instrumental music, I like that nebulousness of where the listener can figure out their own feelings from it, or whatever kind of storyline it might make them feel or think about. I find it much more interesting when other people talk about how it makes them feel.”

“Dancing Plastic Flowers” starts off peacefully, a lonely guitar melody swimming out into a lonelier sea of sounds, with sharp jabs of twangy drones. An unpredictability begins to boil. Loops and layers collide and fold into previous ones, culminating in a small wall of sound that eventually melts back into its beginnings, the song fading into a playful video game coda.

“It was the first piece that I started in my heavy, heavy loop-based approach in writing music,” Conley explained. “I wrote it coming off of 32 into 33. I got my hands on a looper that had more than five to 10 seconds of loop time and was able to explore the idea of expanding pieces out by using longer loops. This was the first song I wrote using my current approach with droneroom.”

“Dancing Plastic Flowers” is part of a batch of songs that Conley created during a very specific time in his life. He was going through several changes and upheaval was a major theme in his life.

“The record is called Jesus Year because all the pieces were written around when I was 33, which was a very interesting year for me,” Conley said. “I got divorced and branched out on my own as a person — as I’d gotten married very young. I moved away from Nashville after living there for 10 years. And so, after that, I found myself with a lot more freedom as a person to explore things and have experiences with things that I didn’t experience before. I also met my current partner during that time as well.”

With droneroom, Conley approaches music in a more old-fashioned sense. He recorded “Dancing Plastic Flowers” live. He prefers to makes albums, not singles. He prefers exploration, not perfection. And yet modern day inconveniences have still found a way to wiggle in.

“The funny bit about the ending of the song, that part that sounds like you’re playing an Atari game, was intended to be a hidden track, like its own piece, you know,” Conley said. “Except that you can’t really make that work with digital files or on a cassette tape. So a lot of people consider that the ending of the song even though it was just a weird, little goofy thing to wrap up all the music that comes before it. I’m fine with people thinking that, but it’s always made me kind of laugh.”

‘Dancing Plastic Flowers’ is from the album Jesus Year (2018)