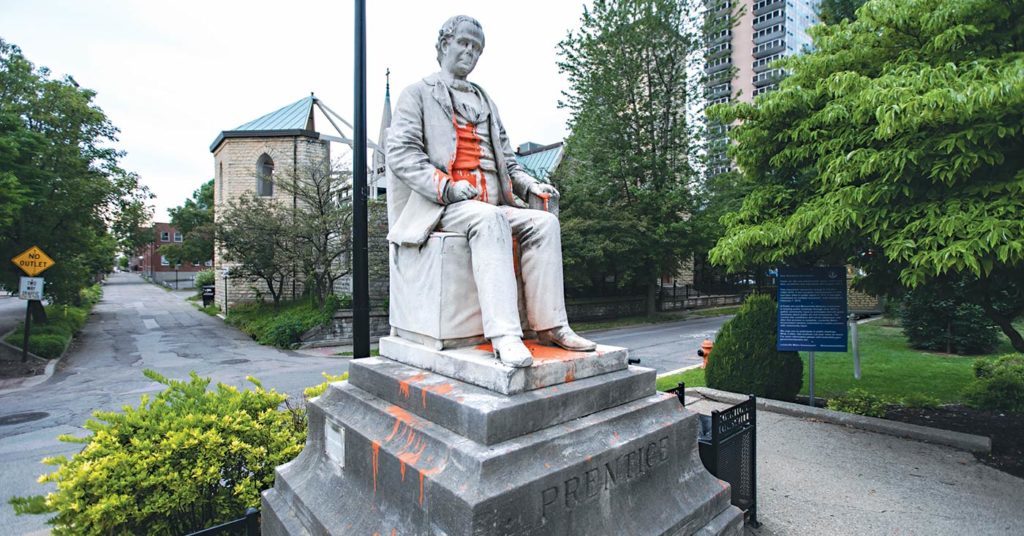 A new documentary titled “Our Library,” a look at the impact and importance of the Louisville Free Public Library, will air on KET later this year, and it includes a brief study of George D. Prentice, the journalist forever linked with the Bloody Monday riots.

In the documentary, singer-songwriter Will Oldham portrays a librarian who narrates the story. One goal of the film is to contrast the legacy of Prentice’s bigotry and the welcoming and public nature of the library.

An uncirculated preview clip shows immigrants of all nationalities gathering outside the library in preparation for the annual naturalization ceremony held there, the irony being that it’s likely none of them know the history behind the Prentice statue they had just walked past.

Library visitors instantly recognize the statues of Abraham Lincoln and Benjamin Franklin, but not the Prentice statue. “Our Library” will help tell that story, and briefly touch on Prentice’s legacy and story.

The naturalization ceremony, filmmaker and writer Morgan Atkinson said, “is something Prentice would have had some misgivings about.”

At the same time, Atkinson delves into the complex nature of Prentice, and the realization that he was not “a black and white villain. He had this long list of many positive things that he did.”

The main goal of the film, however, is to show “how essential a place is where people can find truth and facts in a safe place to search them out.”

“Our Library” will air in late October.