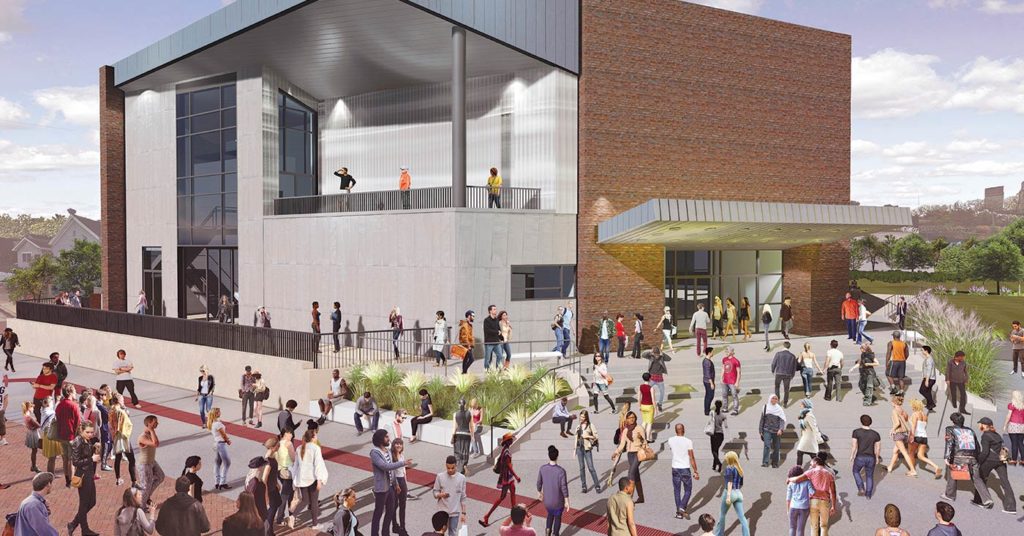 Hidden behind the 1936 L&N Railroad overpass off East Broadway is the small, sleepy neighborhood of Paristown Pointe. The popular breakfast and lunch restaurant The Café, nestled in the V made by Brent and Vine streets, is prominently situated near the train bridge. The 203-year-old, functional pottery company Louisville Stoneware is down the street on Brent. Rounding out the neighborhood are slightly rundown warehouses, small businesses and shotgun houses.

New construction, for the first time in decades, is changing the streetscape. An arts and entertainment district, called simply Paristown (paristown.org), is slowly emerging.

The proposed complex has three main components: Louisville Stoneware and second locations for The Kentucky Center and Goodwood Brewing Co.

After a $6 million renovation, it will be rebranded as Stoneware & Co. The headquarters will be known as the Stoneware Art Factory, Museum and Visitor’s Center featuring upgraded retail and tours. The renovation is expected to start in September of this year and open in the summer 2019.

Stephen A. Smith, managing partner of Paristown LLC, member of the Paristown Preservation Trust and CEO/owner of Louisville Stoneware, said the Stoneware project and the entire development is meant to become another focal point for the community.

“How do we turn this into a tourist designation? We need to be one like Louisville Slugger,” he said. “We want to be the No. 1 attraction in town.”

The new venue, The Kentucky Center at Paristown (kentuckycenter.org), is by Kulapat Yantrasast of wHY Architecture, the firm that designed the addition to the Speed Art Museum. The 28,000-square-foot building will hold 2,000 people and cost an estimated $12 million.

It is expected to host up to 100 events a year, with Louisville Orchestra concerts adding 15 more. A nearby green space will be available for outdoor public events. Yantrasast will also coordinate the overall design of the project.

It was started before the other projects, with the groundbreaking in September 2017. It is expected to be completed mid-2019.

The last major section of the arts district puzzle is Goodwood Brewing Co. (goodwood.beer). CEO Ted Mitzlaff, a longtime business partner of Smith’s, said he was asked to be part of the complex because “they thought the brewery would be a tremendous asset to Paristown.” The Kentucky Center was especially interested in having such a facility nearby for patrons. The 50,000 square-foot building will house a taproom and brewery (a micro-distillery may be added later) at a cost of $1 million. Renovations of an existing building are expected to start soon and be finished in about a year.

Other venues are expected, such as Number 15, the first food hall in Kentucky. The 12,000-square-foot building, described as “[bringing] four individual chef concepts under its roof,” is budgeted at $6.5 million. It should start building this autumn and opening next October.

Show us the money

The overall budget for the arts and entertainment complex is said to be $28 million, but Smith estimates it’s going to rise to $30 million. The funds are from sources including state tourism tax credits, participating businesses and Louisville Metro Government, which gave $2.2 million for streetscape improvement.

The Paristown Preservation Trust (PPT) partners are Howard Vogt, president of Rodes For Him & For Her; Brian Forrest, partner at Sun Properties/Hoagland Commercial Realtors; Mitzlaff and Smith.

Smith began working with the Kentucky Tourism, Arts and Heritage Cabinet in 2013 to get the state tourism tax credits, which let developers recoup up to 25 percent of their investments (in this case, $6.4 million total).

This neighborhood resurgence is coming about because Smith wanted to save his company.

Louisville Stoneware has been part of Paristown Pointe since the ‘70s.

The 50-acre neighborhood, established in 1854, was originally called just Paristown; Pointe was added the same decade Louisville Stoneware moved in. Its boundaries are East Broadway, Barret Avenue, Breckinridge Street and the train track that runs alongside the south fork of Beargrass Creek. Better known neighborhoods, such as Germantown, Smoketown and The Highlands, surround it. As Smith explains it, “Paristown is the development. Paristown Pointe is the neighborhood.”

Smith has owned Louisville Stoneware for about 10 years. As a history buff, he is fascinated by the two-century story of the company and stoneware pottery in general.

Stoneware is a sturdy ceramic usually used for utilitarian purposes. The first stoneware pottery in Louisville, Lewis Pottery, opened in 1815 and supplied households, travelers and businesses with salt-glazed storage vessels (Smith calls it “the Tupperware of its day.”) The company changed names over its long existence; the title Louisville Stoneware came about in the early 1970s.

Its most popular designs can be decades old, including the Bachelor Button pattern created by artist Edith Ellis. Mamie Eisenhower used Louisville Stoneware dishes with this pattern in the White House during the Eisenhower presidency.

The Paristown development idea started with a worry — how to keep Louisville Stoneware viable. Some of the employees’ history merges with the company’s, with a few working there 30 years or more. “The business is healthy now,” said Smith, “[but] I wanted to save the pottery company. This is their home, this is their life. How do we save this place?”

Smith started asking friends and business associates for advice on how to keep Louisville Stoneware financially stable. The answer? Tourism on a grand scale.

Because of this quest, Smith has led the Paristown project for the past five years.

Gentrification by way of art is nothing new. On a grand scale, there’s the Guggenheim Museum Bilbao in Spain, an extension of New York City’s Guggenheim Museum. As a major tourist attraction, it’s been credited as reviving the city.

2013 was a pivotal time for the development, for that’s when Smith said, “We quietly started buying land.”

It was also the year when Smith learned The Kentucky Center was looking to expand to a second location. He, of course, pitched the Paristown Pointe neighborhood.

“The Kentucky Center was looking to diversify and expand its family of venues … to reach new audiences and artists and to fill a gap in the marketplace,” said Kim Baker, president and CEO of The Kentucky Center. “We wanted to find a venue that would be open, social and flexible, with fantastic acoustics and that would provide a great artist and customer experience.”

After looking for years and considering several locations, The Kentucky Center decided on being part of what will become the Paristown arts and entertainment complex because it “offered us the most potential,” she said. “We also decided that building new would allow us to create the most unique and flexible space possible.”

Although that’s what it is called now, don’t get used to the name The Kentucky Center at Paristown. “The final name is a work in progress,” Baker said. “For more than a year we have researched and developed names that we have tested in the market. We are considering those names among others, working in collaboration with our title sponsor, still to be announced. We will more than likely announce the title sponsor simultaneously to the venue name.”

Parking was a major concern for The Kentucky Center. Before it could say yes to the Paristown project, it needed to know whether there would be enough available parking spaces. PPT has now bought property along Swan and Vine Streets that will be converted into 400 surface lots.

In 2017, the developers created a 501c3 organization called Paristown Salon. To help the neighborhood, 1 percent of all sales and services from the Paristown arts complex will be donated to Paristown Pointe for preservation, safety and its economy.

Goodwood Brewing’s Mitzlaff told me to make sure I talked with Smith, “as he is truly the visionary.” Smith is still surprised by how the Paristown development has grown (it now covers 6.8 acres) and what it plans to achieve. It’s been estimated that 250,000 visitors a year will come to the complex. While some of the buildings could be completed sooner, all of the Paristown arts and entertainment district should be open by December 2019.

Paristown Pointe will be sleepy no more. •