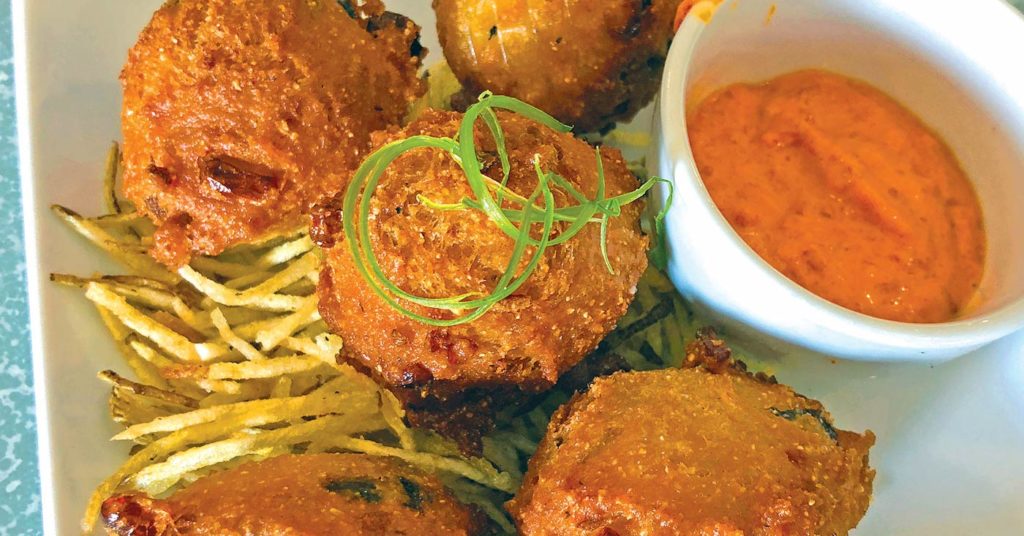 Grilled corn and jalapeños kick up the hush puppies at Kaelin’s.

Kaelin’s is back, and it has got cheeseburgers!

Well, let’s parse that a little: Meet the new 80/20 @ Kaelin’s. It’s not like the old Kaelin’s, but it’s certainly rooted in the mystique of the beloved old eatery at Speed Avenue and Newburg Road.

The original Kaelin’s was a Louisville favorite for most of the past century, family-owned from 1934 until its family owners sold the business in 2004. Owner Carl Kaelin was allegedly inspired to invent the cheeseburger on a brisk October day in 1935. (This may sound like an urban legend, but if Kaelin wasn’t likely the first human to put cheese on a burger, his bragging rights for having coined the name and placed it on a menu seem well established.)

The restaurant sputtered along for a while as Kaelin’s and later as Mulligan’s, but it closed after a few years and remained vacant until partners Chris Fenton, Bill DuBourg and Matt Staggs bought the building and undertook a major rehab. The dramatically-renovated 80/20 @ Kaelin’s opened last month and appears to be drawing capacity crowds nightly. The name Kaelin’s pays homage to the old place; 80/20 represents the lean-to-fat ratio in a good hamburger.

The new Kaelin’s certainly has burgers. You’ll find eight on the appetizing menu, ranging from $12 (for a black bean burger) to $16 (for a fancy beefburger made with a New York strip steak, tri-tip and sirloin blend).

The menu also features a load of apps, soups and salads (from $6 for heirloom tomato and watermelon gazpacho to $16 for the slider trio of the week). There’s also a slate of bistro-type entrées that range from $17 (for a dark-meat fried chicken plate) to $22 (for a prawn and crab cake).

The makeover has retained a neighborhood bar feel, but expansive new floor-to-ceiling windows at the rear open the main dining room up to a light and airy space; the now-connected house next door adds a warren of rooms, each with its own style. The cozy bar room is likely to become a favorite gathering place, with its long, U-shaped bar that serves both the room and the comfortable front-porch patio. A comprehensive adult-beverage list includes abundant bourbons, fair selections of wines and mostly-local beers and house cocktails. I enjoyed a well-drawn draught Guinness ($6).

We found our way to the upstairs ice cream parlor room, a pretty, bright room with a ’50s feel, turquoise booths and an old-style bicycle hanging over the mantel.

Three appetizers got us off to a great start: Fried green tomatoes ($7) were cut into bite-sized pieces and deep-fried in a coarse, crunchy cornmeal batter. They’re served with choice of crispy country ham strips or meat-free shiitake bacon, with a tangy buttermilk-dill dip. Hush puppies ($6.50) gained a spicy kick with jalapeños and grilled corn, enhanced by a creamy-spicy piquillo pepper dip. Lollipop drumsticks ($8) were meaty and flavorful, almost gamey, sizable balls of tender drums with crisp skin.

The 80/20 burger ($14.50), heir to the Kaelin’s original cheeseburger, was exceptionally tasty. Made from three cuts of beef ground in-house, it was juicy and flavorful, hot-pink medium-rare as ordered. The pretzel bun showed grill marks. Dressings were unexceptional: a halved yellow tomato slice, a rather tough ring of raw onion, a couple of small pieces of ghost-pepper bacon, barely piquant, despite the pepper’s fierce reputation and thin, yellow aioli-like 80/20 sauce. It was such an ample sandwich that it couldn’t easily be picked up and eaten; better to deconstruct it with knife and fork.

A side of collards ($3) was disappointing, a lump of long-cooked leaves flavored with a couple of small cubes of mystery meat. The fries were better, crunchy and hot, a bit on the salty side.

From Kaelin’s entrée list, pan-seared ravioli ($18) was an interesting meatless option. An idiosyncratic variation, it was constructed from two large pasta triangles sandwiching, rather than enclosing, a seasonal vegetable filling that currently consists of neatly-cubed pink beets in a thick, sweet potato Parmesan broth that also decorated the plate, topped with peppery arugula leaves and a nest of fried, thin pasta strips.

Noise level: The large venue has several rooms with varying sound levels. We dined in the Ice Cream Parlor, a relatively quiet environment; the bar would likely be much louder (Average sound level 64-72 dB.)

Accessibility: The main floor and restrooms are easily accessible to wheelchair users. An elevator gives access to the upper floors.