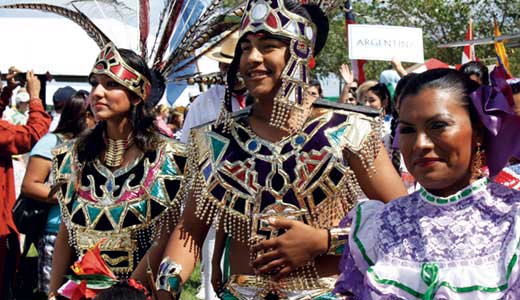 On the Record with Ryland Barton: Ryan Quarles
Mile Wide Beer Co.
Free  | 6 p.m.
Join Kentucky Public Radio’s Capitol Bureau Chief Ryland Barton as he hosts this monthly series of non-partisan talks for people who want to get educated about Kentucky politics. These laid-back conversations feature a new influential Kentuckian every month, and this month’s guest is Ryan Quarles, Kentucky’s Commissioner of Agriculture.

G.G. Moore Park Improvement Project
626 M St.
Free  | 1 p.m.
You know that neighborhood parallel to Churchill Downs? The one you’ve probably paid to park in for Derby or a UofL football game? Well, it doesn’t get much attention aside from those few and far between days. But this Tuesday you can change that by volunteering with Louisville Parks and Recreation to help clean up the neighborhood park. Project tasks include picking up trash, repainting lines on the basketball court, mulching trees and repainting the picnic shelter and picnic tables. If you’re interested, you can sign up here.

FilthyGorgeous : under a Big Top
Mag Bar
Free  | 11 p.m.
FilthyGorgeous is a themed-dance party hosted by N8 and Drew that’s all about filthy drinks and gorgeous people. This party’s theme is Circus, so embrace your inner-sideshow freak and dress the part for this party featuring live music by DJs Sleepy T and Cachet.

WFPK Waterfront Wednesday
Waterfront Park
Free  | 6 p.m.
This WFPK Waterfront Wednesday features performances by Wild Child at 9 p.m., The Suffers at 7:30 p.m. and Katie Toupin at 6 p.m. And for the kids, there is the 90.5 WUOL Classical Corner with popup activities led by Louisville Public Media’s Music Education Manager, Jecorey Arthur, aka 1200. Afterwards, join TAJ Louisville for the FOTW Waterfront Wednesday After Party from 10 p.m. till 4 a.m. Drink specials include $! Off drafts, $3 Fireball shots and an Old One and Cold One, which is a PBR and shot of Old Forester for $5.

Nerd Nite
Gravely Brewing Co.
Free  | 7 p.m.
Nerd Nite describes itself as “TED Talks, but with more beer.” It’s a geek-centric gathering with highly-qualified people giving insightful talks. Presentations for this night include “The Science of Getting Knocked Up” by Dr. Miriam Krause, “The Cult of CrossFit: How to Lift Heavy Stuff Real Fast and Real Good” by Madison Kleinhenz and “What billion$, blood flow, and blind mice can tell you about the brain” by Dr. Aaron McGee. Happy hour starts at 5 p.m.

Mary and Her Monsters
LFPL Downtown
Free  | 6:30 p.m.
Celebrate the 200th anniversary of the publishing of Mary Shelley’s “Frankenstein” and Shelley’s 221st birthday on Thursday with Louisville Free Public Library. The festivities begin with Whitney Thornberry performing her one-woman show “Mary and Her Monsters,” which portrays Shelley’s life before “Frankenstein” and the inspirations that led to the book’s creation. This is the first of many events LFPL will host in the coming months to celebrate this classic novel and author.

Drink & Draw with Kevlen Goodner
Safai Coffee Shop
Free  | 5 p.m.
Local storyteller and visual artist Kevlen Goodner invites you to join him for a drink and some drawing at Safai this Thursday. In addition to the creative space, you’ll also find 2-for-$6 beers, and 20 percent of sales from 5-10 p.m. benefit Black Lives Matter Louisville. All skill levels are welcome.

WorldFest (Aug. 31–Sept. 3)
The Belvedere
Free  | Times vary
Experience the food, music and culture of Louisville’s many international communities at this festival. And you have four days to do it! The event is free, but bring plenty of cash so you can sample as many foods as possible, and you’ll probably want to buy a few crafts too.