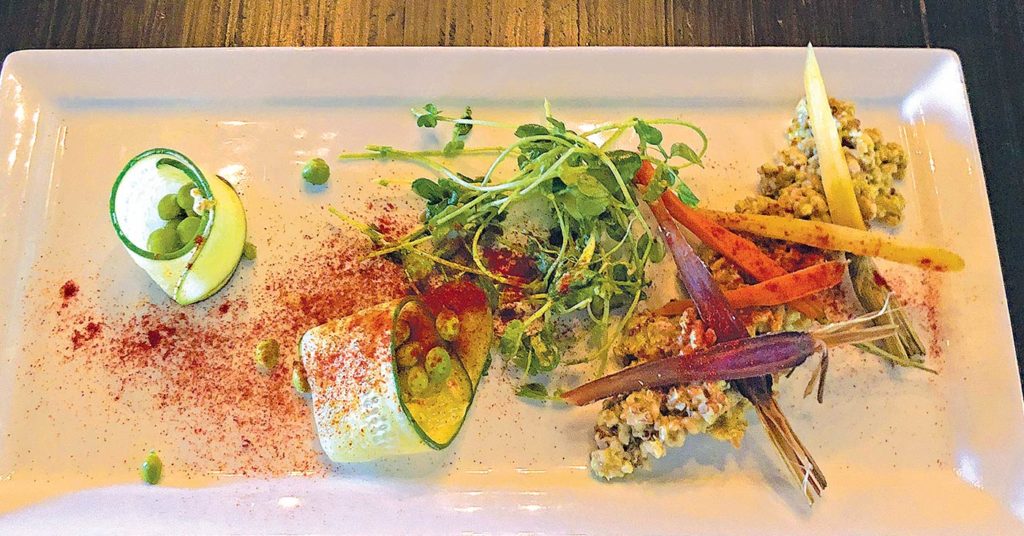 Why did the diner cross the road? To get to Ward 426, of course! Actually, we’d gladly take a quick detour around the block, park down the street and then cross the road to dine at this fine Baxter Avenue eatery.

The issue of minor traffic and pedestrian gyrations on Baxter Avenue is what I’m getting at here: As Highlands commuters know all too well, Baxter will be closed until Aug. 7 by a massive ring of concrete barricades at its intersection with Lexington Road — Ward 426’s front door. It looks scary, but we had no problem zipping around the block to get to Baxter, and there was plenty of parking available.

Ward 426 is the joint effort of chefs Shawn Ward, who was executive chef at Jack Fry’s for almost 20 years and who introduced Louisville to shrimp and grits; Dean Corbett, longtime owner of Equus-Jack’s and Corbett’s; and Nirmesh Agrawal, past executive manager at Corbett’s.

Ward 426 fills the sprawling space that was once The Brewery, with substantial remodeling and decor by Bittners. There’s a dark, classy bar, two al fresco patios, two dining rooms and a small front-window lounge with comfortable sofas and overstuffed chairs. Our group dined in a high-ceilinged room that was a couple of steps up from the bar and has a black-and-white hexagonal-tile floor, a large gray-and-white abstract painting on off-white walls and undraped, heavy wood tables. Wall sconces and oversize brass chandeliers shed gentle light.

The dinner menu starts with 13 appetizers, soups and salads. They range from $8 (for a Bibb salad with warm brie) or, on the app side, $9 (for calamari with a three-olive tapenade) to $18 (for a charcuterie plate of country ham and Capriole Farm cheeses).

Ten entrées range from $12 (for a crispy cod sandwich) to $44 (for a fancy surf-and-turf with beef filet and lump crab in Low Country hollandaise). Hold the sticker shock, though, as only one other entrée (a $35 Maple Leaf Farms duck dinner) is over $30. Three vegetarian entrées (all $18) and three meatless apps ($7 to $8) are segregated in their own menu section.

Warm dinner rolls, a block of cornbread and whipped butter got us off to a good start, but the corn bread sparked controversy: Three of our group (including me) thought it was just fine, coarse and flavorful, not too sweet. Two of us (including Mary) hated theirs, objecting to a funky floral scent that reminded them of hand lotion. Did someone plate them with a lotioned hand? We’ll never know.

Whole, tiny okra pods ($8) made a great appetizer, fried in a thin, crisp, tempura-style batter, piled on a rectangular plate with halved charred heirloom cherry tomatoes and topped with a grated ricotta salata cheese, with crocks of spicy mayo and Worcestershire ketchup for dipping.

Three big, creamy scallops ($30) the size of golf balls were seared and placed atop small fried polenta cakes crafted just to fit. It looked beautiful and tasted wonderful, an explosion of flavors. The polenta was blended with earthy Fontina cheese; and small, mild Clifty Farm country ham and roasted red pepper dice atop golden saffron hollandaise all worked together. Even the pea shoot garnish was peppery and good.

Our tab, with apps, mains, a shared dessert and one cocktail, was $92.22, plus a $20 tip. It was worth the traffic wrangle. As for that sewer project outside, it’s part of Metropolitan Sewer District’s Waterway Protection Tunnel, which aims to store underground the excess sewer and rainwater after storms, until it can be pumped to a treatment facility rather than spewed into Beargrass Creek and into the Ohio River. That’s a good thing. •

Noise level: Undraped tables and hard surfaces can amplify crowd noise, but conversation is possible, unless diners at a neighboring table get rowdy. (Average sound level 68-75 dB, with peaks to near 90 dB.)

Accessibility: Steps prevent access between dining rooms and the bar, but the restrooms are equipped for access; and there’s wheelchair access to the dining rooms via level entrances from patios on the Baxter Avenue side and at the rear of the building.