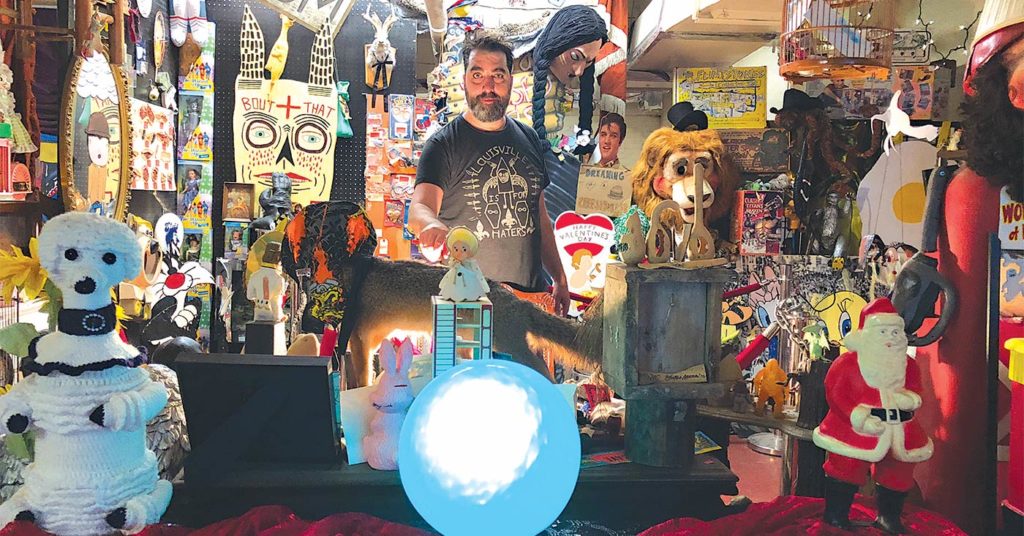 Will Russell and his collection. Photo by Lorna-Mae Ward

Following the Funtown Meltdown, I was left with a mess of epic proportions. Staggering legal and financial complications, destruction of my personal relationships, heavy restrictions on access to my daughter and, quite literally, a massive pile of junk. All of this fallout was overwhelming to the point that I truly believed I could not make it through. Every agonizing day I wanted it all to end and came dangerously close to enacting a permanent solution to what turned out to be temporary problems.

This pile of junk composed of odd debris from the failed attempt to create an amusement park called Funtown Mountain in Cave City, Kentucky, sat in a basement, and I simply could not deal with it. I couldn’t even look at it and felt so ashamed every time I would see it looming out of the corner of my eye. This pile of shame, I slowly started to dismantle over time. Piece by piece I picked up each object, looked at it and let the memory wash over me. Much of it was painful, some of it was curious, and some of it was just baffling.

Inspired by an art show called “Bubble Guts Enterprizes: The Medicine Cabinet” by Rodolfo Salgado Jr. at Sheherazade Gallery in Old Louisville, I began to arrange these things in the space and created something that became visually very interesting. This was one aspect of the healing process that took on a more abstract dimension and was able to re-energize my creativity. Now known as the “Museum of Grandeur,” this stands as a testament to The Manic Meltdown of 2015. As an exercise in defeating shame, I have decided to include this “museum” as a featured attraction as part of the launch event of the re-imagined WHY Louisville, which is being recreated at The Marvelous Mystery in a secret space, soon to be revealed, known as The Marvelous Underground. This is where we will host our first pop-up shop and give people and opportunity to see what The Marvelous Mystery has in store.

In addition to re-entering the world of local retail, I have been discovering new opportunities in the nonprofit realm with a newly-launched mental health advocacy organization called Everything Will Be OK Project. The mission of EWBOK Project is to normalize the topic of mental health by producing inclusive and entertaining events that will have broad appeal and reach people that would not otherwise be concerned with mental health awareness. We are delighted to have Kathy Dobbins, the acting CEO at Wellspring Mental Health Services, on our board, bringing over three decades of experience in the field of mental health to the table. Additionally, we have Mary Kate Lindsey serving on our board, who is the former projects director at Frazier History Museum and brings her immense experience in the local nonprofit community to the table. While raising awareness for mental health is a serious concern, our aim is to have fun while doing it.

While it was painfully embarrassing to have my struggles with bipolar disorder happen in such a public way, it did create a unique opportunity for me to publicly advocate for mental health. I find it a great honor to be the voice of the countless people out there who feel ashamed, isolated and scared. I say to each and everyone of my fellow travelers that you are not alone and that mental illness is nothing to be ashamed of. I say to the rest of those who may not understand that mental illness is a legitimate medical condition and is entirely treatable. It is incredibly satisfying to take something that was so negative and damaging and do something positive.

So here’s to recovery and overcoming seemingly impossible odds. I am so grateful for my friend who told me to “Just Keep Going” in those impossibly dark times. It was the most difficult thing in the world to not give up in the face of all that adversity, but I am so glad I made it here. There was a part of me that knew that day would come that things would be better and I am grateful that day has arrived. The support I have received from the community has been powerful and moving, and I am incredibly grateful for the understanding and forgiveness I have received.

There are many good things ahead.