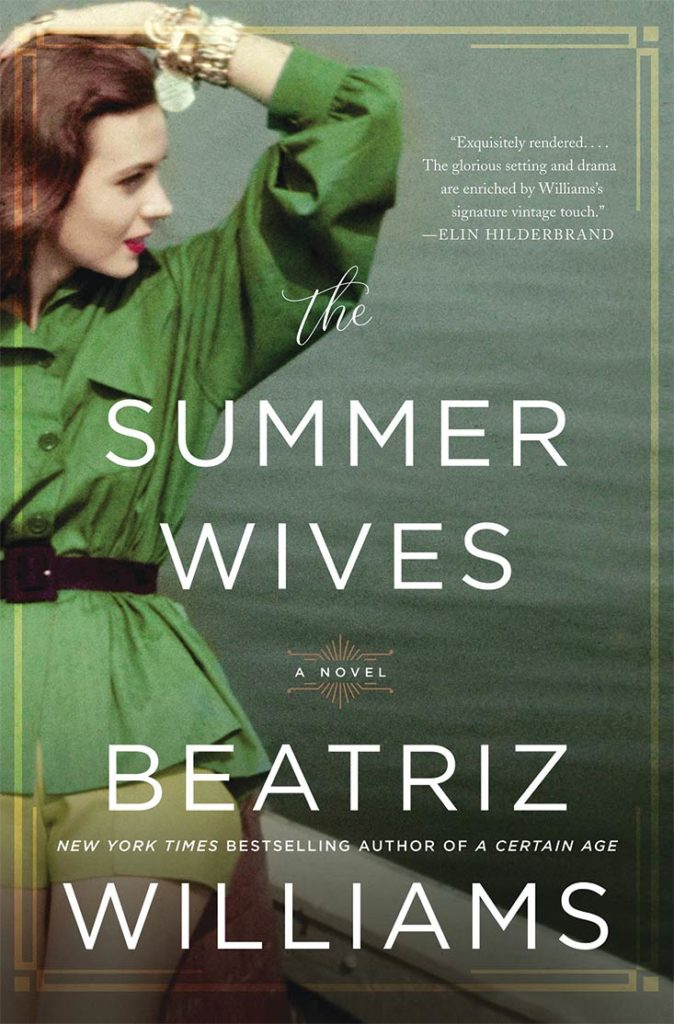 "The Summer Wives" by Beatriz Williams

Oh, you know how it is, darling. You don’t? Never fear, you’ll pick it up quickly. The historical fiction — with culture clash on an island getaway of the rich and bored, in a Gatsby-esque manner. The romance — rich-girl, poor-boy style. The murder mystery — not really a whodunit, but more a device for considering the stakes when we look at outsiders (or insiders) for the possibility of danger. Consider those whose feet are calloused at having to walk on rocks daily versus those for whom it’s a refreshing lark.

And if you still don’t get it — if the modestly-epic scope and the multiple, simultaneous plot threads don’t draw you in and hold you fast — then the very experienced author will whisper knowing asides. As if you, the reader, were a new summer friend, thrust among the old-moneyed who are ready to cut off interlopers through hasty judgments: “I don’t know if you’ve ever had that experience, a churchful of well-dressed strangers all staring at you in astonished disapproval. I don’t recommend it.”

Williams doesn’t need to sidle up to you to effect an easy intimacy — but she clearly wants to show generosity with which to maintain a loyal readership. She’ll get around to revisiting the crime that was supposedly an open-and-shut case. She’s also going to show you how the glitz that held onto generations fades with the rise of a middle class in the middle of the last century. It’s potentially a lot to do, but Williams doesn’t want you to feel that you or her, are being made to think hard.

The first 100 pages move gently, if not slowly. But they introduce an aspect that might challenge you if you’re not paying attention: The narrative is divided into sections each from three time periods, with 20-year gaps between. Two of the time periods are narrated by a woman who stumbles into the path of becoming a film star, and the (less successful but still compelling) third is from the island’s working class whose life choices are almost completely borne of desperation. Of course, we’re meant to see parallels as well as contrasts.

Throughout the middle of the book the bread crumbs of the mystery are dropped with greater frequency. We come to know the actress as she returns to the island for a hiatus. The author can, at times, let this character’s words tilt toward the overblown (“I thought I was used to handsome, I was used to men whose looks arrived from some different universe, some territory of the gods, like Valhalla … ”), and we also get some sex scenes that, with one obvious exception, give off a whiff of ickiness. The prose doesn’t stay in the realm of bodice-rippers too often, and the character development from the early chapters provides a sturdy foundation for the last several dozen pages that wrap up everything at breakneck pace.

There’s not enough substantial detail to thrill the purest fans of historical fiction. And the twists in the murder mystery aren’t going to have Gillian Flynn looking over her shoulder. But a little of everything can add up to a lot of relaxed entertainment. That’s what Williams aims for and delivers.