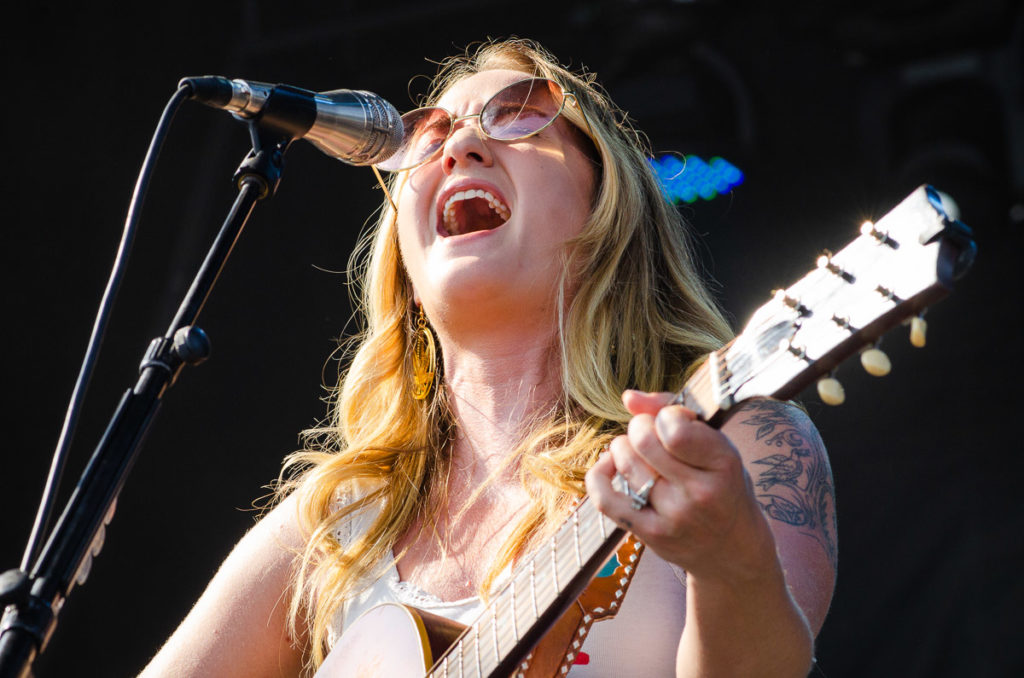 Margo Price (photo by Nik Vechery)
West End Showcase
Any set that starts off by dissing Gov. Matt Bevin and his bullshit is already all right in my book. Shout out to poet and set emcee Lance Newman for his presence during the set, which helped to highlight one of the numerous talents in The West End of Louisville, Jecorey “1200” Arthur. Out strolled 1200 to a riot of digital air horns, like the dopest party was about to blast off. Spoiler alert: It did. No surprise that 1200 fucking brought it, kicking out bass-heavy jams, spitting straight fire about gentrification. He’s a dope role model. A children’s choir took the stage next, each singer ready to make their voices heard, repping the California neighborhood with heart. The DJ dropped trap beats, and the sub-bass was turnt, as the kids would say. The first ever Kentuckiana Idol, Chandon Calhoun, brought a cool mellow to the crowd. Goddamn, but this lady can sing, moving from her low key R&B opener to a jazzier, hip-hop inflected upbeat jam. DJ Always threw on “Jack and Diane,” and I laughed out loud. This was the top of their dance-off, and it ruled. They scratched over that beat before mixing in Montel Jordan, which is always the right move. This dance-off, which went on to feature BBD’s “Poison,” resulted in T-shirts thrown into the crowd based on who can get the most live. Tell me that’s not the best. If the mission statement of this showcase was to show off how great the talent is in The West End, then they accomplished it. They killed it with poetry, dance, raps, vocals and DJs..—Syd Bishop

Forecastle Symphony performs “In C”
The evening settled into the clouds, 20 bodies entered the Port Stage, and Teddy Abrams, holding a handsome clarinet, once again introduced a new incarnation of the Forecastle Symphony. “What you’re hearing is a unique performance built just for you,” he said. “At first, you may wonder what exactly is happening, but in about 10 minutes you will totally give in to it — and it should transport you and put you in a very important, much needed, shared space.” That piece which he informed was the minimalist masterpiece, “In C,” composed by Terry Riley in 1964. The music of “In C” is as open-ended as it is structured (as it was visualized by a painted backdrop of the song’s notation). 53 brief measures of music are explored and repeated throughout the live performance, while each musician determines its direction and abiding by the only rule — that no measure shall be backtracked or repeated out of place. The engaged listener gets rewarded with a visceral, meditative experience. “It’s something that we absolutely need,” said Abrams. “It’s meditative, powerful, thought-provoking, and ultimately all about the sense of unity we can find in a single note of music that envelopes the entire universe.” The timekeeper on xylophone was the shining star, maintaining a singular one-note rhythm for the hour-long performance. As the piece progressed, the crowd thinned, and the ones who remained were suddenly bound to the ground — grown-ass adults lying sprawled over the Kentucky Landing lawn. I’ve seen only two other “In C” performances by different groups, and by the end of each one, I leave with a vibrating sense of peace.—Lara Kinne

Margo Price
The first time I saw Margo Price in Louisville was at a much smaller festival. A few years ago, she played at Seven Sense Festival — another event that’s worth marking on your calendar — at around noon. Back then, her first full-length record wasn’t out yet, but those early songs like “Hurtin’ (On The Bottle)” made it obvious that she was bound for big things in the world of country music. Two albums and probably hundreds of shows later, she and her band put on one of the best shows I’ve seen in my four years of Forecastle. I understand that probably sounds hyperbolic, but it was that good. She reminds me a lot of Sturgill Simpson — the big, booming voice, matched with smart and straight-forward lyrics, while she and the band are pushing country sounds in all sorts of meta-modern ways. From new songs such as “Cocaine Cowboys” to Tom Petty covers to jam interludes where she jumped on the drums, Price showcased that she’s become a versatile, captivating performer. She jumped from playing small venues to pretty large venues quickly. When that time comes, some people aren’t ready for it. Margo Price was. And she’s thriving.—Scott Recker

Jenny Lewis
The kind of AM Gold, late-‘70s country that Jenny Lewis plays is super infectious. She has all the attitude of Mick Jagger, the rock and roll sneer, made sublime because it’s pretty clear that she’s all about having fun. Her range is superlative, and she has a great control over the dynamics, both in her voice, and in the compositions that she works with. Lewis is a trip dealing with hecklers: “Thanks for complimenting how I look. I wore this just for you.” She’s not having this bullshit, but not letting it beat her down, either. Toward the end of the set, she played “Next Messiah,” which had a lot of energy — Lewis and her band hadn’t lost a step in this heat after playing for an hour. She’s dancing and hollering, strutting like she meant business. The bass and drums plodded, the light show triggered to the beat, the guitars and organs blazed a kind of funk, country number. And Lewis was always a star, commanding the crowd and making it look as easy as her music makes you feel.—Syd Bishop

Jimmy Eat World
After 24 years together as a band, the guys of Jimmy Eat World are still at it. They might not be as relevant, but they remain consistent with nine studio albums under their belts since 1993, a lineup that hasn’t changed since 1995, and Jim Adkins refusing to age (and possibly one of the few people still harmonizing with themselves in the studio). Their performance at Mast Stage on Saturday was a positive appearance, but it also begged the question of generational gaps — how many of these people really know or care about the music of Jimmy Eat World? I asked the girl next to me if she liked the band we were watching: “Just one song, ‘The Middle’,” she said, and I wasn’t convinced she even liked that one! It was starting to feel like their home state of Arizona in the afternoon heat, or it could have been the warm feels Adkins’ voice will often induce. He was bright eyed over a sober grin as they opened with “Sure and Certain” from their last album, Integrity Blues. The set visited a span of albums from their discography, nearly chronologically, going from 2013’s Damage single “I Will Steal You Back” to 2007’s Chase This Light opening track, “Big Casino.” But Adkins had to switch from a white signature Jim Adkins Telecaster to a red one, when it came to opening the can of worms that is Futures, its title track and its proceeding fan favorites, “Pain” and “Work” off the same album. The timeline returned to present with a very new song (and a really good one) Adkins said they wrote this summer, titled “Love Never.” You don’t have to love Jimmy Eat World to enjoy one of their shows, but they definitely make the effort to persuade you.—Lara Kinne

The War On Drugs
The War On Drugs’ psychedelic indie jams are hazy, mellow waves, perfect for an early evening festival set. They’re a product of modern times, but seem inspired by pioneers such as Dylan, bringing a sharp and innovative sound, with impactful songwriting. For how dense their albums are, the live show does an incredible job of replicating — and expanding — their sound, building sturdy songs that are expertly constructed. They have the good reputation they do for a reason.—Scott Recker