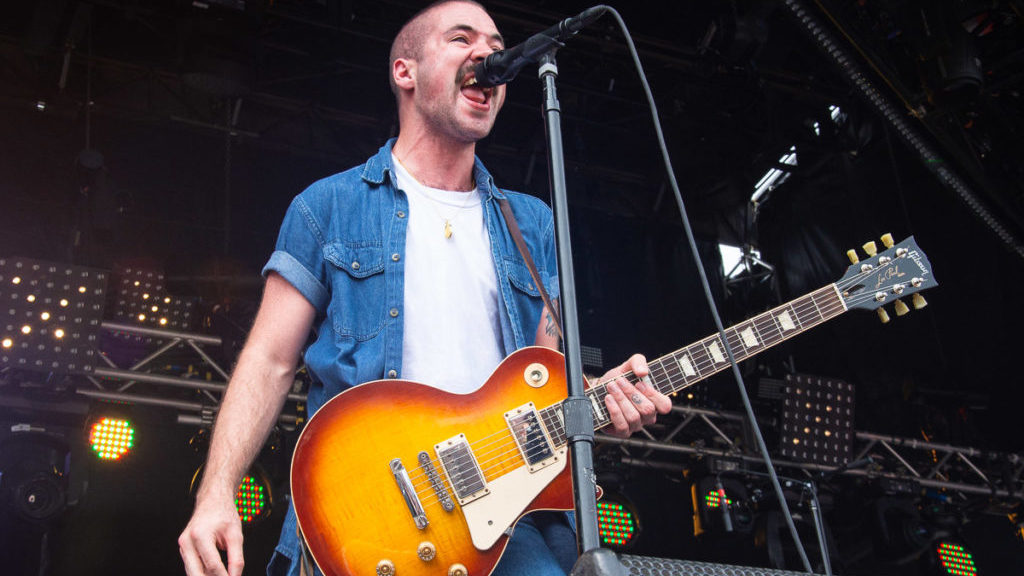 White Reaper (photo by Nik Vechery)
Courtney Barnett
Courtney Barnett is a casualty of cool. Her set at Boom Stage on Sunday confirmed this, and she even sported a French tuck. She opened with three songs fresh from her new album released in May, Tell Me How You Really Feel: “Hopefulessness,” “City Looks Pretty” and “Charity.” She eventually switched from a sunburst Jaguar (a Fender model that her counterpart Kurt Vile is also known to play) to a cherry chrome baby to bring on the back catalog with “Avant Gardener” from her double EP, A Sea of Split Peas, and some established stories from 2015’s breakthrough album Sometimes I Sit and Think and Sometimes I Just Sit — quality, midset carriers such as “Small Poppies,” “Depreston” and “Elevator Operator.” It wasn’t until the end that Barnett wielded her secret weapon, the infinitely-rockin’ single “Pedestrian at Best.” My comrade Jake Hellman (of the Never Nervous blog) said this was the most rock-and-roll thing he’d seen all weekend, and I think anyone in attendance would have agreed. —Lara Kinne
White Reaper
The weather was relatively mild for most of the day Sunday, except for the White Reaper set. The sun beat down, and drummer Nick Wilkerson even left the stage at one point, looking pretty sick, but, in true White Reaper fashion, he came back and blasted through another half hour or so of riff-driven, hook-filled songs that kneel at the altar of classic rock, but have a unique, punk-leaning personality. Between them and Saint Jhn, Sunday got started with a bolt of energy, which was much appreciated on the tail end of the weekend. It wasn’t White Reaper’s first time at Forecastle, but it was nice to see them play the main stage in front of a full crowd. They’re one of Louisville’s best bands, and it was, as expected, one of the best shows of the weekend.—Scott Recker
Khurangbin
Forecastle thrives when it serves as a showcase for upcoming weirdos, and Khurangbin is absolutely that, a funk-and-jazz trio that makes you want to jump into the laziest of rivers and get all the way mild. The band blazed through a number of tracks off of Con Todo El Mundo, which is the summer jam of 2018, not to be slept on. They trotted out a Snoop Dogg/Dr. Dre medley, a hip-hop delight that fucking delivered — busting out “Maria Tambirn” before crushing it into “Rapper’s Delight.” This was the most understated and powerful set of the entire fest, for a multitude of reasons. Khurangbin are straight fire and don’t give a shit about convention, making things on their own terms. And it was righteous.—Syd Bishop

Teddy Abrams & Friends
The final Teddy Abrams-led showcase of the weekend started off with interesting choices. Tom Petty’s “Don’t Come Around Here No More” was welcomed and treated with love. There were, of course, other enthralling turns for this audience, such as Billy Ray Cyrus’ only song “Achy Breaky Heart,” the Ben Sollee-led rendition of “Fields of Gold” by Sting, Carly Johnson’s pick “You Gotta Be” by Des’ree, and 1200’s “This is America” proclamation. This setlist knew no bounds. It is always an experiment when Teddy Abrams & Friends get together, but wordsmith Hannah Drake provided the most-moving performance this time, reciting an intense, untitled poem in which she captivated the attentive audience and even moved herself to tears with inclusive words we needed to hear, as the band churned and improvised the moods behind her. To close the set, Mayor Greg Fischer made his Forecastle debut with a spoken word compilation of quotations taken from Bob Marley to Einstein, Muhammad Ali and more, and the band continued to rise. Fischer, who used to be a music promoter in college, told me this after the show: “In the job I have right now, I use a lot of words, speak a lot. And there have been a lot of inspirational speeches given over the years that formed who I am, so I wanted to put a combination of music and classic speeches together with a specific Louisville message at the end … I wanted to speak towards a progressive city of justice.”—Lara Kinne

Vic Mensa
Mensa came out like a champ, with all the kids throwing their hands up like Wu-Tang was here to command that shit. He split the crowd and walked through, like rap Moses parting the hip-hop seas, ready to get the Sunday crowd to flip out. The crowd shrunk as the pit grew, the rowdiest at the fest that I’ve seen. Mensa led the crowd in a chant of “fuck the police,” which seems timely, no matter where you live. I want to buy this guy a beer. Mensa kept everything intimate and in the moment, finding a balance between focusing on the garbage fires in the world and letting loose. It was a master’s class.—Syd Bishop

Arcade Fire
I wasn’t a fan of Arcade Fire’s latest record Everything Now. Between it being overly woke and leaning too far into an ABBA-like sound, it didn’t register with me, but that didn’t change that they’ve made two of the best rock records of their generation with Funeral and The Suburbs. And sometimes, a band that’s as wide-ranging and layered as they are can have trouble translating that from the studio to the stage, but not Arcade Fire — their headlining Sunday set was big and bold and it made you remember the impact of their best songs. Their two hours on stage was full of energy and they made it known why they’re still one of the biggest bands in the world.—Scott Recker