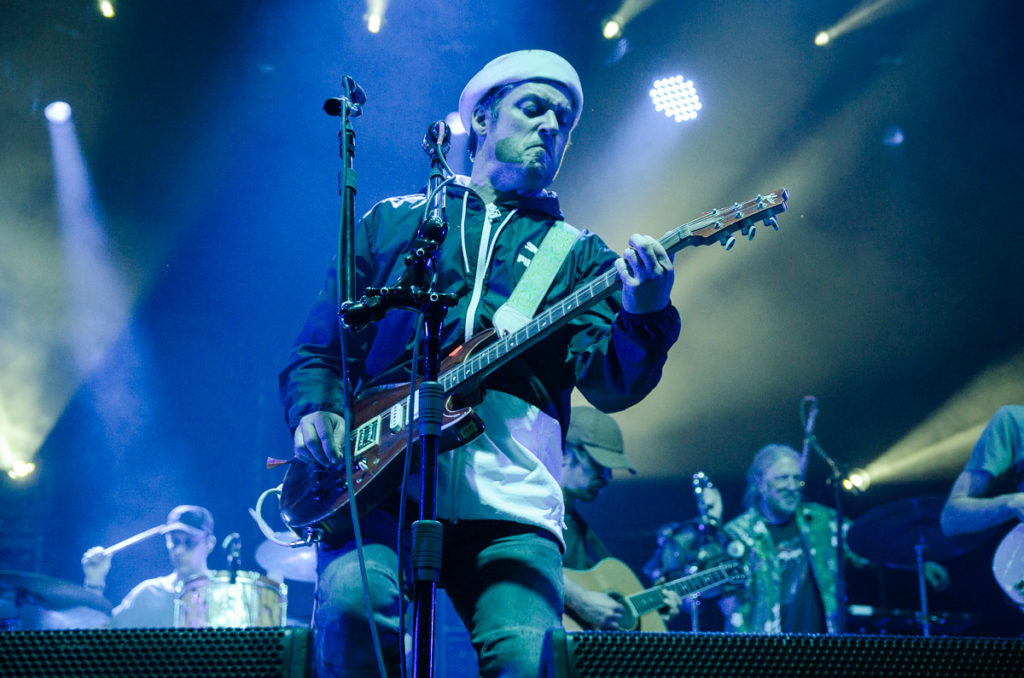 I like every record Lucero has put out, except the last one. The muddled mid-tempo stuff on All A Man Should Do didn’t register for me like the big, punk-leaning, horn-driven alt-country on records like 1372 Overton Park, which is my favorite from them. But, looking back on this Forecastle set during which they played nothing from 1372 Overton Park and quite a few songs from a new, yet-to-be-released album, I was pleasantly surprised. I mean, they’re a tried-and-true live band, and they seem incapable of playing a bad set, but they didn’t stick to the hits. Sure, they played “Texas & Tennessee” and a few other favorites, but it wasn’t a safe set, and the new material had those wild, hook-driven choruses that has made them who they are. I came in wanting to hear my favorites, but left looking forward to an upcoming record, and that’s a solid payoff from a festival set. (Side note: Two people passed out at this 5:30 p.m., one-hour set. It’s going to be even more hot today. Drink a lot of water and don’t underestimate the hell weather by the river.) —Scott Recker

Wax Fang
The Port Stage, which is now hidden in a shaded row of flea market booths, was a pretty great starting point. The bass and drums sounded pretty good at this stage, heavy and driving in the way that gets folks pumping their fist. Of course, that’s equally attributable to the band, who are in a lot of ways Louisville’s answer to Queen, with their driving and anthemic jams. Scott Carney (vocals, guitar) can holler like a mad man. He’s got range and puts it to work. Lacey Guthrie (Twin Limb) came out and slayed it — her sultry vocals drifting in the air above the crowd as a soft breeze and a slick groove served the crowd. So many solos. So many fucking solos. When we reached the ballad portion of the set, a sweet piano melody that you could imagine Elton John rolling out, was the prelude to a rowdy breakdown. The crescendo was matched by the crowd, Carney orchestrating from his place on stage. Glitter was everywhere. Was there a glitter storm or something? I was momentarily happy at the continued success of the glitter industry. Godspeed, you pioneers.—Syd Bishop
The Thrills with Teddy Abrams ft. Carly Johnson
The Thrills is a sextet comprised of Louisville Orchestra conductor Teddy Abrams, vocalist Carly Johnson, alto saxophonist Jacob Duncan, bassist Danny Kiely, Scott Moore on strings, and drummer Paul Culligan. “We play pretty much any type of music we like,” Abrams said prior to the show. “All the members love trying new things and have very diverse musical backgrounds and interests.” The element of surprise is quintessential and a trait that Abrams adds to every Forecastle performance; most of his bandmates have also played with the Forecastle Symphony in previous years. As The Thrills, this bunch was here to impress, and with Johnson singing lead over these masterful musicians, it’s hard not to stop, look and listen. It was a foolproof mix of covers and member original tunes. The Cranberries’s “Dreams” opened the set and introduced guest vocalist J.D. Green alongside Johnson. The recognizable Sam & Dave soul classic, “Hold On I’m Coming,” shifted the mood, carrying over into a funky edition of the jazz standard “Summertime.” Jacob Duncan injected his sense of humor with an original tune titled “Oomamaboomra” and Johnson shared a moment with her song “I Used to Cry.” Abrams is a low-key conductor when he’s slamming the keys and channeling his inner Jimmy Smith, but he stepped it up for his cheekily titled piece, “Jazz.” The Thrills are simply a fun group, jammy at times, and, by the end of their set, Kentucky Landing was packed.—Lara Kinne

Father John Misty
Father John Misty scolded the crowd for hitting a beach ball in the air, saying it was hitting people who didn’t want to be hit. So, he was definitely in full Father John Misty mode, but his set was wide-ranging and energy-filled, spanning through his four full-length records, from the tongue-in-cheek “I’m Writing A Novel” to the more serious new stuff. And, although he has a sometimes turbulent relationship with the crowd, he seemed to be having a good time at Forecastle, dancing around and being generally jolly. His live band is great, and it’s easy to forget that he’s one of the most talented writers of his generation, since sometimes he’s personality overrides everything, but it was easily one of the best sets of the day.—Scott Recker

Kurt Vile & the Violators
Anyone who’s taken time to know Kurt Vile understands that he doesn’t need to say much to make the point, because he usually says it in passing — weaving melodies through introverted narratives that so effortlessly align emotional complexities with straightforward lyricism. The truth in pain, or circling existential questions, when Vile plays and sings… he confronts them all. He is obnoxiously good when it comes to purveying melancholy tunes, so, of course, his Friday evening set with the Violators left an impression. He appeared much different since the last time he played at Forecastle, in 2013, when he wore all white and had no hesitation to command the stage with his vintage Fender Jaguar. This time he wore black, his hair down thick and long like the afternoon humidity that was beginning to subside. It makes sense he’s feeling a different way with the songs of 2015’s b’lieve i’m goin down still in heavy rotation — “Wheelhouse” being the signature opener and that first line: “Sometimes I talk too much, but I’ve gotta get it out.” “Jesus Fever” from his fourth record Smoke Ring for My Halo is another set staple, as well as the daylight inspired “Wakin on a Pretty Day” which he introduced saying. The haunting and infectious “Pretty Pimpin” contrasts with that notion that he doesn’t know, or care, which weekday he is even wakin’ on, and it is beautiful. And “Peeping Tomboy,” also from Smoke Ring, veered from record with a surprise saxophone solo.—Lara Kinne

Modest Mouse
The entirety of Forecastle hung tight for Modest Mouse, who commanded a pretty insane crowd. Leading off with “The World At Large” was a solid move that hooked folks in with a crowd pleaser, bouncing straight into some of their newer stuff which has an almost circus thing going on, like indie carnie music. Or maybe my ears were just broken from being pummeled by the time Friday’s headliner took the stage. There are a lot more pinch harmonics and feedback than I’d imagined when they pulled out “Dramamine,” a deep cut from their ‘90s work. It’s got a little more in common with classic Louisville stuff such as Rodan or Slint than their later music has. It felt familiar in a comforting way, which is saying a lot. I was really digging the vibe, with the twinkling guitars and violin work. Of course, it wouldn’t be a Modest Mouse show if they didn’t mix it up, weaving in banjos, horns and strings for a sinister waltz, before shifting gears into indie bombast. The band used a lot of time between songs to set up, which kind of pulled the mood down. The singer wasn’t much on banter either, or at least not tonight, but when they got going, they fired on all cylinders, maneuvering through a lot of dynamic space. I went in with a memory that these songs were safer than they are and I left happy to be proven wrong.—Syd Bishop