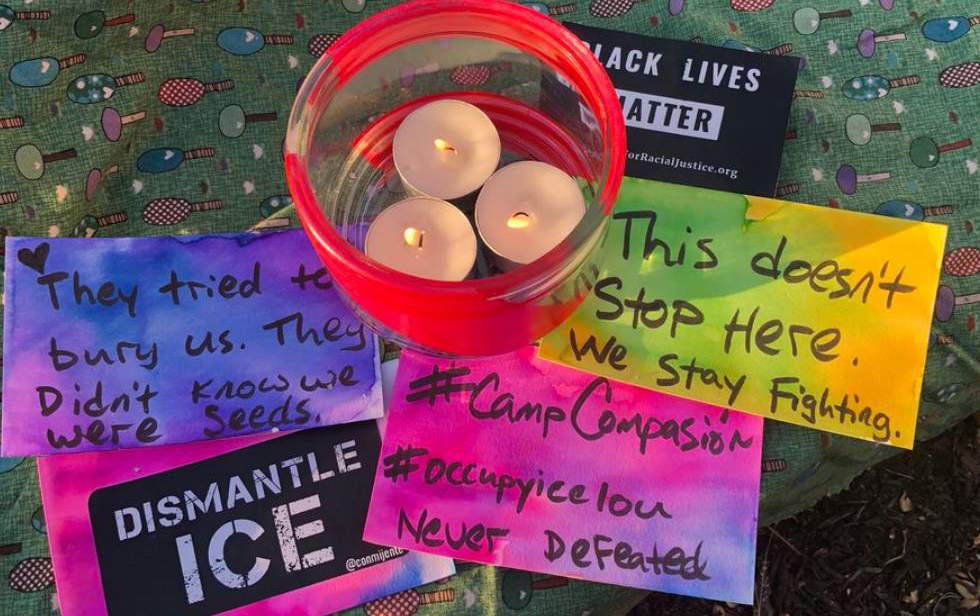 [Update: Police arrested Occupy ICE protesters Thursday who were trying to block entrance to the Louisville Immigration Court inside the Heyburn building on West Broadway, according to the Courier Journal. And they began reassembling an encampment, this time at a park near Sixth and Chestnut streets.]

After nearly two weeks of camping out on the sidewalk across from the Immigration and Customs Enforcement offices on Broadway and Seventh Street, the tents and belongings of Occupy ICE protesters were removed by police last week. The police claimed the protesters had not met rules designed to keep sidewalks clear for disabled people to pass through.

Right… How many sidewalks in, say, West Louisville, are compliant?

Regardless, now that Camp Compasión is gone, what will Occupy ICE do next?

Jesus Ibanez, spokesman for Occupy Louisville/Mijente, told LEO writer Syd Bishop that the protesters will not give up, although he was not specific about the group’s next plans.

“Our goal is the abolition of ICE. It’s not necessarily the occupation. The occupation is just one tactic of many possible tactics,” said Ibanez. “Whether we continue with occupation or change tactics, our goal is going to remain the same. Hopefully, the public will know what we plan to do soon. We want the border patrol reimagined as a humanitarian force.”

Black Lives Matters Louisville was outraged by the force displayed in clearing Camp Compasión. Chanelle Helm, a core organizer of BLM Louisville and an organizer of the encampment, wrote on Facebook that:

“Something about the way Louisville Metro Police Department came into #CampCompasión that really sat with me — all the way to the fucked up massive amount of force they showed up with was: taking barriers and putting them up against the things that we left on the sidewalk… and then refusing to allow us to get them. Which of course we did but like the amount of brain power at LMPD is nil.

If the property was abandoned… anything for a distraction.

Someone said some of the officers cried. I doubt it. Idk how the fuck you go to work and complete the orders of ppl who don’t care about you or your wellbeing, exhaust you and then send you to do a job that really won’t amount to shit.

This goes for them and the Department of Homeland Security officers: your hands are dirty. Whether or not you agree or you actually helped apprehended someone and forced them into a cage: your job keeps you in a theoretical one every day.

Donate to the movement

“As you may know, Occupy ICE Louisville’s #CampCompasión was forcibly removed yesterday by LMPD. One of the ways you can show support as organizers regroup and move forward with next steps is to contribute to any of the platforms below.”

“Please remember moving forward to listen to the directives of core organizers, support and protect Black and Brown folk, and continue to demand that ICE be abolished!”

Chased around town and out of restaurants by protesters, U.S. Sen. Mitch McConnell hid behind the Courier Journal’s op/ed page Sunday to explain why he is not intimidated and how those pesky protesters are just socialists who do not want a “safe and secure America.” Here are excerpts:

“ … By definition, a socialist forcibly denies an individual’s rights, property, and the money in his or her wallet in favor of the group. These ideas have failed every time, and the twentieth century is filled with their results: horrific poverty, countless deaths, and a complete loss of personal freedom. Socialism is an idea the overwhelming majority of Kentuckians find ludicrous … ”

“ … ICE was established after 9/11 to protect our homeland. The law enforcement agency’s brave men and women defend this country and our citizens every single day against criminal aliens, drug cartels, gang members and sex traffickers … ”

“ … So then why is the radical-left howling to tear down this organization?

Their complaints are about more than the separation of families at the border. That’s something the administration has moved to address … ”

“ … If these self-described socialists had their way, we would have no immigration laws and our borders would be meaningless. The result would effectively erase our national boundaries and destroy the principles of law and order. Our state and local law enforcement system would lack the resources to effectively prevent terrorists and criminals from walking into our country to commit heinous crimes against our families. Put simply: without borders, there can be no security … ”

“ … So instead of articulating the practical effects of their radical beliefs, they are attempting to intimidate public officials and to denigrate the integrity of our nation’s law enforcement officers. They stage ridiculous scenes to get media attention and advance their socialist propaganda. But we must remember that the policies they are proposing threaten every neighborhood in America.

Perhaps even more alarming is that what was once a fringe idea has become mainstream in the modern Democratic Party. It’s even found powerful allies among potential candidates for president in 2020. Multiple Democratic members of the U.S. Senate, including Elizabeth Warren and Bernie Sanders, have turned their back on these brave law enforcement officers and called for the end of ICE … ”

“ … As Senate Majority Leader, I will continue to stand against socialists and the extreme-left who yell to ‘Abolish ICE’ … And like you, I will not be intimidated.”

McConnell may not be entirely wrong regarding how the Democratic party is handling the movement to abolish ICE. But LEO founder U.S. Rep. John Yarmuth, like many local Democrats, found himself unable to endorse the protesters’ demands to dismantle the agency. “I don’t think that’s the answer right now,” Yarmuth told them during a press conference, according to the CJ. “You’re going to have an enforcement mechanism anyway. What we need is intensive oversight.”

Yarmuth said he favored protesting at the ballot box and restoring a Democratic majority in the U.S. House of Representatives. “We can yell at anybody we want to, we can make every rational argument, but until we change control of Congress, nothing is going to stop these people,” Yarmuth said. •