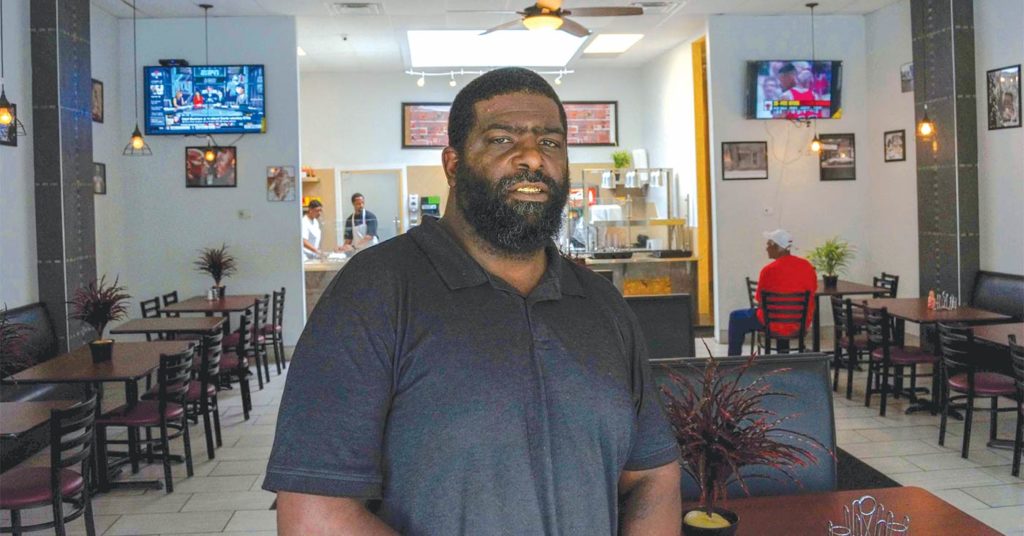 “I got shot in the mouth when I was 22 and it didn’t slow me down. When I was 25, I went to the penitentiary. I sat down there for 5 1/2 years. It was a mental battle, in itself, to correct what I was doing wrong. It took for me to know that I needed to correct it. I needed to correct the people, places and things that was around me and start doing stuff that was foreign and uncommon to me. I’ve been out for almost five years. I just been working, man. I’ve been working everyday. My uncle had this open and they had to shut it down, so they wouldn’t take no loss. That was smart. They made their money back and shut it down. I gotta store behind my barber shop and we got to cooking lil’ burgers and stuff. In two to three weeks, it was lines out the door! My vision was to get that spot and then get this in August. God’s plan was to get that spot, settle down, do what’s right by your wife and I’ll put you in a position to win. That’s just what happened. I opened up the store. I opened this up, the day before Derby. If that ain’t a testimony in itself. Then, I grew up on this street. My mama lives down the street.

With this, I had a whole lot of help. I didn’t have to do nothing but come in here and turn on the switch. That’s all I had to do. I feel like I have some good people that’s backing me, and they ain’t hurting for no money. They’ve been doing this all they life. You know, they’ve been building up houses and selling them. They go to auctions and buy to resell. That’s all they do is go to the market and trade.

I like to dress. I was buying clothes and stuff and then I was watching one of my guys. He’s my uncle’s friend and I’ve been around him for three years and it just hit me. The whole time I’ve been around him, he wore the same thing. He don’t spend his money on unnecessary stuff. He wears Wranglers, a plaid shirt and some Red Wing boots. He works every day. I realized that you don’t have to be fly to work. You’ll mess it up. So, I went to Sam’s and got me a $9 shirt. I went to Wal-Mart and got me a pair of $13 Wranglers. I wear it, take it home, wash it and put it back on. All of my buddies will come in and see me in a collared shirt. It’s foreign to them to see me telling people to enjoy and have a nice day.

The whole character done changed. I’m telling them that they need to get a job, and if they don’t get a job, they’ll go to jail. You don’t want to go back. If you get caught now, you won’t get out until you’re 50, and you don’t want to do that. You already gave them half of your life. Man, it’s time to build. My focus is just building with my wife. Right now, I’m going through erasing pictures from my Instagram. I have to sit down and erase about 20 to 40 pictures at a time. I have to erase all of that before this gets too big. I want to tell people about my background, not show them pictures. A picture speaks 1,000 words, and if I’m telling you, I’m only going to speak a couple hundred. I want to tell you.

My kids inspire me. I don’t want to lead them down the same road I was lead down. They are my daily inspiration. When I wake up and come to work, it’s to provide for my children. My family, that’s all I got. My kids and my wife are my fuel. Once my kids are old enough to take over, I’ll be able to take a break. My goal is just to keep my kids on a straight path and build a legacy.

When I was younger, I would sit out there, in these streets and play around. I involved myself in gang activity. Been there and done that but look at me, now! Yeah, I was in a gang. Yeah, I committed some crimes. The correctional facilities that I was incarcerated in, corrected me. Now, that I’m corrected, I come back to society but as a taxpayer and a business owner. Yeah, I’m still a black man with a mouth full of golds but don’t judge a book by its cover. There’s a lifetime full of knowledge up here.

The West End is about to revert back to what it once was. It used to be predominantly white. Now, as you can see, they’re tearing down Beecher and all of the projects, and sending people out south. They’re building new out here; that’ll bring them back down. They’ll give you your Section 8, and you’re out of The West End. It’s set up for you to run out of The West End because The West End is the most valuable property — it’s historic.

You have to get the black owners to come together. If you don’t notice, the Asians and Caucasians got a liquor store and a Dollar General on every corner. All these places for black people to spend their money. You don’t even have a skating rink and movie theater.

Stay humble and stay grounded. If you step on one pebble, it’ll knock you off balance. You’ll be back where you came from. The moral of the story is to stay humble out here, because at any given day, your number can be called. You’ve got to stay focused, humbled and grounded. As long as you’re focused, you have a vision. As long as you’re humble, people won’t mess with you. As long as you’re grounded, all three will combine and work. It works if you work it.” •