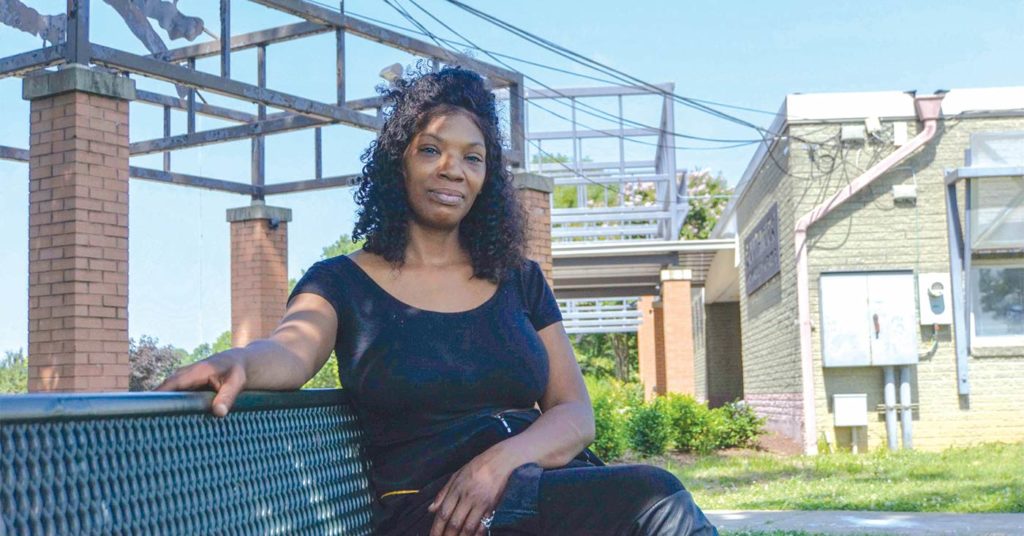 June 25, 2018
Katina, Park DuValle
“I was born and raised in The West End, off 36th and Market. My experience in the West was good. I got eight brothers and sisters. My father’s a hard worker. My mom died when I was 15. She had breast cancer. My father was a parks worker. He would cut the grass and stuff. He would be at all of the parks throughout the city. He did the damn thing, and I’m proud of him. He just had a stroke a few days ago. We’re so used to him being the backbone, and, with that, everything is breaking down. I really feel bad.

Some people just asked me if I regret writing the book. I don’t regret it, but I regret what my father’s going through, because his heart hurts for me. I never wanted that for my father. People asked me why I did it, and I honestly did it to make it better for my family. I was the provider. I told God that if I write this book, I would oblige what he’s asking me to do, and that was to stop escorting. I was the kingpin of escorting. I was putting everybody on top. Was I eating off of them? No, I was breaded. I just wanted to make people’s lives better, but I feel like I made it worse.

It’s been rough. Everybody in the family can’t be around the kids. I can’t be around my grandkids. I can’t even talk to them. It’s not fair. My intentions were never to hurt anyone. It was never personal between me and Rick. I don’t know Rick, but what I said to Rick was that we’re the same people. The only difference is that he’s got a lot more money, and we come from two different sides of the track. Our spoons are still silver. His may be a $1-million spoon, and mine might come from Wal-Mart.

God told me that I’m going to go through 40 days and 40 nights, but I have to trust in him. Let him guide me. He’s going to create a path for me. I need to believe in him, not other people. He’ll guide me, and it’ll be OK. See, things don’t always come in money. For me, I lost my whole family and all of my friends. I lost everything because everyone thought that I was going to come into millions, and I didn’t. I can still hold my head up, though. I had lawyers tell me that I did what nobody else has done. I just had to hold my head up and keep pushing.

I’m a hustler to my heart because that’s where I came from. That’s just what it is. Do I hurt people? No, I try to humble myself. If I got it, I give it to people. I still get smacked every now and then. It’s just another Band-Aid that God’s got for me. Keep it pushing, and it’ll heal.

Stand in your truth and stay true to your heart. Strive for whatever it is that you want and push forward. There’s so many roadblocks and obstacles, but that’s just what they are. We will get through them and get over them. If there was never any obstacles in life, there will be nothing to get over. You have to go through obstacles in life. It’ll be OK. Stand in your truth. If it’s true, you stand by it 100 percent. That’s what my father would tell me.”

I’ve been dealing with it in the wrong ways. I act on shit and then about shit later. That’s what’s been getting me in trouble. I don’t know how to deal with grief, and I keep so much anger built up. The smallest thing will trigger it.

My kids keep me motivated. I gotta get back to what I was doing at first. I still got kids to take care of, and this ain’t doing nothing but hurting them. I just want me and my kids to be straight. That’s all I worry about. I ain’t the type of person that goes to clubs or anything. I’m just all about my kids.

I do want to go back to school. I wanted to work my way up at the hospital, but I ain’t gonna let this stop me. I’m gonna get back in it. I want to do anything in the hospital field. I just want to do something different.

Love your kids. Be there. There’s a lot of parents that are absent. You just never know when it’s going to be your child’s last. At least I can say that I was there for my son. But something happens to them and you never get the chance to say you love them or say bye or anything like that.” •