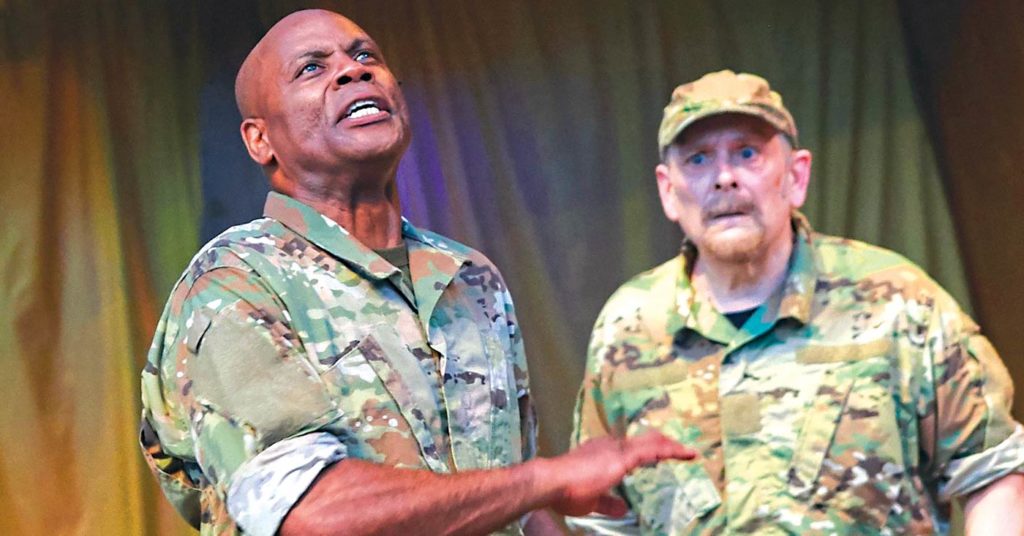 The finale of Kentucky Shakespeare’s “Othello” is the most emotionally shattering piece of theater the company has produced during Matt Wallace’s tenure as producing artistic director — or in the company’s history, in my judgment (and I’ve been attending since the days of C. Douglas Ramey).

You can credit part of its power to stagecraft. Infrastructure improvements over the last few years have made it possible for audiences to experience the hushed, intimate horrors that open this segment in ways that would have been impossible a few years ago. As Othello creeps into the bedchamber of his wife Desdemona, Casey Clark’s superb stage lighting (and the interrogatory glare of a flashlight that probes the audience) creates a foreboding atmosphere that is enhanced by Laura Ellis’ sound design.

You can credit Shakespeare, of course.

Many critics view “Othello” as the most fully realized of all Shakespeare’s tragedies. Othello’s tragic flaw, after all, is not greed or personal ambition. He is a man of passions and enthusiasms, and it is love that brings him down when Iago, a trusted subordinate, plots to twist that love into jealousy with a diabolical scheme. It’s a plot that the audience has witnessed throughout — which heightens the effect as it is slowly revealed and shocks the consciences of all those on stage.

But most importantly, you can credit the stunning performances that Wallace (who directs this production) has elicited from his entire cast.

Here’s a quick summary of the scenario. As the story begins, Othello (Dathan Hooper) has eloped with Desdemona (Hallie Dizdarevic) to the fury of her father Brabantio (J. Barrett Cooper) a powerful Senator in Venice. Othello, an admired general in the Venetian army, has recently promoted one of his subordinates, Cassio (Jon Patrick O’Brien) as his captain — over the head of the now disgruntled Iago (Jon Huffman).

The resentful Iago sets about to bring down Othello and Cassio via a complicated set of deceptions and alliances. He is obsequious, flattering and manipulative with his superiors and cunning enough to ensure that no one understands the interlocking nature of his enterprise. His unwitting partners include Roderigo (Gregory Maupin), who is smitten with Desdemona, as well as his own wife, Emilia (Jennifer Pennington), who is Desdemona’s servant and confidant.

When the Turks set out to invade Cyprus, the Duke of Venice (Abigail Bailey Maupin) orders Othello and his troops to the island, where Othello will replace the current administrator, Montano (Shaleen Cholera). Othello insists on taking his new bride along.

The production is set in contemporary Venice and Cyprus, a device that works well — and inspires Costume Designer Donna Lawrence-Downs to create not only striking outfits for Desdemona, but slightly creepy tourist garb for Roderigo; striking attire for the Duke and other officials and fatigues for Othello and his troops.

Because the Turkish fleet has been lost to a storm, there is no battle — and the newlywed Othello announces a celebration.

It’s a glorious moment for Othello, and Dathan Hooper plays the jubilant warrior with muscular verve. His physique and carriage are bursting with pride, good humor and love for his bride. And Disdarevic’s Desdemona is every bit his equal — an assured, confident, beautiful woman, generous in spirit and sure of her husband’s love.

In camp, the drunken revels of the troops (Crystian Wiltshire, Matthew Bone, Brian Smith, Tony Milder) offer innocent merriment until Iago baits Cassio into drinking — an episode that highlights O’Brien’s comedic abilities until Iago gins up a brawl that involves Rodrigo, Montano and leads Othello to disgrace Cassio by stripping him of his rank. Fred Johnson and Matthew Bone are credited as “military advisors,” and the camp scenes have the ring of authenticity.

This is the lynchpin of Iago’s plan. When Desdemona tries to intercede on Cassio’s behalf, Iago hints that her motives may not be pure. He exploits his wife Emilia’s proximity to Desdemona to gather evidence. And that fact that Cassio is a womanizer — his current fling is with Bianca, portrayed with electrifying energy and wit by Ernaisja Curry — helps reinforce the deception.

Shakespeare wrote two tragedies about Venetians, “The Merchant of Venice” and this one, which is properly called “The Tragedy of Othello, the Moor of Venice.”

Both have central characters whose identities — the one a Jew, the other a Moor — are freighted a mass of issues that vex critics and scholars. It’s evidence of Shakespeare’s genius that all of his works resonate with us across generations. And because of that, it’s a well-known temptation for directors and actors to use the plays to comment on contemporary issues. For instance, last year’s production of “Julius Caesar” at New York City’s Central Park featured a Trump-like Caesar whose wife spoke with a Slavic accent.

There is an argument that all choices are ideological, including the choice to focus on the words themselves and unleash the characters to speak for themselves.

That seems to be a core philosophy at Kentucky Shakespeare — and it serves “Othello” well, by revealing the flawed humanity of the central characters. Shakespeare’s language, including the racist tropes, is intact. But Huffman’s performance is finely calibrated to express Iago’s fuming jealousy and Gregory Maupin taps into the feckless selfishness that drives Roderigo.

As Iago’s scheme comes to light, each revelation is a shock — and the on-stage ensemble is brilliant here, especially Neill Robertson, seen here in what for him is the rare guise of a businesslike bureaucrat reacting to the actions of others.

But none of the revelations is more horrifying than Emilia’s discovery that her husband has made her the unwitting agent of Desdemona’s destruction. And when that happens, Jennifer Pennington’s no-holds-barred portrayal of grief and fury is something to behold. •