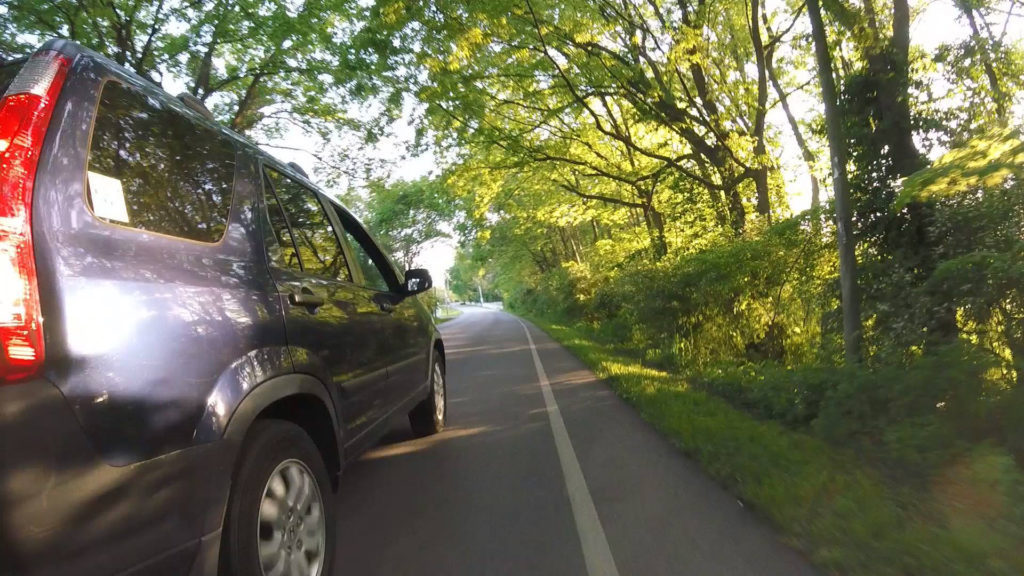 An example of a vehicle passing too close to a cyclist. Photo by Carlos Fish

Over this past winter, I traveled to Frankfort and wore my cycling windbreaker to show my support at a state Senate Transportation Committee hearing on House Bill 33. The bill, which became law and took effect July 14, requires motorists to give cyclists at least three feet when passing on two lane roads or change lanes when safe to do so on four lane roads.

I was motivated by my many personal experiences with how I’ve been passed by motorists a multitude of times. I can describe them as: The Good, The Bad and The Ugly. In addition to people throwing objects such as firecrackers, beer bottles and McDonald’s garbage with ketchup, I recall numerous occasions when I was passed so closely I feel lucky to be here writing this story. There have been many occasions when I was passed, within what seemed to be inches of my life, as I felt the unnerving wind of a speeding vehicle.

In 2016, on Highway 42 in Oldham County, Channing Bowling was riding her triathlon bike while training for the Louisvlle Ironman competition when she was struck by a motorist’s mirror on her backside. The mirror fell off, shattered and tumbled to the ground, as the driver kept going and never stopped. “I just couldn’t believe he or she didn’t stop! I was flabbergasted. I mean, who does that?” recalled Bowling, a mother of two. The driver of the white Mercedes SUV was never located.

Incidents like these are why this safe passing law was written.

Dixie Moore, a bicyclist, advocate for bicycle safety and a retired clinical psychologist in Lexington, helped push through HB 33. Once on a bike ride in the Lexington area, she noticed a bumper sticker on a car that said “Give Me 3’ It’s The Law.” She investigated and found that was not the law in Kentucky.

She was inspired: “If we can do it in 34 other states, then why not here?”

I met Moore at one of the committee hearings in February, where she sat alongside state Sen. Jerry Miller, R-Eastwood, sponsor of HB 33 and Troy Hearn, bicycle and pedestrian program coordinator at Kentucky Transportation Cabinet.

Hearn told me the law would be enforced just as would any traffic law.

“When and if a police officer sees an infraction happening, then they will act upon it,” he said. “What the reports and the studies show is: They can prove that it makes it safer for cyclists, but they can prove that it makes motorists more aware and educated about how to operate in the same space. It does add another layer of legal protection for the cyclist after the fact.”

How will the new law be supported and promoted by state government? Driver’s manuals and other driver education materials such as traffic school literature will be updated. The Legislative Research Commission will also publish updates, and the Kentucky Bicycle and Bikeways Commission brochures will be produced to lift awareness. Bicycle organizations, such as the Louisville Bicycle Club, will continue rider education efforts. Counties and municipalities can apply for Paula Nye Educational grants for area public service announcements, such as billboards and radio spots.

“It’s going to take a generation,” Moore predicted. “As new motorists come into driver education, it will be part of the way they learn to drive with giving three feet or more when passing a cyclist. It’s going to take time to get it into everyone’s consciousness.”

What about the opposition?

Said Moore, “There are some people who don’t believe that cyclist should be on the roads at all. Their belief is with people using the roads to get to work etc., the recreational cyclist is in the way and shouldn’t be there in the first place.”

State law states that cyclists have a right to use all roads, other than interstates, providing they follow the same traffic laws and operate as does any other vehicle.

I asked state Sen. Paul Hornback, R-Shelbyville, about his concerns with the bill and whether the new law was a hardship on motorists: “I don’t think it’s a hardship for motorists, and I wasn’t against it as much as questioning it. My biggest concern was it would be giving cyclists a false sense of security.” Hornback ended up voting in favor. He bicycles often in the area he farms as a means of transportation when dropping off farm equipment, and he has a bike rack on his combine. He now agrees the new law has an educational benefit and that we need to continue to add designated bike lanes and paths in urban areas, including in Shelbyville, where he lives.

As the word gets out on the law, we’ll begin understand its effect.

Will motorists be more considerate about passing cyclists?

Will new cyclists who ride in groups learn to let motorists pass safely?

Time will tell, but, in the meantime, more cyclists are getting savvy with front and rear video cameras that capture incidents, including road rage and unsafe or illegal passing. These videos and pictures allow law enforcement the evidence they need to give warnings or cite offenders.

With this law, I see progress for road sharing, in a state that always seems to be last in everything.

My hope is we will all learn how to share the road a little better, and our beautiful Kentucky roads become safer for everyone.

Here’s to three feet or more! •