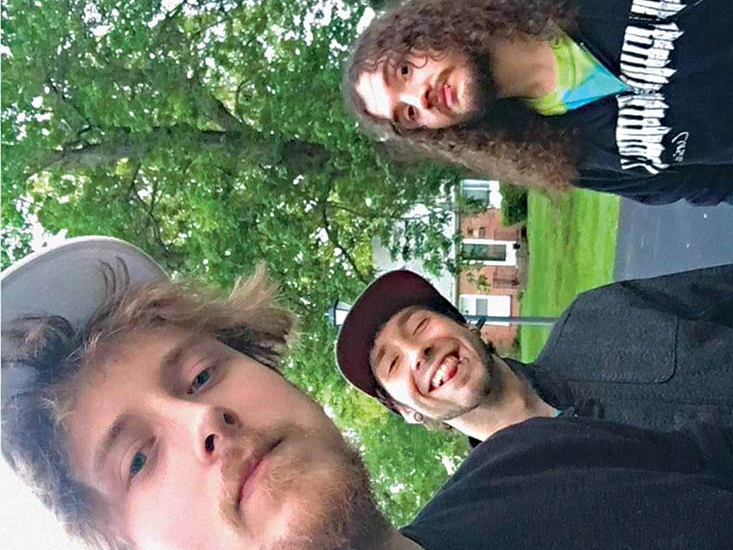 From its title, the song “Red Hot Silly Peppers” may seem light in tone, but the song is much deeper than what you might expect.

“Whenever I write songs I kind of sit on them and let them replay over in my head,” Mosquito’s chief lyricist and drummer Brian Burchette explained. “I found it was basically about anxiety. Not knowing how to approach people in a sense I guess. So, like, if anyone feels weird about new friends or new people that they should just take the shot because you never know, really, what would happen if you didn’t do that.”

Musically, “Red Hot Silly Peppers” is an excellent reflection of Burchette’s sentiment. It enters with anxious drums before delving into an indie punk jangle with a soaring chorus that was bathed in alt-rock waters from 1993. Burchette gently yelps until the song crescendos into a frenetically-charged breakdown ending. It is perhaps the mirror to Burchette’s feelings — all the amalgamated facets of a person and their idiosyncrasies in one cohesive song.

“I definitely struggle with anxiety,” Burchette said. “And I don’t want to speak for everyone in the band, but when I write songs I like to make sure that they fit around us three [band members]. For me personally, it’s just searching for a topic to talk about. So, once I can find that, everything can just roll off the tongue. For this band, our thing is to just get stuff off our chest. Whatever is going on, whether it’s depression or anxiety or anger or happiness or joy, anything. That’s the primary reason this band even happened.”

For such a “straightforward song,” Mosquito has found one challenge in particular: performing it live.

“It’s interesting, more than anything, how the song grew into what it is,” Burchette said said. “We record with the same guy every time [Zack Stefanski] and he heard a synth with it. We don’t have a synth player but he had one at his house — in his recording space — so we asked him to do it. He did some on-the-spot playing and laid the synth down and it came out perfect. For my own personal ears, I think everything needs a synth. But not being able to have it onstage, we have try and fill it out somehow. For instance, I like to sing when we record, but I like to yell a lot onstage, to try and get the passion through and the aggression out.”

Perhaps the most interesting fact about “Red Hot Silly Peppers” is in its initial creation. When asked how the band came up with the musical foundation for the song, Zach Nelson, Mosquito’s resident guitar player, revealed one of the most unorthodox approaches to songwriting this side of Frank Zappa.

“The way we usually approach it is: I use a lot of open tunings, so I’ll pick one at random and ask one of the other guys where I should put a capo and we just do that,” Nelson said. “So I picked a tuning we don’t use much and asked Brian where to put the capo and he said eight. Then I just started messing from there.”

‘Red Hot Silly Peppers’ is  from the EP, Our Mommies Dropped Us Off (2018)