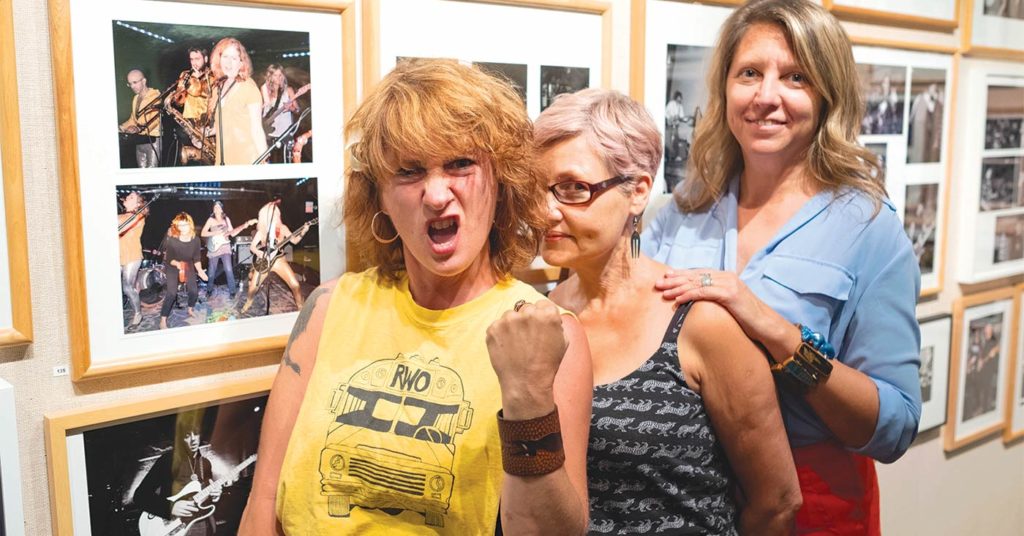 Mary Feiock, Tari O'Bannon and Heather Fox are members of the band Juanita that has been together for the past 25 years.

“Live From a Dark Room: Louisville Underground Music in Photographs, 1980-present” features work by 20 photographers who have captured Louisville’s vibrant underground music scene over the course of nearly the past four decades.

The nearly 300 photographs that cover the walls of the exhibit are part of the LUMA Project (Louisville Underground Music Archive).

One of the curators of the exhibit, Elizabeth Reilly, and her colleagues started the LUMA project in 2013. While concert fliers, posters and other artifacts from Louisville’s underground music scene were being donated to the project, Reilly and her colleagues weren’t seeing as many photographs as they had expected.

“That was sort of why we put the show together,” Reilly said during the opening night of the exhibit last week at the UofL Photographic Archives. “Because I knew there were photographers out there that had these images, and I wanted to showcase them.”

One of the musicians featured, Scott Mertz of Cornbread Mafia and Proles, reminisced: “I’ve seen some amazing bands and met a bunch of amazing people. And all these people on the wall are really kind of idols of mine.”

Mertz also noted how seeing the photographs together reveals the strong sense of community within the Louisville underground music scene.

“It’s a really extended community where if you’re in that community, you can pretty much go anywhere in the city. You’ll see other people that are in the community as well, maybe you don’t know them or you’ve never spoken to them, but you still have that camaraderie of people who can share the struggle of trying to be an artist. At least we get to struggle with something we love.”