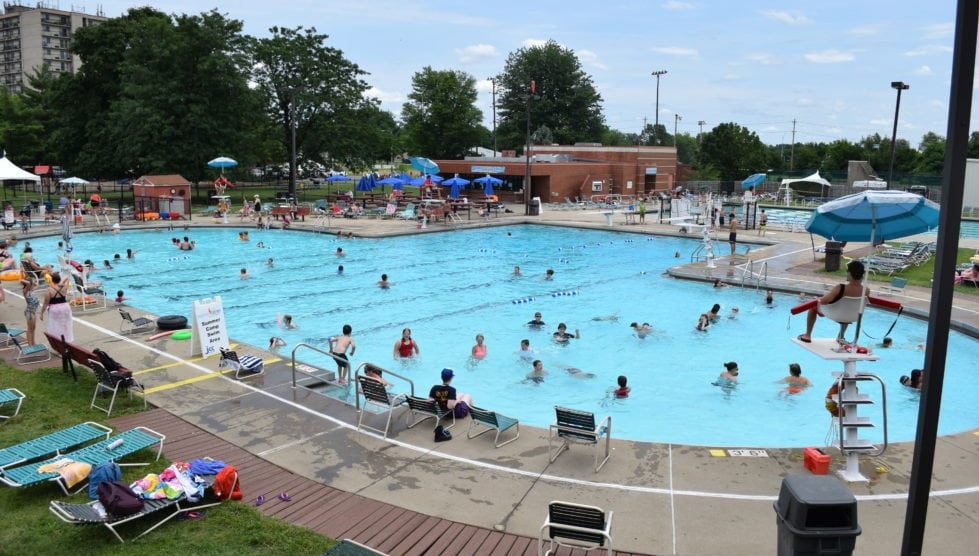 American Turners-Louisville
3125 River Road
Cost: Membership
You may know the American Turners as a place to learn gymnastics, play various sports and see circus performances, but the club also has a pretty sweet pool. Its swimming pool features two diving boards and six swimming lanes without floating barriers. The club offers Summer Pool Memberships with prices ranging from $180 a year for a single adult, to $300 for a family of two adults and children under the age of 18. Or, if you just want to visit, keep an eye out for the occasional Coat Check Pool Party at Turners, which is a chance to enjoy a pool party with the sounds of a live DJ.

Falling Rock Park
9272, 2201 Fendley Mill Road, LaGrange
Cost: $15 per person
Tired of swimming in pools? Looking for a little aquatic variety? Make a trip out to Falling Rock Park in LaGrange, Kentucky. While this may seem a bit out of the way, you won’t be disappointed when you arrive. Falling Rock Park is home to a massive rock quarry that has been left to fill with water, resulting in a man-made lake surrounded by cliffs (that you can jump off of in certain areas). Since this is not your average pool or lake, it also comes with unusual rules. Because there is no shallow end and the water is several feet deep, everyone is required to have a float, noodle or raft while in the water. Paddleboards and kayaks are welcome, but pets, fishing poles, alcohol and drugs are not.

Home of the Innocents
1100 E. Market St.
Cost: $7 per person
A nonprofit aimed at helping kids in crisis might be the last place you expect to find a public pool, but this is no ordinary pool. The Home of the Innocents pool is part of its larger Aquatic Therapy Center. So if you’re looking for a relaxed place to swim where you don’t have to worry about rambunctious kids, this pool is for you. Since the pool was built with therapy in mind, it’s no shock that it is fully accessible for those with special considerations. There is also a splash pad for small children, aquatic exercise equipment including stationary bikes, treadmills and an elliptical machine, and a heated saltwater pool. There are many options for using the pool, including a general price of admission for one-day use, punch cards for repeat users or a monthly membership.

Jewish Community Center of Louisville
3600 Dutchmans Lane
Cost: Membership
The Jewish Community Center doesn’t have just one pool for summertime swimming — it has three. The largest pool offers two shallow areas for families to enjoy, with a deeper area in the center. There are also two diving boards and six swimming lanes with no floating barriers in the largest pool. The second largest pool is a lap pool with nine swimming lanes with floating barriers, and there is also a kiddie pool. So, it’s fair to say there is something for everyone. The only catch is that you have to be a member, which costs between $260 for individuals and $370 for families for a summer membership.

Louisville Metro’s Mary T. Meagher Aquatic Center
201 Reservoir Road
Cost: $6
The Mary T. Meagher Aquatic Center is Louisville Metro’s largest public pool, and it’s indoors so you can swim there year-round. The massive lap pool has 11 swimming lanes, all with floating barriers and dive boards, and it is fully accessible for those with special considerations. Pool hours for lap swimming and recreational swimming differ, so be sure to check Louisville Metro’s website for more details. And if you plan on being a regular, you can skip the daily admission with a monthly or annual membership.

Metro Pools, Sprayground and Spraypads
Various locations
Cost: $3
Speaking of Louisville Metro’s public pools, there are four outdoor pools located in city parks, including Algonquin Park, Sun Valley Park, Nelson Hornbeck Park and Camp Taylor Memorial Park. Admission for all of these pools is $3 for adults, and $2 for children, or, you could get Louisville Metro’s Summer Seasonal Pool Pass which ranges from $40 for an individual to $70 for a family of three. Louisville Metro also offers 15 modern spraygrounds (defined by Metro as interactive and/or complex spraygrounds with electronic timing) in various city parks. And 16 traditional spraypads (defined by Metro as converted wading pools) in parks around town. Click the link above to see the closest sprayground near you.

Ralph R. Wright Natatorium
2216 S. Floyd St.
Cost: Membership
If you tend to take your lap times more serious than most, you’ll probably fit right in at the Ralph R. Wright Natatorium. UofL’s venue for competitive swimming and diving features an eight-lane, 50-meter pool, with movable bulkheads for 25-meter or 25-yard competition. And the deep end features two one-meter boards, two three-meter boards and a tower with diving platforms at five-, 7.5 and 10 meters. To swim at the Natatorium, you must be a member, which ranges from $15 for a monthly, individual membership to $500 for an annual, family membership.

Southside Quarry
4220 S. Park Road
Cost: Donations
Similar to Falling Rock Park, Southside Quarry is a rock quarry that was allowed to become a lake, but Southside is much larger. Being a former quarry, the lake is surrounded by many small cliff-faces, with a few beach spots that drop off into the water dramatically. According to the quarry’s Facebook page, you are asked to make a donation upon entering and the only requirements are that you be 21 or older when entering, have you your ID and be ready to sign a waiver. But seeing as this is very deep water, we here at LEO recommend you bring some kind of flotation device.

Clarksville Cove Family Aquatic Center
800 S. Clark Boulevard, Clarksville
Cost: $7
For those of you living in Hoosier-ville, you’d be hard-pressed to find a better pool than the following two venues. Clarksville Cove features a large wading pool, a lap pool with six swimming lanes, three splash pads and two large water slides and, best of all, it’s all heated. Daily admission prices are the same for everyone, but season pass prices vary if you are not a resident of Clarksville.