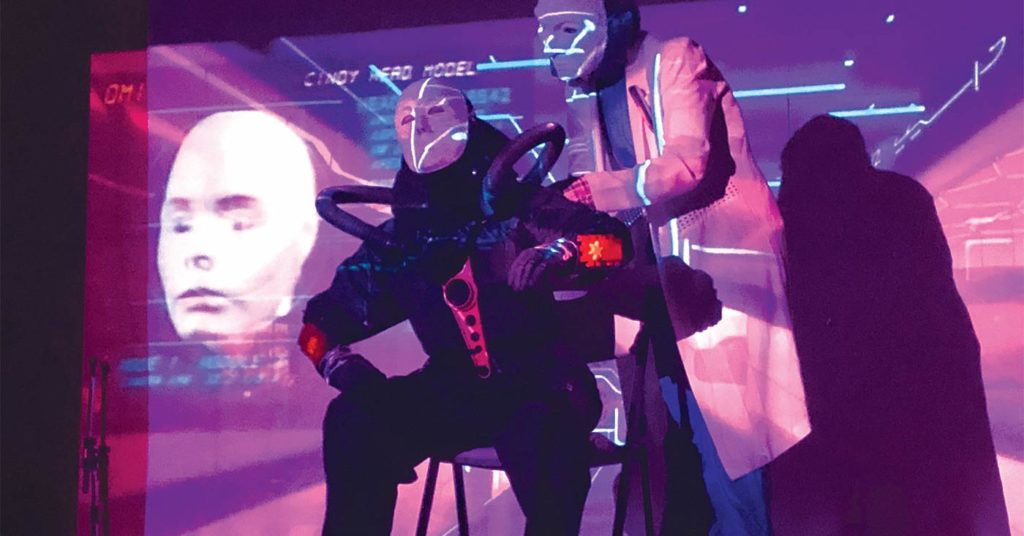 The medium, as Marshall McLuhan famously put it, is the message. The Louisville Fringe Festival, which opened last weekend and continues through Saturday, is a prime example. From the beginning, the organizers (who, doubtless, will guffaw at the use of that particular word) set out to create an event worthy of the moniker “Fringe.”

During the call for submissions, the Fringers oft-repeated motto was, “It won’t be perfect.” They didn’t ask submitters to think outside the Platonic metaphorical box that tedious pedants and managers stand atop while pretending to love creativity. They just posited a boxless world and invited people to move in.

My advice is to embrace that idea and just leap into the schedule without overthinking it. It’s a creative maelstrom, and the guiding principle is discovery rather than predictability. The lineup includes all manner of productions, and, let’s face it, after the event, you can have as much fun dissecting things you didn’t like as touting the things you did.

Venues were a moving target during the planning. One intended venue (The Cure) closed. Another (Monnik Beer Co.) cut back its participation to a single weekend. So this weekend’s events occur at two locations, Kaiju and Four Pegs. Both are perfectly-suited to these events, both in terms of their spaces, their geography and their social ethos. And if you’re afoot, you can get from one to the other in about 12 minutes (if you don’t stumble or dawdle).

This week’s events run Wednesday through Saturday. There are multiple time slots that basically span the hours from 6 p.m. to 1 a.m. If you’re reading this on Wednesday, head over to Four Pegs for the reading of a new play by LEO contributor Eli Keel (7 to 9 p.m., and pay what you can).

I’ve seen a couple of productions, and I’ll describe them below. But first, let me highlight some enticing possibilities.

Been there, done that? I don’t think so.

On Saturday night at Four Pegs (from 6 to 8 p.m.) there is a free “Parallel Play” event. To be clear, in this context the wordplay means “the act of playing,” rather than a work of theater. Participants will gather in what is described as a “Neuroqueer unsocial artspace where expression is encouraged and conversation is prohibited.”

This strikes me as a profoundly-good and adventurous idea. Here’s a more detailed invitation:

“Do you hate traditional parties? Do you crave arts experiences, but loathe the social hoops you have to jump through in typical community spaces? Do you wish you could explore (and maybe even participate in) the arts scene, but without the expectation and awkwardness of direct interaction? If so, this art/playspace may be for you. Art supplies, musical instruments and reading materials will be available.”

Here are brief comments on a couple of things I saw last weekend.

“Robothello,” which runs at Four Pegs (Saturday, 10 p.m.), comes from the Baby Horse Theatre Group. Written and directed by Jon Becraft, it is, as the name suggests, a sci-fi riff on the tale of “Othello.” (Coincidentally, Shakespeare’s “Othello” runs this weekend in an outstanding Kentucky Shakespeare production at Central Park).

The Baby Horse version transforms the Moor of Venice to a robot (called M-0-R) on the planet Venus. This Robothello (played by Katherine Martin) is fully empowered by its human creators to serve one mission: enforcing peace among the humans. Peace, it turns out, is not always profitable for some humans. And when Robothello undergoes a bit of rewiring (because he wants to learn about and share the human experience), things go awry.

“Robothello’ is a fast-moving, lo-fi multimedia production that looks and feels a fusion of ‘80s sci-fi movies (think “TRON”), and what I would cautiously describe (because I can’t claim to really understand it) as live-action anime. The actors, in masks and fascinating costumes (designed by Amy Davis) work in front of spacy, projected landscapes and abstract grids. The action is tightly synchronized with prerecorded voice-over dialogue.

A couple of years ago, I wrote about playwright Zoë Peterson when her witty, short play, “The Devil in Little Debbie,” caught my attention at the Walden Theatre/Blue Apple Players Young Playwright’s Festival. That play was picked up by ATL’s New Voices Festival. And Peterson has continued to do memorable work as both an actor and a playwright.

I saw the first staging of her full-length play, “A Shot in the Dark” last weekend at Four Pegs, where it returns this Saturday during the 7 p.m. slot. This play was part of the new play development process sponsored by the Derby City Playwrights, a collective that has a history of yielding excellent work. There are a few DCP plays on the Fringe Bill — and I’d suggest seeing as many as you can.

In form, “A Shot in the Dark” is a conventional drama about young people in the aftermath of a tragedy. But in this case, the “conventionality” of the production shines a light on Peterson’s command of the craft. As a writer, her voice is witty and earnest. Her script deftly captures the sound, spirit and ironic tone of her adolescent characters. But their incidental ironies never derail the play’s serious intent.

This is the story of three young people, Cassidy (Gracie Taylor), her brother Michael (Alex Haydon) and their mutual friend Jake (Connor Madison). In the aftermath of Michael’s death, Cassidy and Jake are grappling with grief — and untold secrets that are gradually revealed in via a masterful assortment of time-shifting narratives.

From the opening moments Director Keith McGill infuses the production with a sense of urgency and suspense. This is a workshop production, with minimalist production values — but it is a complete and rich theatrical experience filled with ideas and emotions — and an amazing piece of acting from Taylor, whose portrayal of sibling anger, confusion and grief is powerful and affecting.