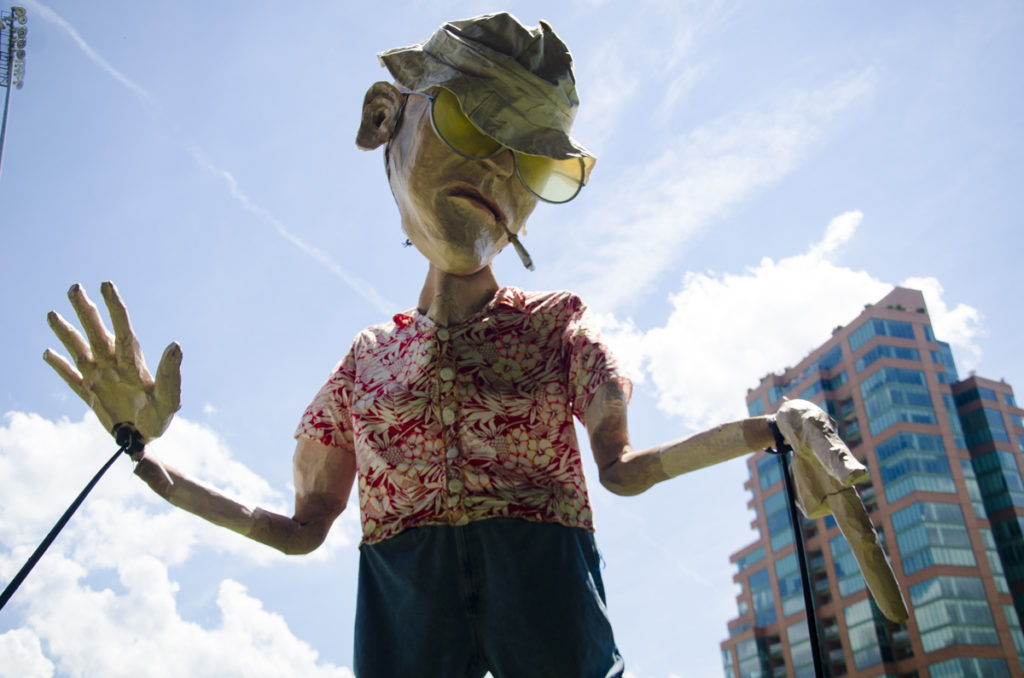 Despite that it’s hot as hell every year at Forecastle, the Squallis Puppeteers are there, winding through the crowd. These are no ordinary puppets, though — they are enormous figures from local pop culture and beyond.

“I keep joking that every year, the puppets are going to get lighter and lighter, and I’m going to be carrying balloons and feathers in 10 years,” said puppeteer Shawn Hennessey, who has participated in the festival from the beginning. “I made Hunter S. Thompson shorter and lighter and Colonel Sanders lighter, and all their shirts are about the weight of a bed sheet. The worst part is the hands; they get saturated in sweat.”

In addition to Sanders and Thompson, the Squallis Puppeteers have made mascots based on the Against the Grain brand, and a host of the oddities that form a colorful representation of Kentucky. At Forecastle to greet the glittered-up folks getting sunbaked, the Squallis puppets sometimes go beyond just having to deal with the heat — sometimes they have to dodge the crowd, as well.

“I’ve gotten hit in the face twice today, and only once was by accident. It is normal for this kind of crowd,” said Hennessey. “This year there seems to be way more young kids. Kids just do way crazier drugs now, so people are kind of aggressive. But it’s normal and it’s usually fine. People’s response to the puppets are usually really positive.”

Not only are they concerned with the logistics of their designs, such as how each person will travel with their puppet while staying safe and as cool as possible, but also the why of each puppet’s personality. For example, Papa John Schnatter recently claimed Sanders had used the n-word. Sanders’ family and others who worked with him deny that the Kentucky Fried Chicken founder had ever said such a thing and insisted he was not a racist, according to the Courier Journal.

“We were on the fence about making him the whole time,” Hennessey said. “Yum! Brands asked us to make him, and we asked our board, and it really was a split decision.”

As for the decision to make the puppet of Hunter S. Thompson, Hennessy and company were inspired by his politics, seeing elements of Thompson in their own art.

“We watched ‘Fear and Living in Las Vegas’ and reread the essay about Kentucky Derby, the way he calls out classism … that’s spot on,” Hennessey said. “That’s what I appreciate with him and the way he operated. The obnoxious womanizing and drug use, I could do without.”