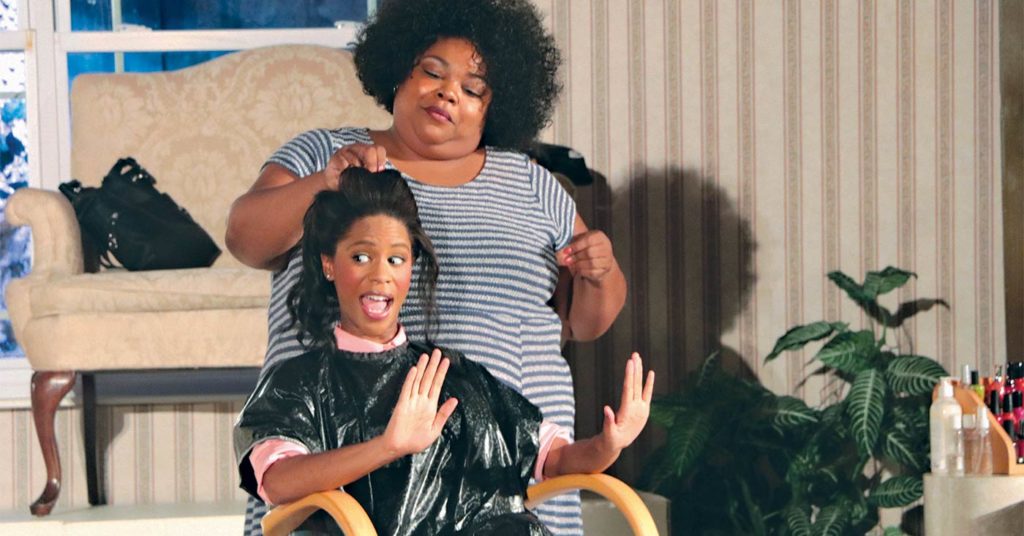 In the opening moments of Robert Harling’s 1987 play “Steel Magnolias,” Truvy Jones, the proprietor of a beauty salon, lays out her personal and professional manifesto: “There is no such thing as natural beauty,” she declares.

From a purely commercial standpoint, this maxim is good for business, of course. But in the world of the play, it also stands as a general moral principle. She might well be saying, “There is no such thing as natural virtue.”

Over the course of the play, we come to understand that beauty and goodness are hard-won traits that must be cultivated and groomed in the context of a caring community. And a new production of the play, which opened last weekend at the quite new Russell Theatre (formerly the auditorium of the old Madison Junior High School at the corner of 17th and Madison streets) does a very fine job of carrying that message.

This is the second production at the Russell Theatre from Faith Works Studios. The revival of the space, and the reintroduction of theater (and related arts education initiatives) to the Russell neighborhood, is an exciting development and a tribute to the neighborhood and its supporters.

Earlier this summer, the company presented a brilliant production of August Wilson’s “Fences.” “Steel Magnolias” may not be a masterpiece of the same order, but it is a superbly-crafted piece of theater. Using a single set, an ensemble cast of six and a great ear for Southern vernacular and wit, Harling gives us an anecdote-rich story that is populated with onstage and off-stage characters. And, in the process, he creates a comforting version of the South, where conflict and affection easily coexist, and “beauty” is just one reason for gathering in a salon (though wig and hair design by Reginald Johnson and costumes by Claudette McCracken make delightful contributions to the play).

Under the direction of Rush Trowel, this production is a confident, fast-paced and moving rendition of the script that captures both its humor and its emotional resonance.

Truvy (Morgan Younge) runs her salon with a big-hearted compassion that belies her commercial intentions, and Younge brings a charismatic energy to the role that makes it clear why her place is not just a business, but a kind of nondenominational gathering place where her customers — friends — gather to sort out problems, celebrate triumphs and mourn their griefs.

Annelle (LiAndrea Goatley) is a newly-minted beautician whose troubled background and insecurities find refuge in Truvy’s salon. Clairee is a widow whose irreverent wit and worldly sophistication is brought into sharp relief by Lauren White. Betty Macklin is superb as the cantankerous Louisa “Ouiser” Boudroux, much of whose energy is devoted to disputes with her neighbors (and caring for her dog).

The “Steel Magnolias” storyline plays out in a handful of scenes that take place over a couple of years. The main thread revolves around the a young woman named Shelby (Sidney Edwards) and her mother M’Lynn (Kristi Papaillier). Shelby, a diabetic, marries early in the play. Against her doctor’s advice and her mother’s admonitions, Shelby decides to have a child. It’s a decision that leads to a cascading series of medical complications.

But, as that story plays out, Harling builds detailed contrapuntal narratives for each of his characters. Clairee discovers a taste for international adventure. Ouiser’s curmudgeonly spirit is tempered by romance. Annelle finds solace in a religiosity that perplexes the other women in the circle. And, even when M’Lynn eventually experiences paroxysms of grief, inside Truvy’s salon there is a sense that goodness, beauty and solace are just a touch-up away.