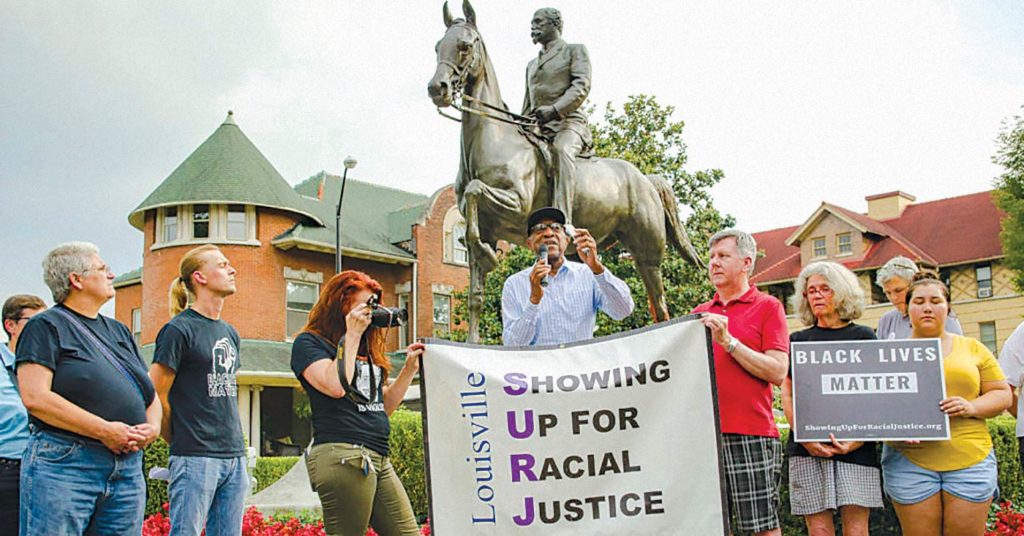 Bob Cunningham speaking in front of the Castleman Statue last June during a protest. (Photo by Nik Vechery)

As the Public Arts and Monuments Advisory Committee winds down its public comment meetings, its members are preparing to release a report by the end of the month that will help decide the fate of current and future pieces.

The report is not expected to recommend a fate for the statue memorializing John B. Castleman, a Confederate officer and guerrilla fighter during the Civil War who was imprisoned and exiled by the Union and later pardoned. He eventually joined the U.S. military and served as Louisville’s commissioner of the board of parks.

“I do not expect or want the report to make recommendations about Castleman and others,” said committee member Dewey Clayton, a UofL political science professor whose teaching and research areas include race, law and politics, specifically political discourse from the modern day civil rights movement. “Our charge is to ultimately produce a report to submit to the mayor that outlines a set of principles for evaluating Louisville’s existing public art and monuments.”

The report will be “a set of values and principles that people can determine if certain monuments should remain or stay,” Clayton told LEO.

The committee was formed in the wake of a violent protest in Charlottesville, Virginia, and as cities nationwide began contemplating what to do with public monuments built to honor Confederates. Almost immediately after Charlottesville, the Castleman statue in the Cherokee Triangle became a target of debate and vandalism.

Mayor Greg Fischer’s spokesperson, Jean Porter, told LEO: “They are due to deliver their report to the mayor by June 30, and then he will review it to determine next steps.”

Clayton declined to comment on what he hopes happens to the Castleman statue.

Among the charges for the committee is to: “produce a report outlining the Committee’s methods of inquiry and findings on the matter of establishing principles to guide decisions on whether to alter, preserve or remove public art and monuments.”

But what sort of values and principles will be outlined in this report?

Clayton said he and other members of the committee sent Fischer the following rough draft of principles:

“1. Louisville needs to align its public art and monuments with the vision of our city as a progressive, compassionate and inclusive community.

2. As a city, our goal is to retain the integrity of the history of our public art and monuments but does not glorify symbols that denigrate segments of our population.

3. Louisville’s public art and monuments should strive to educate our children and adults, and visitors to our city, in an honorable and honest manner.”

With months of public discussion and meetings, the final report will include a summary of public comments.

At the May 18 meeting, historian and former Metro Councilman Tom Owens spoke about how the city might handle future monuments. They might be more abstract than figurative, and they should be easily accessible, he said.

“Part of what accessible meant to us was an ability to walk up to it not look at it elevated, thereby making it inaccessible,” said Owen, whose expertise is in the history of Louisville and Kentucky and politics during the Civil War.

Committee member Chris Reitz, assistant professor of critical and curatorial studies at the Hite Art Institute, brought up the idea of “primary legacy,” or what was the intent of the statue. Also important is how we should measure local significance versus the national significance, he said.

“When evaluating monuments … the primary legacy of the figure should be primary concern,” Reitz said.

The question also is whether local and national significance differs. “Is there a national issue that outweighs the local significance?” asked Sarah Lindgren, city public art administrator.

Lots of questions. Lots of opinions.

It was all the way back in August 2017 that Fischer announced a process “to identify public artworks and monuments that could be interpreted as honoring bigotry, racism and/or slavery.”

Now, after all of the public comment and with the upcoming report, hopefully the city will finally and swiftly decide the Castleman statue’s fate.