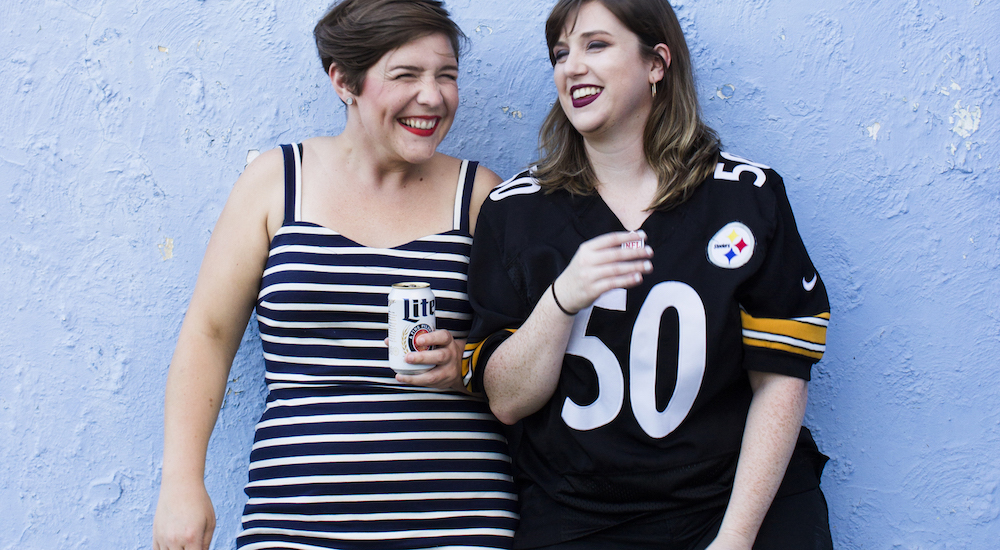 When “Your Uncle’s Girlfriend Comedy Tour” stops into Kaiju Tuesday night, Louisville will be treated to two of The Big Easy’s best comedians, Laura Sanders and Kate Mason. The New Orleans-based stand-ups are hitting the road for a two week tour through the South and Midwest with stops in Memphis, Chicago and, of course, Louisville. We caught up with them on the phone, while they were sitting in a Taco Bell drive-thru.

LEO: In my experience, if you’re in a Taco Bell drive-thru at this hour, you’re either day drunk or still drunk from the night before.
Laura Sanders: I do not need to be drunk for Taco Bell, sir! We started the tour last night, and this meal was kind of part of the tour contract. We knew we wanted to kick it off with a Taco Bell breakfast. This is the best-planned Taco Bell trip of my life. This trip was probably planned better than the rest of the tour.

You all come from one of the few cities that drinks more than Louisville does. Are you big drinkers? Will you be out soaking up the local color?
LS: That’s such a nice way of putting it.

Being from New Orleans you all have to have some epic drunk stories.
LS: Sorry, a barrage of embarrassing moments just ran through my mind so fast I got whiplash.

KM: One time, Quentin Tarantino was in New Orleans making ‘Django Unchained.’ He was at this bar called The Saint. And it’s one of those bars where nothing good ever really happens. I was there with friends, and I love movies. I love Tarantino. I was so excited to see him. So, I walk over to say something. He was with these two models. I start telling him how much I love his movies, and we’d watch them together as a family, which is ridiculous but true. He was very appreciative and very, very nice. So, I buy him a shot. He was like, ‘No, thank you.’ So, I sat there and took both shots. Then, my friends wanted to leave, and I was like, ‘No, I think I’ll just hang out. Quentin’s here. I think we’re going to become friends.’ I proceeded to spend the rest of the night by myself, trying to buy him more shots and then taking them myself when he refused. He didn’t talk to me because, of course, I’m the crazy drunk girl. I was there until 4:30 in the morning and got completely blacked out. I have blurry memories of the look on his face every time I tried to buy him another shot.

Maybe he’ll base a character on you, and that experience in one of his next movies.
KM: It would be ‘Drunk Whore.’ And I would be so excited.

As a public service I should let you know last call here is 4 a.m.
LS: Oh, thank you! I regularly use last call as an indicator of when I need to go home. It’s good to know that is getting pushed back 2 hours.

What has been the worst heckle you’ve had to deal with?
LS: There’s two kinds of heckle. As a woman, there’s the nice drunk lady heckle. I had a lady one time yell, ‘She has a nice smile!’ You can’t eviscerate someone who is ultimately being sweet and drunk to you. The worst was probably one of the very first open mics I ever did. I had a joke about being raised Catholic. A guy just yelled, ‘No you weren’t, slut!’ I was a 20-year-old virgin with braces. I was very confused as to why this guy was calling me a slut. All I could think to do was just say, ‘That’s what you think,’ and keep going. I was completely unequipped to handle it.

KM: I think the advantage women comics have over hecklers is that, as women, we’re used to being heckled in everyday life, in general. We’re used to men shouting random things at you. Also, I was raised in Pittsburgh, so I’m used to a lot of sport-related trash talk. Well, the show seems like it’s going to be a lot of fun…

LS: Oh, it is! I’m so excited to come to Louisville again, and Kate’s never been. And I’ve never been to Kaiju. Every time I come to Louisville, there’s a different, new venue. I’ve done a basement there, an art gallery and an upstairs. I’m very pumped. So we’ll see you next Tuesday.