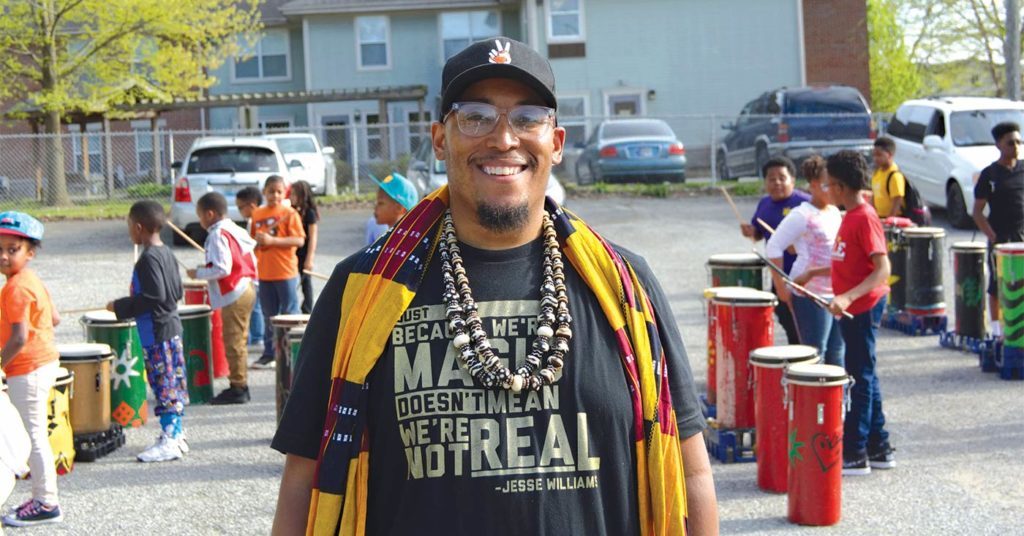 “I was born in Atlanta, Georgia. My dad is from Louisville. His family was one of the first families to move in Cotter Homes, when they first opened it up. My grandfather was a veteran, and they was setting up Cotter Homes and all the housing projects for veterans to live in. It was like an entry level for families to get on their feet and be able to establish themselves and move out of the projects into a single family home. My father had seven brothers and sisters. They were one of the first families to move there. My father was telling me how all of this land on the other side of 34th Street was ‘Little Africa’ before they started building projects over here. So, when we moved back to Louisville, we moved on 41st Street, between Elliott and Vermont, over by King Elementary School.

When we moved on Kentucky, I started going to the Parkland Boys & Girls Club. That was back in ’92. Mr. Ed ‘Nardie’ White was the director and had just started. He was adamant about having a Boys & Girls Club that was not completely sports centered. He was always around pan-Africanists, or people who studied pan-African studies. They were woke back in the ‘90s. They were wearing dashikis and medallions and smelling like frankincense and myrrh. Seriously, that’s how they came through. They were nontraditional people, much different than my aunt and uncles. They were church-going, Sunday school-attending and kids was in Jack and Jill. Here I was, in The West End, seeing people in African clothes and talking about the rites of passage at 9 and 10 years old.

My West End experience started at the Boys & Girls Club. While everybody was hooping and in the game room, I was in the arts and crafts room learning how to do macrame, making friendship bracelets and key chains. We would do mask making and papier-mache.

One summer, at the Boys & Girls Club, Mr. White applied for this grant through Arts Reach through the Kentucky Center. Through Arts Reach, he got a drum maker and a drummer to come teach us some classes. The drummer was Yaya Diallo, and the drum maker was Baile McKnight. Baile taught us how to make these drums out of PVC pipe and cowhide. We were young, making these drums the ones you see right here. We were cutting this pipe and making them. That was my introduction, hands-on, into this culture.

We had this program called ‘The Untouchables,’ which was a rites of passage for young black dudes, that showed us an alternative to gang life and the streets. I was in the Boys & Girls Club every day. My mother made sure that I was somewhere where I was supervised and had some structure. I started to absorb the culture. Mr. White definitely made sure that everyone wasn’t pigeonholed into peewee football or basketball. He made sure that there were alternatives. His goal was to make sure to match every dollar spent on sports with some type of artistic or cultural program and I’m a beneficiary of that.

When Mr. White said that he was ready to retire, this was maybe 3 years ago, he asked me to start coming back because he wanted me to take his job. I was not hesitant about that at all. I was like ‘Sign me up. Where do you need me to be?’ I started to commute back and forth from Lexington a couple days a week. That’s when all of those seeds that were planted started to really show their blossom, the growth and the development. We’ve been having a documentary filmed about us. We’re having a full-length feature film made about the Drum Corp, the success stories about the Drum Corp, the connection that Mr. White and I have and the leadership training and what it’s done for other kids.

Everybody has qualities and characteristics of being a leader. Everybody is not specifically chosen and cultivated in being a leader. I could have been a follower. I was on the cusp of being a follower, because I was stealing baseball cards, stealing magazine, and hopping the train. But through the Drum Corp, I was around people who felt that leadership was very important and necessary. The people who was teaching us were leaders. It was the Drum Corp and school that helped me be a leader.

There has to be young professionals, who are from this area and are products of this area, that want to come back and feed into this area. That’s null and void, right now. You can look around and the business owners are gone. The people that make it out don’t want to come back. That’s why there’s so many abandoned houses and trash in the neighborhood. There’s this stigma about West Louisville about what it is and what it ain’t. It’s important that we get people that made it out of the hood to come back to reinforce some of the things that were given to them, so that we can continue the success. If not, it won’t continue and that’s what we’re seeing. We are living in a time where, on a broad scale, there’s nowhere for kids to go. We don’t get the publicity or the notoriety, or the visibility. So, it seems that there’s nothing.

For a program like this, that’s been going on for 25 years, that has countless graduates of high school and college, executives, doctors, people with masters and doctorate degrees, and lawyers that come from this program. We just don’t have anything that tells people about what’s going on.

We are in preparation for the 12th Annual Da Ville Classic Drum Line Showcase at the Palace Theater. This has started about 12 years ago by high school freshmen, who were members of Drum Corp, my sister being of them. Mr. White saw to it that we had a traditional marching style, HBCU drum component in our program. With that, we asked Kentucky State to come down and do a clinic of sorts and showcase in this drumlins showcase. It started in ’06 at Chickasaw Park and it has grown to the Amphitheater, The Kentucky Center and now, The Palace theater.

We’re creating avenues for these kids to be successful. It’s amazing to see one our kids get his bachelor’s in social work in Lincoln’s ensemble. One of the girls who started the program is getting her master’s in social work. One of the other kids is in law school at the University of Kentucky. My sister has her master’s in speech pathology from EKU. She’s a linguist and getting ready to start working on her doctorate. That’s what we do with this program, is really showcase to the community the spirit of the drum. We wanna show the community that this is more than beating drums, it’s a life skill. They can see a kid who came from this group at seven years old and is now twenty-two and getting ready to graduate. When Black Panther came out, the whole world was like, ‘Wakanda Forever’. Everybody is really into this fictitious black society where we have this resource that makes us great. We have a real-life black society with a real-life resource that makes us great. We got a seventh grade drummer who has skills and will be in somebody’s orchestra or on tour with a pop star because the nurturing of her talents through this program. We want the whole city to see that.

If I could give any advice to the world it would be to use community and family to build the world that you want to see. Build partnerships and use people around you to make your situation and the world a better place. We need the village mentality if we are going to be successful and continue to help and grow with each other. If we are self-minded and have selfish ambitions and don’t put any energy into helping someone else, then our success doesn’t count.”  •