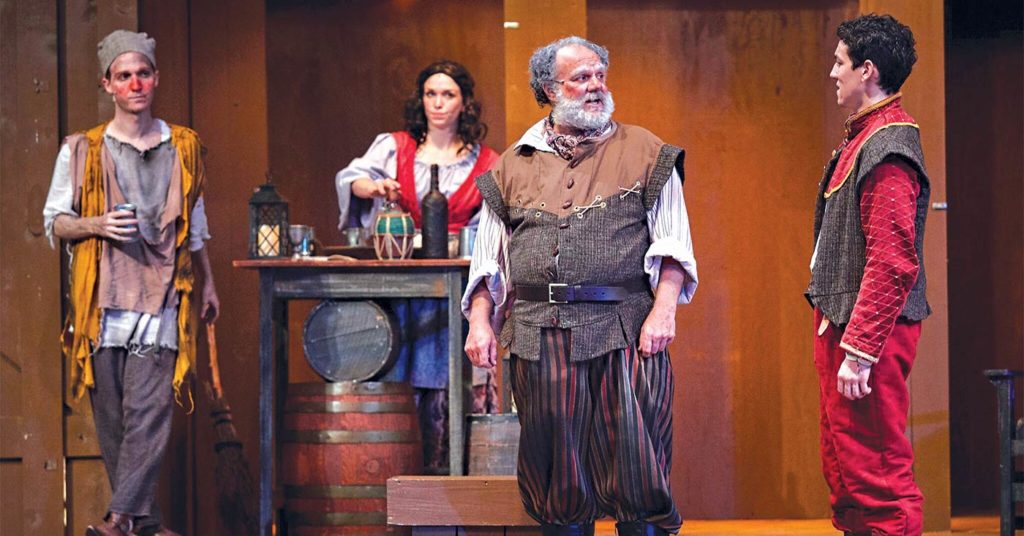 On St. Crispin’s Day in 1415, England’s King Henry V led an outnumbered force largely of peasants and yeomen into battle against an elite French army at the Battle of Agincourt. Henry V’s victory there is a foundational episode in European history and Shakespeare’s dramatization of the event in the play “Henry V” is among the great works of Western literature.

“Henry V” is a study in leadership. The king is a man whose vision and ambition are informed by a deep compassion for his soldiers and guided by a profound moral compass.

In Shakespeare’s play, that king disguises himself and wanders among his troops on the eve of battle to take their measure. Then, he rouses his “band of brothers” with one of the most stirring speeches in all of theater.

But this summer you can see where that heroic king came from. Notwithstanding its title, Shakespeare’s “Henry IV, Part 1,” the second play in this summer’s Kentucky Shakespeare Festival in Central Park, is really about the coming of age of young Henry V. It’s also the second in a four-play historical cycle — but never fear, the play stands on its own, and a prologue by Gregory Maupin will bring you up to speed lickety-split.

At this point in his life, the young Henry (Zachary Burrell), known as Hal to his friends, is an embarrassment to his father and a delight to the denizens of the taverns and brothels where he whiles away his time. His friend, mentor and guide in depravity is cynical, famously-fat Sir John Falstaff (J. Barrett Cooper). And their circle includes a group of memorable and energetic rogues whose character flaws are redeemed by their spirited vitality: Poins (Christian Wilshire); Bardolph (Neill Robertson); Peto (Shaleen Cholera); Mistress Quickly (Jennifer Pennington); and Doll Tearsheet — a character imported from Henry IV Part 2 as a substitute for the play’s customary Tapster (Hallie Dizdarevic). Jon Huffman plays the hapless Sheriff who tries to police this motley crew.

The tavern scenes overflow with antics and gags — including criminal plots and cover-ups. And, under Amy Attaway’s lucid direction, this superb ensemble brings a marvelous clarity to the group dynamics. The excellent decision to import Doll Tearsheet into this play from “Part 2” adds some zesty gender dynamics — and the indignities (and indignations) that result from Pennington’ and Dizdarevic’s interactions with the male counterparts produce memorable comedy.

Beyond the tavern, in the grown-up world of politics, the court of Hal’s father King Henry IV (Tom Luce) is bedeviled by hostile forces. Henry IV is surrounded by courtiers: Westmoreland (Tony Milder), Blunt (Dathan Hooper) and Lancaster (Will DeVary).

But Henry IV is faced with an active rebellion — and a faction of disgruntled allies who soon peel away from the king and make common cause with the rebels.

The central figure in opposition to the king is Henry Percy (Jon Patrick O’Brien), a hot-headed firebrand and warrior, nicknamed Hotspur. Hotspur is the same age as Hal — but unlike Hal, Hotspur has established himself as a leader of men — to the anguished chagrin of Hal’s father.

Revolution may be serious business, but there is ample room for subtle (and not-so-subtle) humor among these rebels — mostly stemming from the bemused efforts of Hotspur’s allies to rein in the impetuous young man.

As dramatic foils, Hal and Hotspurs are studies in contrasting character, one a devout ironist and keen observer, and the other a thin-skinned narcissist with hardly a shred of self-awareness Attaway, Burrell and O’Brien bring both men vividly to life.

Hal’s character — his embrace of moral ambiguity, his comprehension of the complex humanity of his tavern-mates — is revealed through his relationship with flawed and fascinating Falstaff, a man who is both ridiculous and profound, a man who cannot be reduced to his appetites and who articulates some of the most radical arguments Shakespeare ever offered. Cooper brings this gargantuan figure to life, and Hal loves him and learns from Falstaff not in spite of those flaws, but because of them. All of Hal’s interactions with Falstaff are fascinating to watch.

This is a play about war — and Shakespeare milks the battle scenes. But in the prelude to battle, the play offers us fascinating glimpse of the domestic relationships between Hotspur and his wife Lady Percy (Ernaisja Curry) and the Earl of Mortimer and his Welsh-speaking (and singing) wife (Abigail Maupin). These scenes — contentious and humorous, romantic and poignant — soften the hard edges of the story — and highlight the fine work of Curry and Maupin, both of whom also shine in this season’s production of “Comedy of Errors.”

Eighteen months ago, it was possible to dismiss the impending Trumpification of America with a host of plausible arguments of why “it can’t happen here.” Now, as weaponized government bureaucracies are increasingly used as tools of terror and intimidation, as checks and balances start to fail, as administration officials spuriously quote Bible verses to justify internment camps for children, those arguments increasingly ring hollow.

Looking for Lilith’s newest production, “We. Are. Here.” doesn’t discuss the newest news, but it is rooted in the lived experience of Louisvillians over the last 18 months and before.

It’s a chilling, fast-paced piece of “devised” theater, assembled by a large group of area folks (led by Jennifer Thalman Kepler). The action revolves around group of high school students, parents and teachers whose lives are affected by the patterns of racism, sexism, genderism, gun violence and nativism that run ever more rampant through American society.

Watching it is like reliving 18 months of headlines in 90 minutes — pussy hats, escalating expulsions of immigrants, athletes taking knees, the fearful impact of school shootings on students everywhere and more.

This isn’t polished theater — partly because the production had to be quickly moved from the MeX to Bellarmine University after last week’s fire at The Kentucky Center. But it has the power of authenticity and even-handedness. It should be seen. •