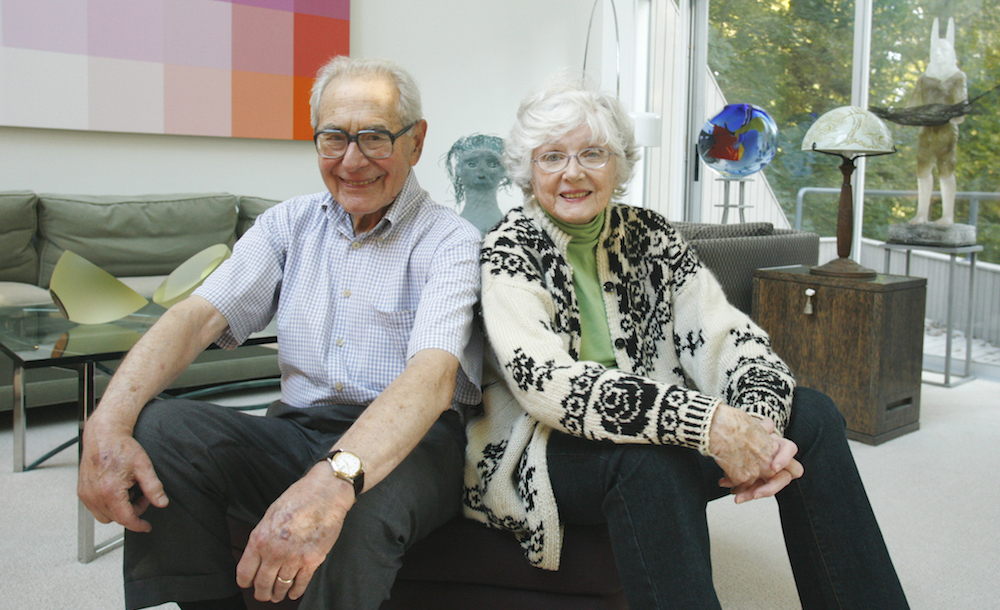 Occasionally I get mildly obsessed with something and that’s all I want to eat, read or see. One of my recent obsessions is the glass artist Karen LaMonte. I have Adele and Leonard Leight to thank for that.

Adele passed away on Saturday, June 9 at the age of 94. She was, along with her husband, a highly-knowledgeable contemporary glass art collector and donor.

LaMonte was one of their discoveries. The Speed Art Museum has “Odoriko” on display, a partial and promised gift of the Adele and Leonard Leight Collection. Even sitting among some glass heavy hitters, such as Harvey Littleton and Stephen Rolfe Powell, the life-size, cast glass sculpture holds its own. “How?” was my first question upon seeing LaMonte’s work. Adele and Leonard’s generosity to the Speed (and through the museum, to us) is the reason I found a new artist to admire.

They were also gracious hosts. Visiting the Leight’s house is an exercise in body control. It wasn’t until my third visit that I stopped holding my breath and clutching my purse. The house, designed by Fred De Santo, a young architect in Jasper Ward’s firm, was built to be a showcase for glass. (“The Leight House,” with photography by Ted Wathen and foreword and interviews by Peter Morrin, is a tour in book form).

As much as I swooned over the glass carefully arranged around the house — and I do so love the Dale Chihuly vessels, the Louis C. Tiffany lamps, the Libensky/ Brychtova sculpture — it was the kitchen that surprised me the most. Its surfaces are covered in a smorgasbord of 1920’s and ‘30s dinnerware (an early passion), with Susie Cooper cups and saucers lined up in places of honor.

Adele was a board member of the Speed Art Museum, KMAC Museum and the Kentucky Opera. Stephen Reily, director of the Speed, sent out a notice on Wednesday, June 13 to let museum supporters know of her passing.

“Adele and Leonard Leight began collecting art shortly after their marriage in 1949,” he said, “traveling the world to meet artists and to see their work first-hand. After collecting paintings and ceramics, they turned to contemporary glass in 1968 and never looked back. As you know, almost all of that internationally recognized collection has either been given or promised to the Speed. Adele’s approach to the Speed was both feisty and loving; her passion for our mission never got old.”

Joey Yates, curator at the KMAC Museum, said they “were quite close and talked regularly about art in Louisville. Adele’s passion for great art and design made her one of Louisville’s most fervent supporters of the arts. Her infectious enthusiasm for collecting … has become one of the best art educations I’ve received while working in the field. I’ve learned a great deal from her and will always treasure our friendship.”

Regarding a future memorial for Adele, Reily said the Speed Art Museum is consulting with the Leight family on possible dates in late July or early August. I’ll post the information on LEO’s art Twitter (@jtriplettart) when it is available.