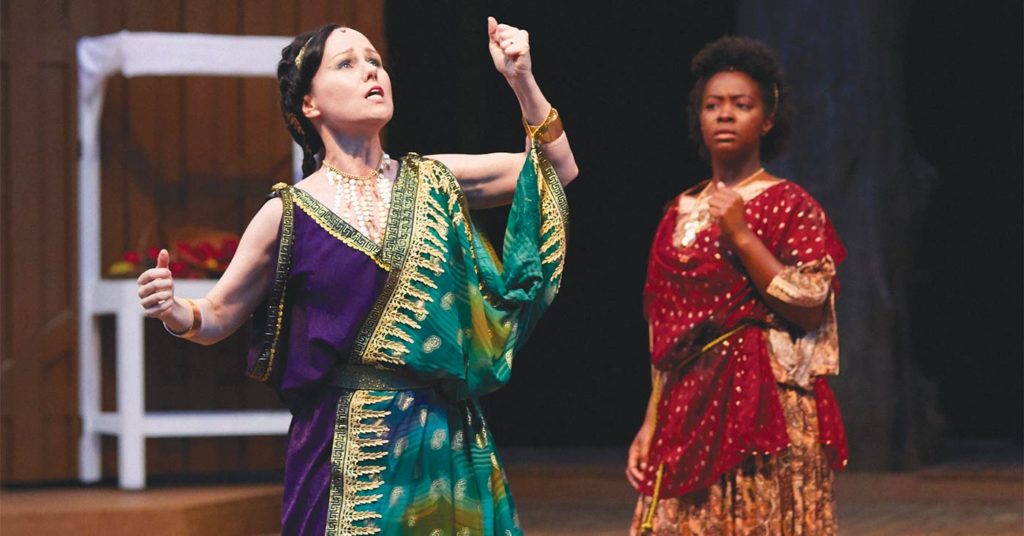 L-R: Abigail Bailey Maupin and Ernaisja Curry in ‘The Comedy of Errors.’ Photo is by Bill Brymer

America would be a different — and arguably better — place if high school English classes studied “The Comedy of Errors,” instead of cautionary tragedies such as “Julius Caesar” (which still afflicts my wife, Mary, with academic delayed stress syndrome) and “Romeo and Juliet.”

Of course, studying “Errors” would entail discussions of bawdy humor, easy morals, fluid identities and the wonderfully seditious world of farce. And it would probably lead to discipline problems. Teach kids about “Romeo and Juliet,” and you can suppress their spirits for an entire academic year. Teach them “The Comedy of Errors,” and you’re just inviting trouble.

Here’s all you need to know about Kentucky Shakespeare’s production of “Errors,” the first production in this summer’s Shakespeare Festival in Central Park: It’s free. Go early to catch the pre-show entertainment. Sit as close as you comfortably can; get close enough to see the perfomers’ eyes. Laugh. A lot.

There is deep stuff in this play. Critics agree that farce is a means for exploding the scary corners of our psyches and culture. But don’t think about it. Just sit back, relax, and let the comic therapy work its magic.

“Errors” is a farce about two pairs of identical twins, separated (by shipwreck) at birth. They are all unaware that they have doppelgängers. Each pair consists of a master (named Antipholus) and a servant (named Dromio).

And when one pair (let’s call them “newcomers”), played here by Crystian Wiltshire (Antipholus) and Neill Robertson (Dromio), arrives in Ephesus, home to the other pair (the “natives”) played by Shaleen Cholera (Antipholus) and Tony Milder (Dromio), a wild assortment of outrageously-funny, romantic, domestic, social, judicial and financial crises ensue. This is the stuff of Roman comedy or vintage TV cartoons. A lot of it depends on split-second coincidences that keep the twins from ever being in the same place twice. And everything hinges on great performances — which Director Matt Wallace elicits from a marvelous group of performers.

“Errors” is a sprint — both physically and verbally — and these four central performers set a fun, fierce pace throughout.

The domestic/romantic side of the story centers on Adriana (Abigail Bailey Maupin), wife of the noble native twin; her sister Luciana (Ernasja Curry); a kitchen-maid named Nell (Jennifer Pennington) who is hardly seen, but whose physical geography is described in memorably cruel terms; and a Courtesan (Hallie Dizdarevic).

Here you have Shakespeare at his most modern — plumbing sexual anxieties and pulling at the tangled relationship between love and money. Just watch as Maupin, Curry, Dizdarevic and Pennington (who also plays a stalwart Abbess) do their stuff. Maupin is histrionically fabulous as a woman who fears that her advancing age is alienating her husband’s affections. Both she and Curry sculpt their emotions with beautifully wrought physical and facial gestures — and they wield Shakespeare’s rhymed couplets with operatic virtuosity.

It’s notable and startling that the Courtesan and the Abbess are the most stable figures in this play — people of clear and forthright moral values. And Dizdarevic and Pennington are formidable in the roles.

On the social and business side of things, we know from the start that Ephesus is a strange town. In the opening scene, the Duke of the city (Gregory Maupin) sentences Egeon, an unlawful visitor (Monte Priddy) to death, but by the time Egeon finishes relating a tale of woe that involves a shipwreck and loss of half his family, both the Duke and the headsman (Dathan Hooper) give him a tearful, temporary reprieve.

An assortment of strange financial arrangements offers plenty of comic scope for Gregory Maupin (the merchant Balthasar); J. Barrett Cooper (the goldsmith Angelo) and Jon Patrick O’Brien (an officer of the law).

And, of course, just when things seem to have gotten out of hand, Shakespeare brings in a conjuror named Pinch (Jon Huffman), who kicks things up another comic notch.

Theatre [502] closed its season last week at the MeX Theater with Sherry Kramer’s “How Water Behaves,” directed by Gil Reyes.

It’s a brilliant, madcap Christmas comedy that brings the freewheeling spirit of, say, Moss Hart and George S. Kaufman to bear on contemporary issues and ideas. A struggling couple, Nan (Lo Abdelmalek) and Steve (Neil Mulac), share their apartment with a radiator that takes on the persona of a god ­— and thanks to great sound design by Andrew MacLennan, communicates like one, via incomprehensible gurgles and moans. Nan has a sane friend, Molly (Felicia Corbett), with whom she partners in a business involving writing divorce-related greeting cards.

Nan and Steve’s finances deteriorate when Nan is robbed — at a poetry reading featuring Allen (Erwin Jacob), whose work focuses on jingles about string theory.

After Steve’s prosperous brother (Bryce Wiebe) and his wife (Megan Mraz) deliver an extravagant Christmas gift — an enormous Trojan horse filled with Greek goodies — the couple concocts a scheme to save face: They create a bogus website called “All’s Well When it Ends With a Well,” that purports to dig wells in poor African villages and pretend to donate on behalf of their family members.

The scheme goes awry when the poet (smitten with Nan) donates thousands — and the site mysteriously goes live and starts collecting tens of thousands of actual donations. Somehow an African woman named Ayatunde (Janeane Lowden) sneaks into the innards of the Trojan horse. And that, if you can believe it, is when things got zany in this fab production from a company that revels in ingenious theater. Scenic design is by Hannah Allgeier. The run has ended, so for info go to theatre502.org

Throughout its quarter-century, The Alley Theater has managed to create wonderful pop culture mash-ups and cutting-edge drama — both with a serious sense of purpose. Among my top-10 theater experiences is its 2010 production of “Point Break Live!” — it required folks in the front rows to wear rain gear because the surfing scenes involved buckets of water. One of the most challenging plays I’ve ever seen was a production of “Coyote Ugly” last year. I’ve also enjoyed eating popcorn in that theater. And over the last year, under Joey Arena’s artistic leadership, the company has done stellar work.

Monday’s news that the company is gracefully closing the doors of its downtown theater after finishing up two scheduled productions this summer is sad. I’ll write about that in more depth when I can. For the moment, I will make a few observations. The spirit of The Alley Theater transcends the building. The creative folks in that company have been arts leaders in Louisville for a generation, and I cannot imagine they will disappear. The financial challenges of running a physical theater are enormous.

But Louisville’s theater scene has evolved to become the vital center of the city’s lively arts community. I have written before that Louisville’s independent theater scene is to theater as Asheville is to music — but I could just as well invoke Austin. It is rich in talent, drive and ambition. The death of a theater is a sad thing. Attention must be paid. But let’s also pay attention to the artistic successes The Alley achieved and to the work of the other great companies in the city.  Check thealleytheater.org for information about upcoming performances and refunds for productions after the closing. •