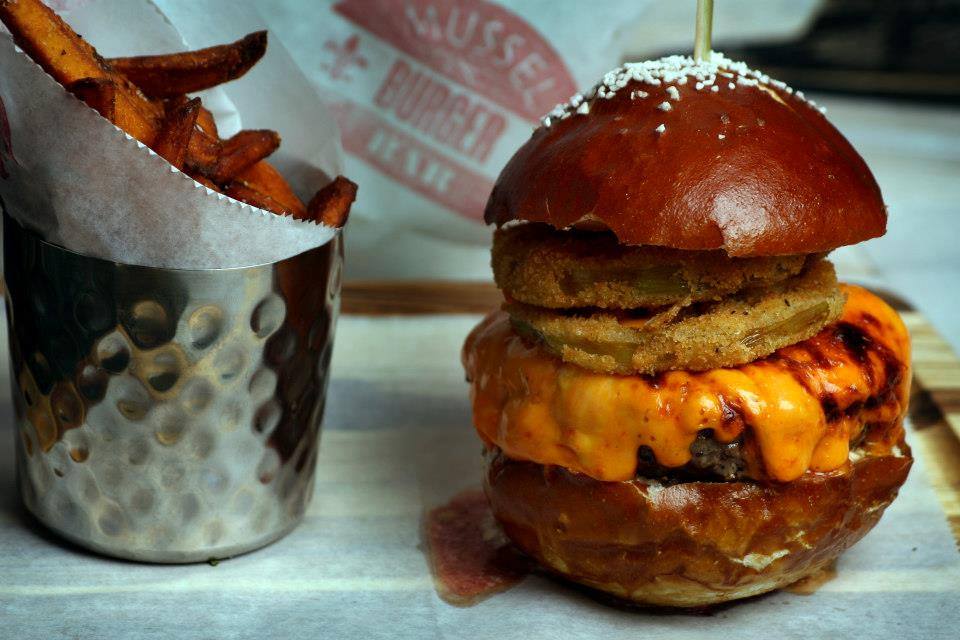 This week, 80/20 at Kaelin’s opened where the original Kaelin’s did business for 70 years. Kaelin’s claim to fame had been as the self-proclaimed inventor of the cheeseburger. We know LEO food critic Robin Garr will hit the new Kaelin’s soon. Until then, we thought it would be worth looking at his previous recommendations.

“Seven burgers, served with hand-cut fries, range from $11.50 (for the West Coast with avocado or the roasted vegetable burger) to $25 (for a dry-aged beef burger with cheddar and bacon). Dessert? Try a Kentucky butter Bundt cake ($8) or an old-fashioned milkshake ($8 or $9), or ($12-$13) an adult shake with a shot of bourbon or Irish.”

Øskar’s Slider Bar
3799 Poplar Level Road
Øskar’s is an eatery and watering hole in the style of a Minnesota dive bar, and it’s owned by the people behind Grind Burger Kitchen. So you know that these sliders are quality (step your game up White Castle).

“A cheeseburger slider ($3) made a good, basic starting point. It uses a small, flavorful round of organic ground beef from Foxhollow Farm, dressed in traditional fashion with thin-sliced pickle rounds, American cheese and the house’s light, tangy Grind sauce.”

“I can testify: That thing is freaking amazing. It’s plant-based and meat-free, but it tastes like good ground beef.  It’s the most “meaty’ meat-free burger I’ve ever eaten, right on in its flavor, texture, color, even the pink juice. Try it. You’ll love it and Mother Earth will, too.”

Grind Burger Kitchen
829 E. Market St., Suite C
Apparently, some people diss Grind for “daring to break the $10 barrier” for a burger. But Garr says Grind’s burgers are worth the price.

“The Southern burger ($14) was shaped by hand, flat and not particularly round, a rough and rather thin slab of beef, seared dark brown on the outside but still hot pink in the center, just as ordered. The meat within was tender, while the toothsome browned exterior held it all together. The Southern burger bears a schmear of smooth pimento cheese and two strips of thick-cut bacon that tasted great, but, thanks to its chewy and thick texture, was a little hard to bite through. A trio of thick “spicy pickle chips” were good, if more sweet than spicy.”

Red Hog
2622 Frankfort Ave.
Red Hog is a restaurant/artisan butcher shop, so there’s no surprise that their burgers are “Really F’ing Good.”

“That $15 burger, cheekily dubbed “Really F’ing Good,” is gently smoked in Red Hog’s wood smoker before cooking (medium-rare, as ordered), mounted on a pretty, golden-brown Blue Dog burger bun, and dressed with sweet bacon and melted blue cheese ($15). The burger was lean and not overly juicy. The combination of smoky aroma and funky blue cheese shouted the burger into silence, though. They sometimes offer a more spartan burger, and I’d like to try that.”

“The burgers alone dress in the styles of Spain, the Mediterranean, Argentina, Italy, Cuba, Mexico and the American South. (There’s also a short list of other sandwiches and mains, but you really need to come here for mussels and burgers.) … They’ll tickle your palate with such succulent combinations as the Argentinian ($13), a Latin-style stack of ground Angus, earthy provoleta (thick-cut provolone), sweet caramelized onions, Argentine chorizo sausage and garlicky green chimichurri sauce.”

Five Guys Burgers and Fries  |  Home Run Burgers & Fries
4116 Summit Plaza Drive  |  2060 S. Hurstbourne Pkwy.
Not every quality burger is at an expensive restaurant, which is why Garr took the time to review these chain-burger-joints.

Five Guys Burgers and Fries
“The burgers were cooked well-done, with no option offered, but remained juicy and, yes, greasy nonetheless. They were served on decent white sesame-seed buns. The dog was split lengthwise, with a good, beefy flavor. The fries were hand-cut, skin left on — crisp, hot and not overly greasy.”

Home Run Burgers & Fries
“The burger beef, as at Five Guys, was grilled well-done without asking, but it remained juicy and flavorful despite its gray-brown color. I went with the basics: American cheese, brown mustard, pickles, lettuce and tomato. A lunch cod sandwich came in “fingers” with thick, crisp and crunchy breading, grease-free, golden-brown and tasty.”