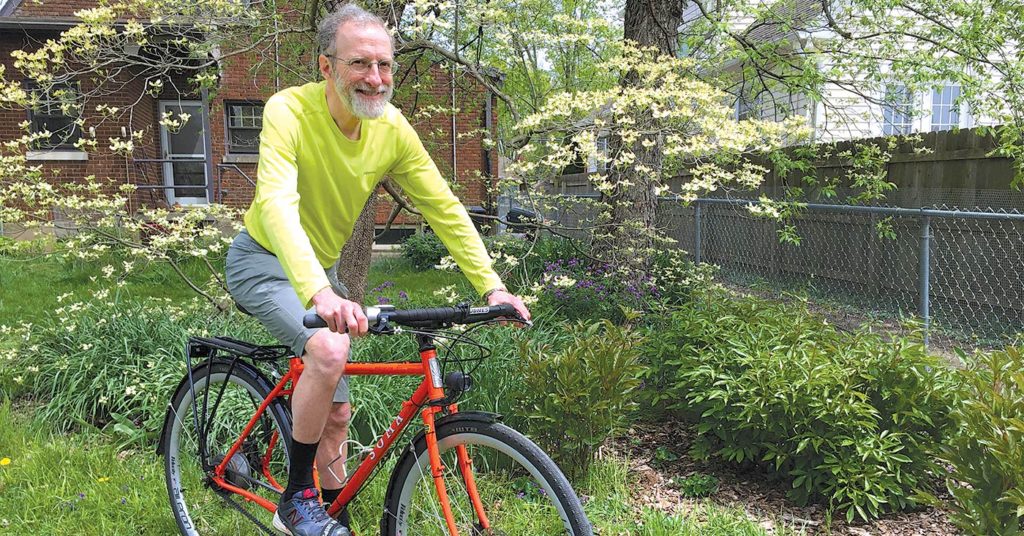 “The bicycle is a vehicle for revolution. It can destroy the tyranny of the automobile as effectively as the printing press brought down despots of flesh and blood.”

If you are keeping your eyes open for cyclists, as you should be, then hopefully you have seen Barry Zalph zipping back and forth around Louisville on his commuter bike. Now in his 60s, he’s been riding a bike virtually all his life. “I never really stopped riding from when I was a kid. A real turning point for me came when I was in high school at age 15 and frustrated at the world, I learned that riding all-out for about 45 minutes was a great way of relieving stress, and I would come back a whole different person.”

Later, Zalph began dreaming of riding longer distances when a classmate arrived at his boarding school, on a bicycle after a multi-day, 250-mile trek. Pedaling into senior year, Zalph began learning about environmental degradation and costs to public health due to motor vehicles. Here, he began forming a philosophy that would stay with him to this day.

In 1974, Zalph read the book “The Man Who Loved Bicycles,” by Daniel Behrman. It was an inspiration that solidified his dedication to the capabilities of the bicycle.

Indeed, Zalph has never purchased a car, instead using a bike for transportation and recreation, into and beyond his college years. He went on to found the local grassroots bicycle group Bicycling for Louisville and served as its executive director for five years.

Almost a year ago, Zalph was riding around 20 mph to worship service on his Bike Friday commuter when a Ford Explorer pulled out from a stop sign without yielding at a side street on Bon Air Avenue. Zalph avoided T-boning the SUV, but ended up smacking sideways into the rear quarter panel. The bike was totaled, and Zalph sustained what he said was “a constellation of boo-boos on my left elbow, and a really sore left hip but no broken bones or internal injuries.”

He was fortunate to get away with just those injuries, as the collision had sent him airborne over the handlebars.

After a moderate recovery, legal assistance and the arduous task of wrestling with the motorist’s insurance company, Zalph’s thoughts turned to his next bicycle. “The  crash gave me the incentive to build a new commuter bike, and it gave me the opportunity to include all the features I wanted.”

Over 40 years of bicycle commuting experience led to the selection of components for building of this custom bike. “As a result,” he said, “I have a bike that stops on a dime, handles well on loose or wet surfaces, has bright built-in lighting that’s powered by a front Dynamo Hub, and a low-maintenance Gates carbon fiber belt drive with NuVinci N360 variable speed transmission.”

The frame is a SOMA Wolverine Version 2 in bright Halloween orange. The frame is specifically made for belt drive with a removable section of the frame for belt changes. Contact to the ground is made with the 34-width, multisurface tubeless tires and tubeless compatible Velocity Aileron wheels, Avid Mechanical Cable-Actuated brakes are dependable and powerful. Multi-position Jones handlebars add comfort and variety in riding positions. Several of the components are manufactured in the U.S.

“I could have literally spent twice as much for the ultimate commuter bike,” he said. Because he didn’t have the budget for a lighter, custom-fit frame or a “bulletproof” Rohloff Speedhub, Zalph considers this SOMA ideal for his needs. “I like building wheels, and these came out really well,” he said, as he considered putting them on the truing stand to see if they are still true after 2,500 miles of use.

His advice for anyone considering commuting by bicycle?

“Make sure your bike fits you,” Zalph said. “Equipment is less important than bike fit. If you’re not comfortable on the bike, you’re going to injure yourself, or you’re not going to ride.”

People have different reasons for being excited by a bike, such as its color, or that it’s technically sophisticated and snazzy: “…Pick a bike with whatever features make you enjoy it,” he said.

If you are a beginner or less experienced cyclist be sure to take adult, bicycle handling and safety courses with The Louisville Bicycle Club or “Cycling Savvy” with Tom Armstrong, both great local sources for bicycling education to build your confidence and ability.

Moving forward, Zalph is rolling again. He’s enjoying a bike that fits his experiences and goals, one that is built specifically for the purpose of getting around Louisville, or anywhere, safely and efficiently with confidence.

I asked how would he grade Louisville’s efforts to be more bike friendly compared to some of the best American cities: “I think Louisville is still somewhere around middle of the pack, but middle of the pack is a whole lot better than it used to be!” he said.

“Compared to 20 years ago, the number of people out riding and commuting by bike has increased tremendously.” •