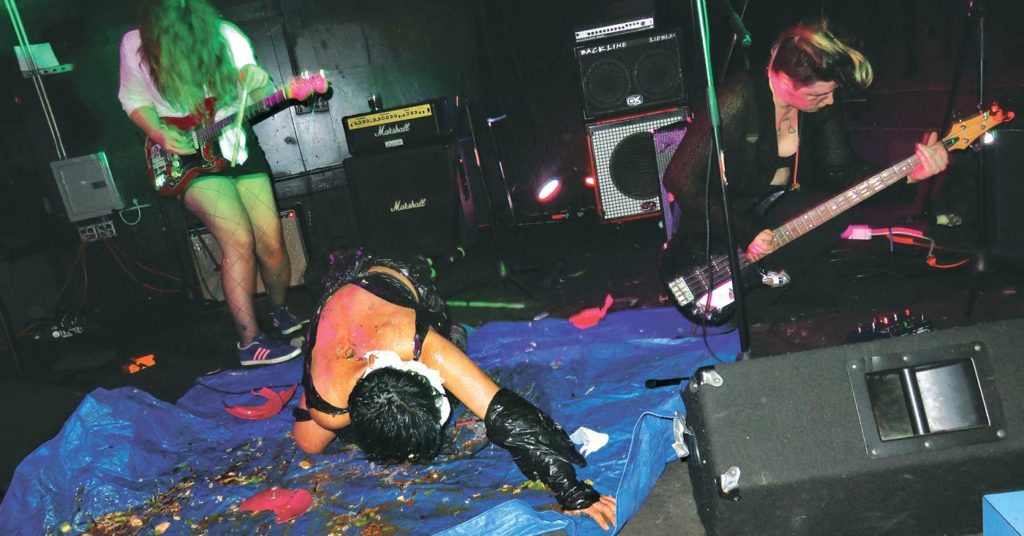 So named for laws that discriminate against the transgender community, the quartet Bathroom Laws started off when singer Severin Martinez and bassist Radet 5 met at UofL’s LGBT Center. Self-described as creating “sardonic trans music to draw poison from our psyche,” the band balances punk hooks and unflinching politics on Pyss in Peace, their recently-released record, which is available by Bandcamp download and on cassette.

LEO: Tell us a little about Pyss in Peace. Is there one central theme?
Severin Martinez: I feel like we would come up with stuff that we were angry about.

Radet 5: ‘Nice Gender’ and ‘Slur Slinger’ were really written before we were a band. I wrote the lyrics first, and Sev came up with a vocal melody. I find it really easy to write lyrics to a vocal melody.

On ‘Nice Gender (Did Your Parents Pick It Out For You?),’ what do you think parents or caregivers of children can do to best identify their children’s pronouns?
SM: First of all, don’t do the thing where you buy them the exact stuff where you’re molding them.

5: The surrounding culture is such a big influence. Definitely don’t hold a gender reveal party. With people in general: Don’t just build up an expectation of what people are. We’re literally different people every day. I know that for me, coming up, there is definitely a lot of transphobia and transmisogyny that is coloring people’s feelings of me. A lot of it is just that expectation. You can let off those expectations of what people mean to you, just because you have them.

Is ‘You Suck’ about one person in specific, a group of people or just people in general?
SM: I feel like I’m always going into a thing of different levels of disappointment. At that point, it was racist micro-aggressions, or, if it wasn’t that, it was some transphobic bullshit. There was always something else.

5: When I was writing the lyrics to that, I was applying it to myself, too.

‘Unwritten Rules’ is a closer that ties up the album neatly and digs into the subject of the band’s name and album title in particular. How do you see the situation surrounding the bathroom laws playing out?
SM: It’s both real and a threat. The lyrics that I wrote in there are kind of… I don’t know. It’s kind of the waking nightmarish thoughts. I’ve definitely had times where I’ve had real people that I was with getting harassed in bathrooms, not like that, but my friend left in tears. It’s just this weird place, where you’re with anyone. Just being in that kind of enclosed space with possibly people that are maybe a danger to you.

Tom Crowley [drummer]: It does normalize the violence that is always there. It legitimizes that.