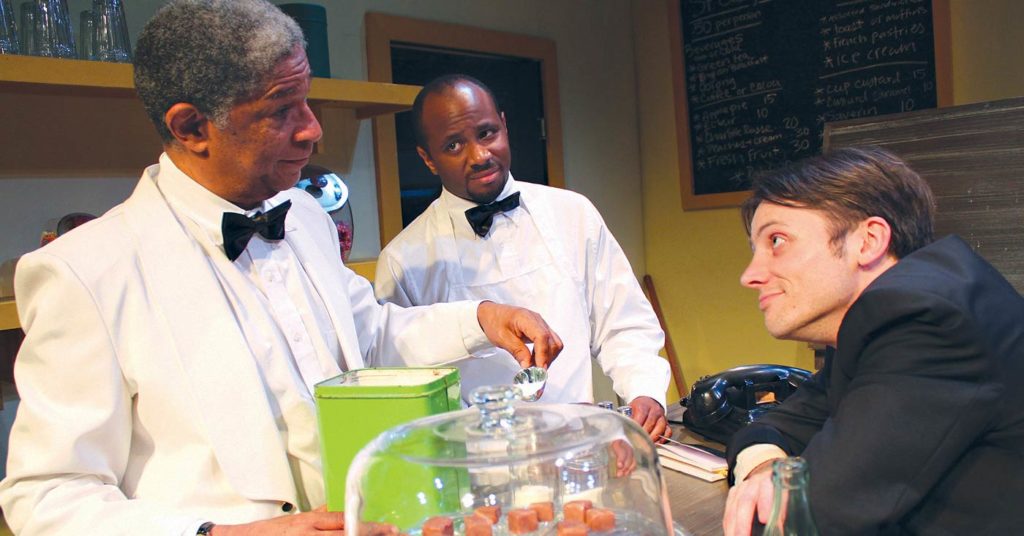 Last week’s announcement that The Alley Theater will shut its Main Street theater in August first highlights an enormous problem facing Louisville’s arts scene. I will discuss that below, but first let’s note that The Alley is still open.

This weekend, the company opens a three-week run of “Saucy Jack and the Space Vixens,” a sci-fi musical with a cult following that had its origins at the Edinburgh Fringe Festival in 1995 and, since then, has won audiences all over the world. In July, the company will end its run with an original pop culture parody called “Star Trek: Boldly Going WAY Too Far; THE FINAL FRONTIER.”

If you’ve never seen an Alley production, you should take these final opportunities. For one thing, the theater’s concession stand offers popcorn (and beer) at prices you’d never find in your multiplex. For another, this is a company that revels in pop, zany antics — though over the last 25 years the company has also presented plenty of work by modern masters like Dario Fo, Samuel Beckett and Tom Stoppard.

The closing of the venue does not necessarily mean the end of The Alley as a theater company. Like most of Louisville’s independent companies, The Alley can continue to produce in rented or borrowed spaces.

But in Louisville Metro, there are hardly any purpose-built theater facilities other than those that are home to school and academic programs or house-busy resident companies (such as Actors Theater of Louisville; Derby Dinner Playhouse; area community theaters; and the three resident companies that present at The Henry Clay).

For the most part, the local indie companies are always creating DIY productions in facilities that lack even the most rudimentary technical facilities required to make theater — like lighting and sound systems. The sole exception is the admirably-equipped Mex, the black box space at The Kentucky Center.

Those deficits have diminished the quality of the writing and acting produced by these independent companies. Week after week, these itinerant companies produce important, courageous, exciting art that runs the gamut from classical theater to avant-garde experiments. We have Spanish-language companies that project English-language supertitles for those of us who don’t have the language. We have an excellent company of actors, all of whom are blind (the Imagine Blind Players). We have companies that devote considerable resources to exploring important local and regional social issues around race, class and gender.

And all of these companies are creative, resilient and passionate enough to make great theater under extremely difficult circumstances.

The fact that these companies persist and that they somehow find and hold onto loyal and enthusiastic audiences is a tribute to the quality of the work they’re doing.

But, to a large extent, that work amounts to an underground art form, invisible to lots of folks who love theater. Some of these venues are out of sight and in obscure locations: In many cases you could walk or drive past one of these productions without ever realizing that an act of theater is happening inside. And as we all know, apart from LEO and a few online sites, media coverage of local arts has effectively disappeared.

I have written before that Louisville is the Asheville, Nort Carolina — or perhaps Austin, Texas — of American theater. As with our dining scene, the range and quality of theater offerings is fantastic.

Alas, it is largely under the radar — because there is no “theater row” in Louisville, and because it’s more difficult for media to comprehend a city’s art form than it is for them to hit the local bars and restaurants on a 48-hour visit.

But, imagine that an alliance of theater companies banded together in an effort to fundraise, build and jointly operate a theater complex that included, say, three appropriately-equipped venues: a conventional, proscenium theater, a thrust space and a black box; rehearsal spaces; generous space for building and storing sets, costumes, etc. and appropriate administrative and box office space.

Imagine a well-designed space that would enable multiple productions to run concurrently in repertoire — a kind of multiplex theater (ATL manages this formidable task during the Humana Festival).

Imagine that the complex was in a visible, convenient location — maybe somewhere in one of Louisville’s “Off Broadway” sections.

And imagine that there were a major anchor company — perhaps Kentucky Shakespeare, which over the last few years has become a major force in Louisville arts and has built on its excellent summer season to become something of a four-season company.

‘Master Harold and the Boys’

In the excellent, purpose-built Henry Clay Theatre, Bunbury Theatre is closing out its season with Athol Fugard’s “Master Harold and the Boys,” directed by Baron Kelly, head of the graduate acting program at UofL.

Fugard is a South African playwright and novelist. The film based on his novel “Tsotsi” won the 2006 Academy Award for Best Foreign Film.

“Master Harold and the Boys” won lots of awards, too. And if I were giving out awards, I’d give one to this production. It seems a simple play, at first. Fugard sets his story on a single day in a tea shop owned by a white family and staffed by two black men. The black men, Sam (Clyde Tyrone Harper) and Willie (Tyler Madden) are cheerfully obsessed with competitive ballroom dancing. Both men also have friendly relationships with Master Harold (Cameron Murphy), the teenaged son of the white owners.

Sam’s relationship with “Hally” dates to the youngsters’ childhood, and the two have forged a profound link that grows in importance, as we discern indirectly, via a series of phone calls, the shattered nature of Hally’s relationships with his parents. For much of the play, the three actors revel in the script’s heady wit. The script overflows with smart, jubilant wit and the language dances with as much fun and grace as Sam and Willie’s occasional flashes of footwork — notwithstanding Hally’s occasional outbursts of juvenile petulance.

Beyond that, I’m reluctant to say much. But I will say that this is a powerful and unsettling play that speaks to our time. This production is a commanding performance of a masterwork. •