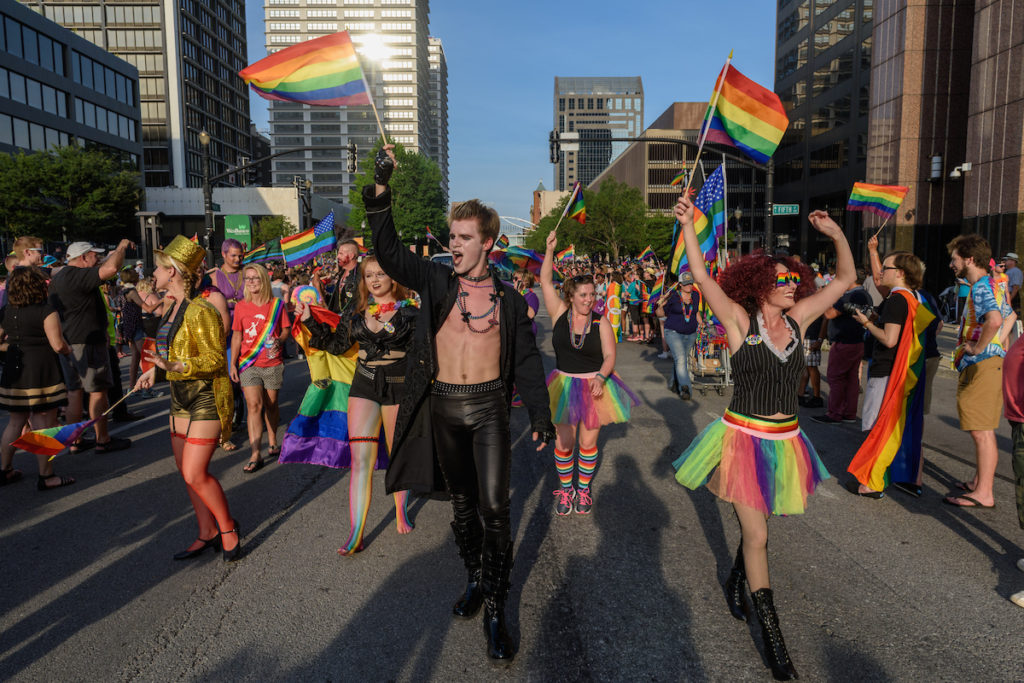 The Lesbian, Gay, Bisexual, Transgender, and Queer (LGBTQ) community and their friends, family and supporters walked and lined Main Street from Floyd Street to the Belvedere for the Kentuckiana Pride Parade, Saturday, June 16, 2017 in Louisville, Ky. (Photo by Brian Bohannon)

2018 Kentuckiana PRIDE Parade and Concert (June 15–16)
Various locations
Free-$10  | 7-11 p.m.
Head to the corner of Market and Preston streets for the start of this year’s Kentuckiana PRIDE Parade. The parade will travel north on Preston, east on River Road and continue to the festival site at the Big Four Lawn. The concert costs $10 and features live music on three stages, with acts that include Big Freedia, Bridge 19 and Brandon Stansell. And after that, head to PLAY Louisville for the official Pride After Party with foam and the sounds of Big Freedia with guest DJ VJ Stretch. The first 300 people with Pride wristbands get in free. To read LEO’s entire PRIDE issue online, click here.

Girls Rock Louisville 2018 Summer Camp Showcase
Zanzabar
$5  | 6 p.m.
Each year, Girls Rock Louisville holds a summer camp, aiming to empower girls and gender-nonconforming youths through music. During that time, the instructors encourage the campers to form bands and write songs. After the camp, the newly-formed bands play their freshly-written songs in public. This year, nine of those bands will play a few songs at Zanzabar on Friday. It’s a great concept from an important organization. To read LEO’s feature on the Girls Rock Louisville summer camp, click here. —Scott Recker

World Cup Viewing Parties (through July 15)
Molly Malone’s, all locations
Free  | Times vary
The biggest tournament for the world’s most popular sport has begun. Now, you could sit at home and watch all the games by yourself, but what fun would that be? Head to Molly Malone’s where all the games are being shown (even that one at 6 a.m. on June 16), and during all the games you can get Bud Light pints for $3 (even during that one at 6 a.m.). You can also play in Molly’s FIFA predictor game, guessing the winning score of a match gets you a prize.

Racism is Petty 5K Run/Walk and Virtual 5K Run
Shawnee Park
$18-$25  |  8-10 a.m.
Racism is Petty 5K Run/Walk promotes inclusivity and healthy living as you raise money for charity. The event is hosted by Ask A Black Girl, which is raising money for The Sickle Cell Association of Kentuckiana. If you can’t get to the race but want to support a good cause, then sign up for the virtual 5K — run three miles on a treadmill or at your local park and post a picture on social media using #RacismIsPetty. Go to the website for more details. —Taylor Moore