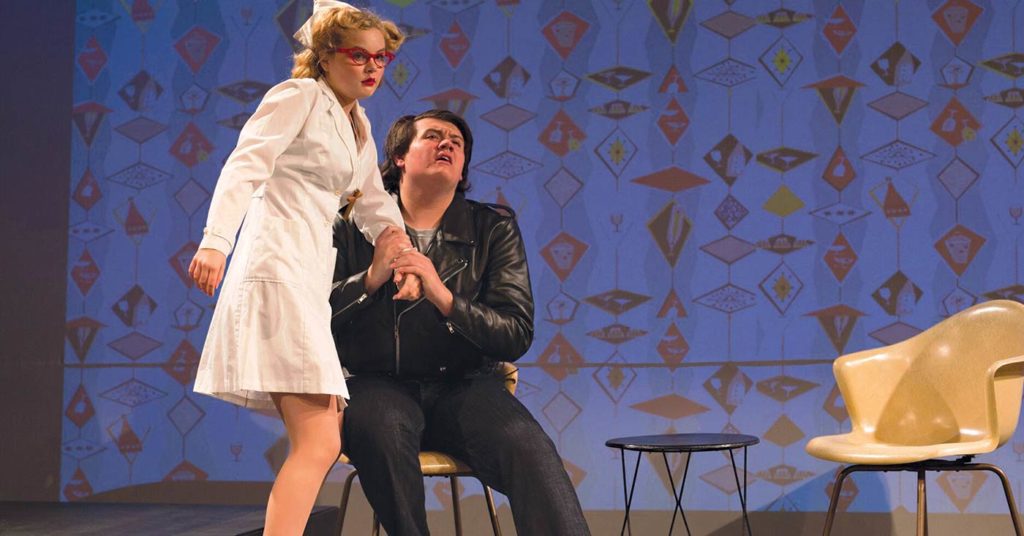 L-R: Bella Detwiler and Alec Elmore in ‘The Merry Wives of Windsor.’ Photo by Crystal Ludwick.

As always, this is a massive undertaking that involves 62 area performers from grades four to twelve. And as always, the leaders and students at Commonwealth are doing inspiring work. This Festival is passion in action.

Pennington gives “Merry Wives” a doo-wop spin. She sets the play in a fantasia ‘50s America, where the guys wear their hair slicked back, the gals look like they’re on the way to a sock hop, and the incidental music includes tunes from the likes of Buddy Holly and Elvis Presley.

In broad strokes, “Merry Wives” sets up a rich tangle of male-female conflicts. There is Falstaff versus the two wives. There is the young Anne Page (Natalie Koch) versus the world. Her parents want her to marry someone suitable — a pretentious doctor (Spencer Neichter) or the comically dull Slender (Alexander Miguel), but she prefers the romantic, impecunious Fenton (Abel Sgro).

In “Merry Wives,” Shakespeare assembles one of the smartest, funniest groups of women ever to appear in a single play. Among them is the doctor’s assistant, Mistress Quickly (Bella Detwiler), whose superbly zany performance is enhanced by Lindsey Chamberlin’s costumes. And thanks to gender-blind casting, we see some sharply drawn performances by women in several roles often played by men (not least, Meaghan Northup’s fine turn as Host of the Garter Inn).

In other roles, Field Oldham is memorable as an outlandish parson whose speech is hard to parse. Phoebe Brown and Jessie Burke acquit themselves well. And as Rugby, the doctor’s servant, Nolan Davis Brown has a marvelous, eye-catching moment as a watchman at the gate.

In pre-performance remarks, Director Charlie Sexton observed that although “Measure for Measure” is technically a comedy (since it concludes with a slew of weddings, instead of a bloody slaughter), it’s a grave and serious play.

This is one of the plays that gets slapped with the annoying, misleading 19th-century label “problem play” — a label that needs to be retired.

“Measure for Measure” is Shakespeare at his most modern. It’s a strange and disturbing investigation of moral corruption in the public sphere. And though critics have often argued that the script includes some implausible elements, I say there is nothing in this play that is less plausible than our contemporary politics.

The story kicks off when Duke Vincentio of Vienna (William Ngong) realizes that under his leadership his people have lapsed into moral decadence. Troubled, he decides to leave the city for a time and delegates Angelo (Noah Bunch) and Escalus (Jacob Craigo-Snell) to rule in his absence.

Leaving the impression that he’s away on a diplomatic mission, the Duke disguises himself as a Friar and returns to the city to observe.

In a fine stroke, Sexton places the action in 1930s fascist state, a place where the moralizing martinet like Angelo can seize enormous power against a seamy backdrop of cynicism, bawdy houses and betrayals.

This is a world where the woman running the bordello, Mistress Overdone (Lilly Rich) may be the least hypocritical person around and ineffective voices of reason, like Escalus, enable all manner of horrors.

The action revolves around the plight of Claudio (Jackson Guarino-Sanders) who has impregnated his betrothed (Ava Middleton) out of wedlock. For this crime, Angelo sentences the young man to death. Claudio’s sister Isabella (Frances Rippy), a novice nun, attempts to intervene on his behalf.

When Angelo offers to spare Claudio’s life — on the condition that Isabella sleeps with him — the idealistic nun and her brother are plunged into a moral crisis — she values her virtue above all and he, of course, values his life.

The disguised Duke devises a complicated bedroom scheme involving a woman Angelo once betrayed (Makayla Roth) to spare both Isabella’s virtue and Claudio’s life. Nothing is simple in this dark play. But compelling performances — highlighted by Rippy’s engrossing, tragic performance, Max Jablow’s wickedly cynical Lucio, Ngong’s fine outing as the Duke and Bunch’s creepy — yet somehow vulnerable portray of Angelo. Vivid performances are also offered: Chloe Finch as a prisoner who defies a death sentence, Ella Atherton as a proud executioner, Lily Schweitzer as a compassionate prison official, Killian Meaney as a pimp, Bryce Abell as one of Shakespeare’s comic cops, as well as Ellie Westfall and Dylan Manning. Technical work by Laura Patterson, Natalie Ambrosino, Kathy Preher-Reynolds and Gerald Kean lends the production a foreboding atmosphere.

Alas, I couldn’t fit “Richard III” into this week’s schedule — but I will report on it next week.

“Die, Mommie, Die!” is one of Charles Busch’s campy satires that calls for shamelessly over-the-top performances. And that’s what Director Michael Drury and his performers deliver at the Henry Clay Theatre, where Pandora Productions is running the 2003 comedy through this weekend.

Where “Measure for Measure” explores moral questions, “Die” pretty much discards any hint of a moral center in this satirical look at a dysfunctional ‘60s showbiz family. Sol (Sean Childress) is a failed movie producer. His wife Angela (played with cruel flamboyance by Jack Wallen) is a failed singer — and both of them are pretty shameless adulterers. Their adult children, played by Sabrina Spalding and Eli Lucas are emotional toxic waste sites. Their sanctimoniously religious (and ever-so-intrusive) maid (Susan Crocker) has romantic designs on Sol. And Angela’s tennis instructor Lance has romantic designs on everybody.

It’s a frenzied madcap affair that involves, among other things, murder by suppository and plenty of gender-weirdness. If you’re looking for subtle, serious fare, this ain’t it. But it’s a fun outing for a company that usually thrives on more serious stuff. •