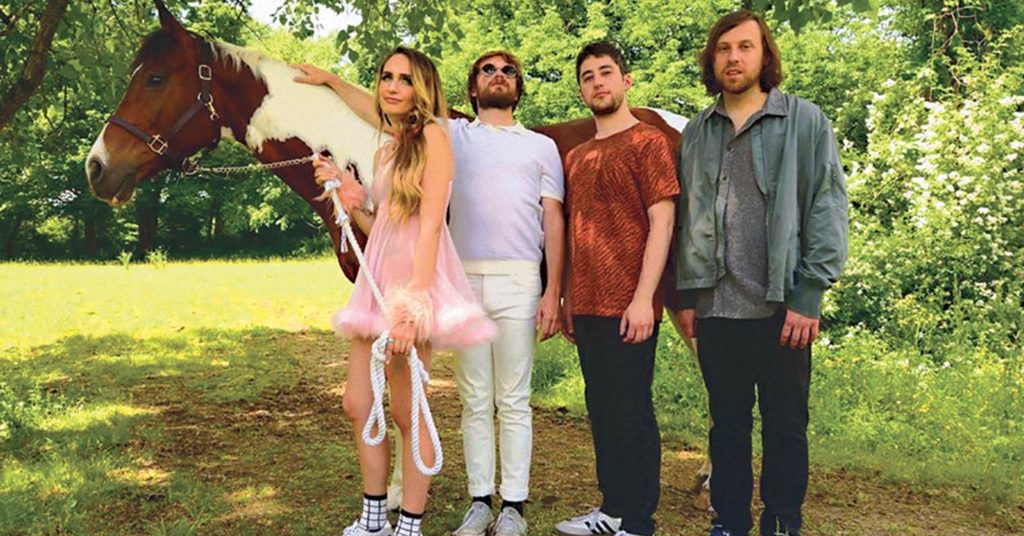 For their third LP, Speedy Ortiz had to go back to the drawing board after scrapping an album that just didn’t say the things that needed to be said in our present era. The resulting Twerp Verse brings a ferocious hammer, tackling #metoo, race, inclusion, isolation and, maybe most importantly, empowerment — all while continuing to launch those huge guitar hooks and Sadie Dupuis’ hallmark wordplay.

LEO: You tackle a lot of big issues on this record, while still keeping the lyrical mystery.
Sadie Dupuis: I like the expression you just used, ‘lyrical mystery.’ That seems really fun to me. I’ve always viewed getting the lyrics right as this big puzzle, and wanting to make sure that they do things that surprise me and that they would be fun to read on the page and not just hear in the song. So, while these are very intentionally big subjects that we’re working on, I didn’t want to lose that sense of play that is sort of inherent to Speedy Ortiz lyrics. It’s a balance of that. Wanting to sort of, not explore, but really just vent about the things that frustrate me on a daily basis, but also do it in a way that the lyrics can be something interesting to dig into and kind of unpack.

Was there anything subject-wise that you tried to tackle but couldn’t articulate in that way?
There are a couple songs that are older, that maybe I had written years ago, but didn’t feel like it was the right timing for me to put a song like that into the world. Like ‘Villains,’ for example, is from almost four years ago at this point. And I had been holding onto this demo for a long time, because it just didn’t seem like a subject that I was ready to delve into, specifically because it is about harassment and sexual assault. Consent is much more a part of our national conversation at this point and it felt like a time that it was OK to release that song and that maybe it could contribute something to somebody else.

It’s worth noting that I didn’t hear any songs that are explicitly like, ‘That asshole in office.’
A lot of the record is not so much anti-Trump. But it’s sort of about horror at this time. But also celebrating the people who are pushing back against the horrifying things. I think a lot of the record I tried to write about maintaining optimism. And most of the optimism that I feel is from seeing that there are actions almost every day. People are showing up. Hundreds or thousands of people are showing up. And so I think that as there’s plenty to protest, there’s also a lot to affirm and see as useful productive behavior in shaping a world that can exist the way we want it to. So I think a lot of the record is sort of about that. Looking at who’s doing right and trying to support that.

You have a new video that features a fish-head monster thing. I think it’s written somewhere, ‘We’re a band that’s really into monsters,’ and I thought, ‘Well there sure seemed to be a few extra scary ones out there right now, if you’re looking for them.’
Oh, God. The metaphors have just come so much easier. We’ve always done monster videos, and now they really resonate.

Your last record was the solo Sad13. There are moments on this new LP, like ‘Lucky 88,’ that seems like a direct line from that project. Will there comes a time when it all sort of starts to be more of one thing?
I think the big difference is just that there’s collaborators in this project. Specifically, Mike [Falcone] and Darl [Ferm]. To me, ‘Lucky 88,’ the best parts of the song came from Mike and Darl, our drummer and bassist, respectively. I had just come up with this little dinky demo with an OP-1, a little pocket synth. So I actually wrote almost no guitar for this song when I sent them this demo. Mike sent me back five different WAV files, and I was like, ‘Oh, I like two and four, what are you leaning towards?’ And he was like, ‘No, we’re gonna layer all of them at once.’  And I love that idea of how that song builds. And that was really, truly, Mike’s thing. So, it could never have been a Sad13 song, because the whole point of that project is that it’s just me working it out at home, and not having collaborators. Whereas, I’m so thankful to work with these guys and this band. And I dunno, the song would be such a different thing if they hadn’t added what they did.