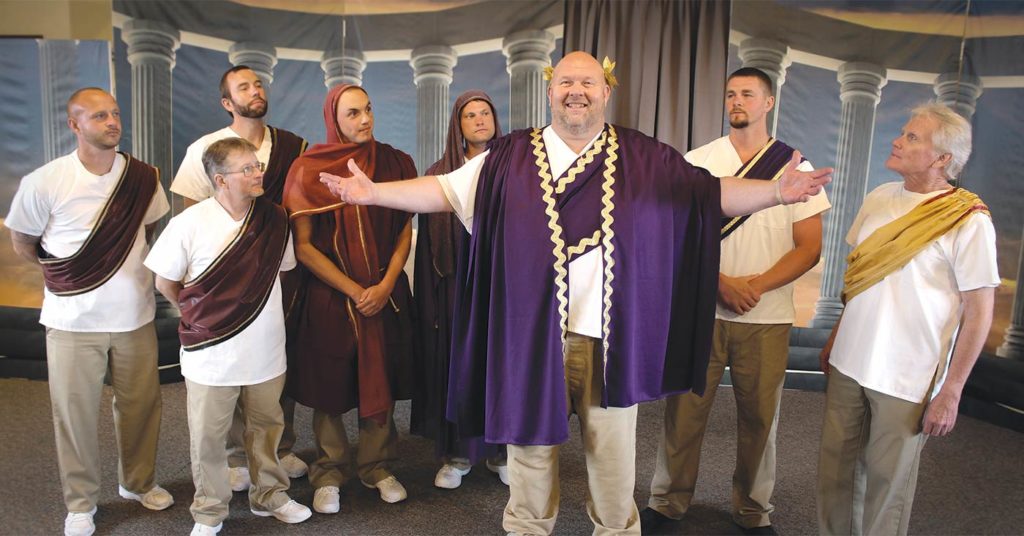 The Shakespeare Behind Bars production of ‘Julius Caesar’ in 2017. Photo by Holly Stone

I imagine that Shakespeare’s troupe of actors was full of men like Nick Bottom, the comically charismatic weaver in a local production of “A Midsummer Night’s Dream.” Bottom is an ambitious actor. He yearns to play every role in the play-within-a-play that serves as the comic core of this delightful story. If he had is way, Bottom would cast himself as a gallant lover, a beautiful lady and a roaring lion — all in the same play.

By the time of “Midsummer Night’s Dream,” Shakespeare’s men were likely competing heartily for every role. And perhaps that surfeit of actors is what inspired Shakespeare to weave the greatest romantic tangle in the history of comedy.

This year marks the 23rd season of Shakespeare Behind Bars at the Luther Luckett Correctional Complex in La Grange. The key mission of SBB is to “offer theatrical encounters with personal and social issues to the incarcerated, allowing them to develop life skills that will ensure their successful reintegration into society.”

By that measure, SBB seems to be a resounding success and a tribute to the leadership and staff at LLCC, who support and sustain the program (Scott Jordan, Helen Long, Jessie Ferguson and Jesse Stack) and the vision of the Kentucky’s Department of Corrections. A table in the production playbill makes a strong argument for programs like this. At the national level, recidivism rates average 67.8 percent. In Kentucky, the recidivism rate is 40.7 percent. The recidivism rate among those who have participated in Shakespeare Behind Bars over the last 23 years is 6 percent.

From a theatrical standpoint, this production was also a resounding success. The SBB troupe spends a year reading and thinking about and rehearsing its productions. Unlike most conventional theaters, casting decisions are made by the members of the acting troupe.

And the result this year was a sharp, lucid production that fluently captured the ideas, the emotions and the comic aspects of a play that seldom receives such a detailed production.

The action is spurred by the impending nuptials of an Athenian Duke, Theseus (Hal Cobb) and his captured Amazon queen, the willful Hippolyta (Charles Young). Theseus presides over his domain with a humane kindness and wit — and Cobb voiced his lofty rhetoric with power and grace. Young conveyed Hippolyta’s grumpy gravitas with humor and conviction.

A cloud hovers over the nuptial celebration because Egeus (Chad Meadows) is furious that his daughter Hermia (Robert O’Brien) wants to break her engagement to Demetrius (William Whitehouse) and instead marry Lysander (Timothy Falk). Meanwhile, Helena (Andrew Noe) is smitten with Demetrius — who cares nothing for her.

Theseus does what any rational politician would do. He delays making a decision and sends everyone off to think about it… And when Hermia and Lysander decide to flee into the woods, the action moves to a land of fairies and spirits.

In that strange realm, Oberon (John Sheesley) presides. He, too, has a strained relationship with his Queen, Titania (Robert Divine). Oberon, of course, is attended by the “shrewd and knavish” Puck (Thomas Walker). Titania’s retainers include Peaseblossom (Michael Webb), Mustardseed (Joel Otis), Mote (Roderick Blincoe), Cobweb (James Prichard) and a Spirit (Clifford Stoup).

When the young folks wander in Oberon’s land of magic, all kinds of shenanigans ensue. Magic potions start flowing — and as a series of romantic confusions ensues, the cast members shine. Falk plays Lysander with earnest, innocent charm. As Demetrius, Whitehouse treads a complex emotional path of resentment to love and reconciliation. And O’Brien and Noe are fantastic as the young ingenues whose romantic aspirations are first thwarted then resolved.

Well, that’s the other part of the story.

As if the romantic comedy weren’t enough, Shakespeare also gives us arguably the finest play-within-a-play ever written.

Every comic actor in the world probably craves the opportunity to play these roles — and this sextet ran with the roles. Guenthner was a sly, strutting, histrionic Bottom. Cohen corralled his unruly group with just the right tone — and when they presented their work to the Royals (over the objection of Philostrate, Theseus’ master of revels, played by Solomon Evans) the house rewarded their work with cheers.

The production was directed by Matt Wallace and facilitated by Keith McGill. Donna Lawrence-Downs designed costumes. Original music and sound effects were created by Thomas Suleski.

Next year, the company plans to present “King Lear.” For information, go to shakespearebehindbars.org.