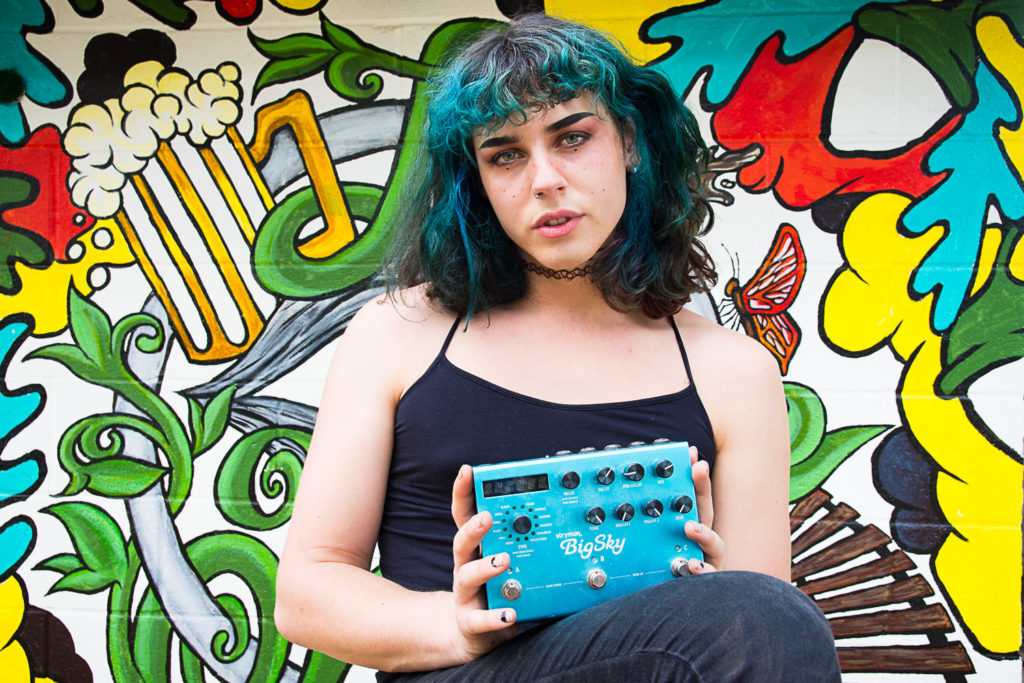 All kinds of styles and personalities make up Louisville’s music scene, which is mirrored through an array of instrument and gear choices. We asked five local musicians to each choose an important piece of equipment and explain how they use it to accomplish their sound.

Aaron West, who you might recognize as the violin player of Quiet Hollers, is a multi-instrumentalist who employs magnetic tapes in his solo projects to create musique concrète — a form of music made from recorded sounds. West uses reel-to-reel tape players, cassettes and eight-track players to record and play the music. A myriad of techniques is used to manipulate the tape, including loops, delay and varying the tape’s speed. The tactile qualities of tape leave a lot of the action to chance, but, once the sounds are arranged, they provide a bedrock for his ambient solo work. He says his equipment is…

“…all really old and doesn’t always work properly. Especially if you are taking an eight-track and putting your own loop in it. Sometimes it’s not spooled correctly, so it has some crazy sounds from it that you never would have expected. It’s music by chance — sometimes the equipment won’t even work, and you try and figure out something different. [There’s] a lot of open ends with it and it’s fun that way.” •

Alyc Diaz, whose stage name is Vyva Melinkolya, plays a goth style of shoegaze that features dense layers of reverb and distortion. To achieve this, Diaz uses a Strymon BigSky, a multilayer reverb pedal. It has 12 different types of reverbs that can give any instrument sounds ranging from a slight echo to a cavernous thunder.

“If I was stranded with only one, it would definitely be this one, because, aside from reverb, it does modulation, which gets a lot of shit covered. I think I could pull off some parts of my sound with another reverb pedal, or a bunch of reverb pedals, but this is the pedal over the past four years that I have developed my sound with, so I really can’t imagine using anything else. [With the BigSky] I can emulate all the music I’m derivative from, aside which requires distortion, it’s all here. I could spend hours with this pedal and not get bored, which I’ve been doing for years now almost daily.”

Allison Cross is the trombone player in the band Billy Goat Strut Revue. In addition, she DJs and runs a music therapy company, Restorative Sound. Not only has her trombone allowed her to play in bands that cut across genres, but it also has presented her with opportunities to take part in offbeat projects in the past 20 years.

“The main band I have is Billy Goat Strut Revue, but I’ve had the pleasure of playing and recording with a bunch of folks in town. As far as bands go, Your Friendly Neighborhood Big Band was a hit. Your Friendly Neighborhood Big Band recorded some film scores for some silent films back in the day. The Afro Physicists, I was in for a short amount of time. I’ve recorded with Justin Lewis, Otis Junior, the 23 String Band. I just did a project with Prjctr. I’ve done quite a bit of theater, like playing trombone down in the pit while a live performance is going on. It’s developed in a great way, and I’m definitely still thankful to still be able to play. I feel like if I stop, I won’t get hired, so I might as well continue as much as possible.”

Axel Roley is a hip-hop beatmaker who uses an Akai MPD218 sampler to arrange his music. From a vinyl record player, he pulls his sounds, and then uses the pads on the Akai to assemble the music. He programs the pads to be played like how a painter uses different shades of color to accent a painting.

“[Akais] are more tangible for chopping up different samples. You can take bits and pieces and whip it in your own way, and create your own style. [The whole process] just all comes up to it. I’ll just be in the moment — it all sounds good. There’s a spark in my head, and I can just make a sequence, and I’ll just break it in like that.”

Scott Carney is the guitar player and vocalist of the band Wax Fang, but he also uses a theremin to add an element of surprise in his music. A theremin is an electronic instrument that can be manipulated by moving a hand in the air around one or two metal antennas that control pitch and volume. Originally devised as an alarm system, theremins have evolved into a musical instrument with orchestral potential, but Carney has a different approach.

“I don’t profess to play the theremin. I make it squeal. There’s a difference. I am not that advanced with it. For me, the theremin is a Pandora’s box of wild chaotic noise. I like it because it’s a cool sound — it’s a novel sound. For what I use it for, it adds a lot of color to rock and roll. I just like it’s something you can set up and wave your hand in front of, run it through some pedals, and it makes some interesting magic happen.”