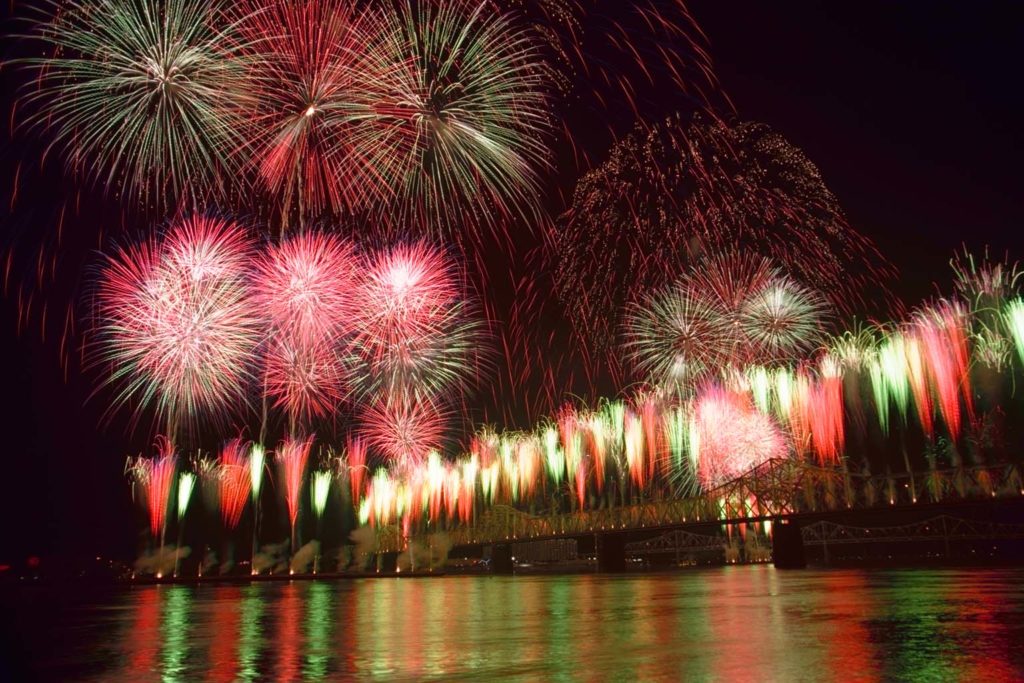 Thunder Over Louisville fireworks during the Kentucky Derby Festival.
Photo by 7263255

The evening sky lit up with fireworks during Thunder Over Louisville. Thousands of eyes watched stars and streams blast into existence in what has become the high-profile prelude to the Kentucky Derby.

But was that same amazing display hazardous to the health of Thunder fans?

The answer is as gray as the sky after a Zambelli’s display.

A spokesman for the Louisville Metro Air Pollution Control District, or APCD, said Thunder alone is not enough to move the needles on air quality readings, which have been steadily improving here since the ‘70s. “It’s not your grandfather’s air,” said Tom Nord, communications specialist for the APCD.

But others raise red flags about air pollution, especially during other holidays and festivals that employ fireworks. And still others say the science behind fireworks and pollution isn’t settled.

Meanwhile, the Fourth of July, with more fireworks displays than Thunder, approaches. And as Courier Journal reported last year, those pyrotechnics created smoke that lasted into the next day, with a sharp spike in the smallest particulate pollution starting at 9 p.m.

Particulate matter, also known as particle pollution is a complex mixture of extremely small particles and liquid droplets that get into the air. According to the U.S. Environmental Protection Agency, these particles, when inhaled, can affect the heart and lungs and cause serious health effects.

Gary Hoyle, acting chair of the Department of Environmental and Occupational Health Sciences at the UofL, said many unanswered questions remain about fireworks’ impact on air quality. “The science is still out on that question,” he said.

Studies that address fireworks do show there are spikes and exceedances of PM standards, he said, but the findings also contain many unknowns: Where were the monitoring stations in relation to where the rockets were set off? At what levels were the explosions dispersed? Were people at risk elsewhere in the area or just at the scene of the show?

Overall, “it’s something that hasn’t been well studied,” Hoyle said.

“If I were going to one (a fireworks show), I would want to be upwind to minimize my exposure,” Hoyle said.

Fireworks can contain some nasty stuff. In fact, LifeScience, an online news site for science and technology, described some of the ingredients as “bizarre.” The color of those displays depends on the metals used: Aluminum, copper, lithium and strontium salts, barium and calcium could be in the mix.

According to hourly readings at the APCD’s monitoring stations from April 20 to 22 — the weekend of Thunder —  which LEO obtained through an open records request, there was no 24-hour period where the average particulate matter reading exceeded 35 micrograms per cubic meter (mg/cm), the threshold for acceptable air quality.

“We didn’t see anything crazy this year,” Nord said. “There’s always the possibility something will show up, but we didn’t see any exceedances or spikes.”

There were a couple hours at some of the seven monitoring stations where an hourly reading peaked over 35 mg/cm, but the average reading for each of the three days remained in compliance.

Not so surprising, Nord said. Weather conditions in April tend to be cooler, unlike summer when warmer, dryer weather is ripe for pollution.

A combination of weather conditions and “sheer volume” of fireworks will make July 4 more problematic for air quality, according to Nord.

“Thunder is big,” he said, “but if you look at all of Kentuckiana, it’s an isolated event in one part of town, and we have found that because it’s not like summer, it happens and tends to disperse.”

Fireworks aside, the pollution readings from Thunder reflect a positive trend in local pollution levels.

There has been a positive particulate matter trend since 2010, Nord said, with one monthly exceedance reported since 2015. He also said most historic trends of pollution, except for ozone, have been sharply curtailed here.

He chalks up the improvement to several factors, including stricter emissions standards for cars and especially Louisville Gas & Electric’s decision to convert its Cane Run power plant to run on natural gas, ending six decades of coal-fired generation at the facility.

That alone, Nord said, “took tons of particulate matter out of the air.”

Heather Werheim, American Lung Association advocacy director for Kentucky and Tennessee, said that particle matter pollution has lessened over the past year. Louisville Metro (including Jefferson County, Elizabethtown and Madison, Indiana) ranked 21st on the ALA’s list of the top 25 most-polluted metropolitan statistical areas for particulate matter in its 2018 State of the Air report.

(Nord said the report isn’t as bad as it seems, noting that only the top 10-12 areas on the list are out of compliance. The rest are the worst of those areas in compliance.)

Meanwhile, ozone pollution remains a stubborn problem for the area — and much of the country — as increasingly hot weather from spring and fall ripens conditions for the pollutant.

Werheim lauded the work done to make Louisville less susceptible to air pollution. “We have a mayor who really has done a lot to help with that,” she said. “We have a lot of organizations and partners that help to improve the tree line in Louisville, to make sure we have cleaner air to breathe.”

She made it clear that ALA takes no position on Thunder, Fourth of July or celebrations or other festivals where fireworks displays are planned. “If someone called us to ask,” Werheim said, “we would probably tell them that’s not the right environment to be in with the health problems they face.”