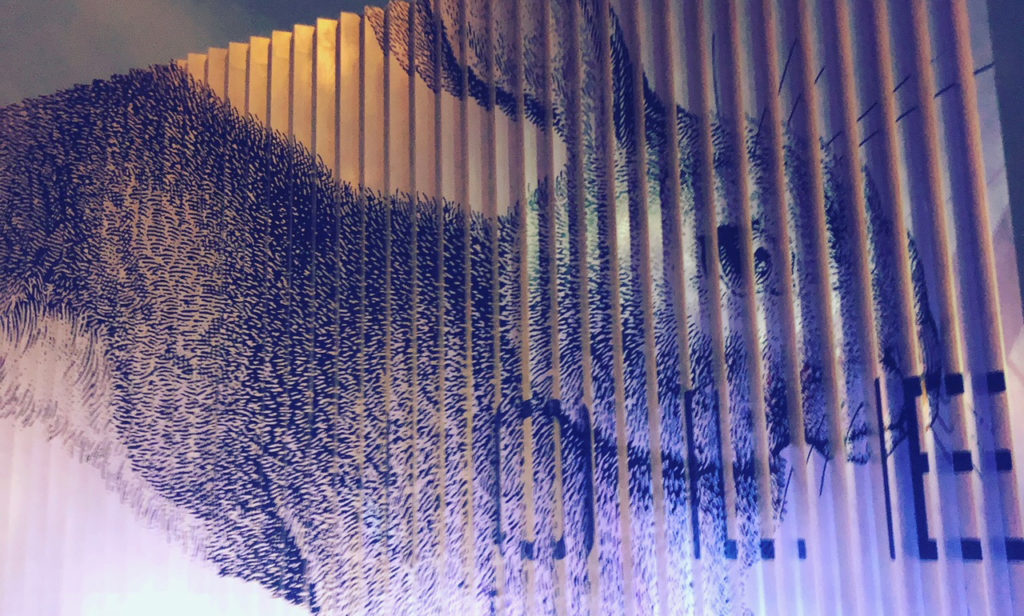 I’m not that original, so my initial idea was to do a Hunter S. Thompson gonzo-style take on my Derby-related assignment for the LEO this year, the Rabbit Hole Distillery Grand Opening. I mean, it’s not really a good look to get banned from a venue three blocks from your home, but I was willing to do it in service of your reading experience (and my total lack of couth when it comes to an open bar). Unfortch, the Rabbit Hole party was more decadent than depraved.

It was sprinkling that night, so my friend drove us the few blocks in her Hip-Mom SUV. The fine folks at King Sixteen events, the team behind the party, set the tone for the evening with complimentary valet. The distillery is located on Jefferson Street between Clay and Shelby streets, but don’t try dropping in on it just yet, as it doesn’t officially open to the public until June. If you’ve been to Galaxie any time in the last year or so, you’ve likely seen the distillery going up across the Green Building parking lot. It was designed by award-winning architect Doug Pierson out of North Carolina. Lots of glass and other cool architectural design flares.

The party was sponsored by Porsche, and it had a few cars out front as décor. There was some guy standing near the cars who kind of looked like he was there to guard them, which meant I simply walked by, instead of draping myself across the hood of every single one of those vehicles to flick it up for Instagram.

Once we entered the party, we were directed to our left where the concierge area was serving as a mint julep bar. I drink about one mint julep a year, and this was a good one to hit my quota. The mint was freshy-fresh, the ice crushy-crushed, and the metal cup chilly-chill.

Juleps in hand, we made our way deeper into the distillery. There are was a trio of topless models, with their breasts and chests covered in pieces of silver, while rocking white jockey pants and black riding boots. I heard at some point in the night, that on the left side of the distillery all the ingredients for Rabbit Hole’s bourbon are brought together, and then it’s transported to the right side of the distillery for fermentation.

I’ve been on a couple of distillery tours, but I am by no means a bourbon expert. So, what I’ll say about Rabbit Hole is that everything was very shiny and new. There was almost this kind of, “What if Willy Wonka’s Chocolate Factory was 21-plus and served bourbon and was grown and sexy?” vibe going on at Rabbit Hole.

We took the elevator up the first floor, and then walked up a set of stairs to a mezzanine bar, an area Rabbit Hole’s calling “The Overlook” because you get that dramatic James Bond view of everything happening above and below you. A woman was serving up flutes of French 75s. There were flower arrangements on every table and fragrance diffusers with “curated scents” created especially for the evening by the Myrrhmaids.

The third-floor event space is glass almost all the way around giving way to spectacular views of the city. Party revelers filled the balcony, jacket-less in the balmy night air. The LED display, the largest ever in a distillery according the media alert for the party, reduced to performers on stage to silhouettes (an effect I was into).

My friend and I made it a point to try every cocktail. The famous Death & Co. out of New York City is credited with creating the menu. The “Island Staycation” was our favorite, “coconut flake infused Rabbit Hole gin with lime and cucumber juice and coconut water syrup.” And the “Herb Your Enthusiasm” cocktail was fun. You had to order it from a specific bartender at the end of the bar who had garlands of fresh herbs hanging over his head. You told him which spirit you wanted and which herb and clipped some fresh for your cocktail. I went with cilantro and gin.

The dinner — which we didn’t attend — was catered by Wiltshire, which is always delish, and there were also passed apps throughout the evening. I probably ate an entire tray of meatballs by myself, and my friend spoke highly of the mini-biscuit with pimiento cheese and country ham. I ran into Emily Hagedorn, from Yelp, and we all swapped our Herb Your Enthusiasm cocktails. I chatted with Olivia Griffin, owner of the Limbo, in line for the bar. She told me about their new patio opening and their all-woman lineup of DJs for night, so my friend and I emerged from our tumble down the Rabbit Hole and popped up in Tiki town where I ran into a pink and palm frond print curtain that looked almost identical to my outfit.