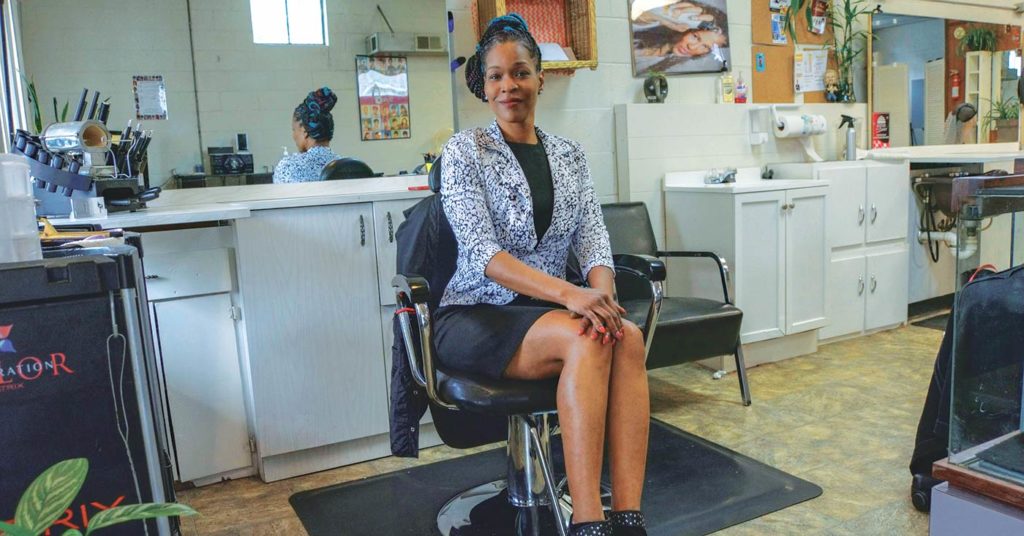 Sonda, owner of Beauty Habits and a Parkland resident
May 3, 2018

“The house that I live in is my great grandmother’s house. It’s off 34th and Greenwood. She was a hairstylist. Between her and Mr. Lee, we don’t know who did the most curls back in the day. I grew up with that because her salon was always at the back of the house, which is now my laundry room. That’s where she did hair. Guess where I was going? Over my grandmother’s house. Guess what I was doing? I was holding them rollers. When I was growing up, one of my mom’s friend’s mother was Lillian Coiffure. She had a salon on 23rd and Maple called Lillian Coiffure’s. Now, Lillian is where a lot of your main names did their apprenticeship. All of them did their apprenticeship with Ms. Lillian. I was probably around 9 or 10, going down there. That’s where I was after school and after work. By the time I was ten, I was the roller wrap queen. If I couldn’t do nothing else, I could roll your hair up. Ms. Lillian would put me on a timer and tell me that I had 15 minutes to roll someone’s hair. I was trained.

When I got out of high school, I had got accepted into Spelman [College]. I went to school and let my GPA drop because I had a boyfriend. I caught a felony behind him and everything. God rest his soul. I could have went to Morris Brown to get into Spelman. I wanted to be a chemical engineer. I was still in the bathroom doing girls’ hair and makeup after school. I had a guy friend who convinced me to go to hair school. Those pieces led together, and I’ve been a licensed hair stylist for over 20-something years.

I got caught up with my boyfriend, and he was big into the drug game. I was just doing me from the ages of 15 to 22. I got pregnant with my first son. When I became a mom, I knew that I had to do something and get out of the streets. I had my license for about three years and never did anything with it because I was in the streets. The streets made plenty of money. I had my first son and started to doing hair again. I was working for corporations. Then, I had my second son at 26 and realized that it was really time to be grown. At that time, I had the struggles of being 26 years old with two kids, one paycheck, and their fathers were in the penitentiary. I worked every day, minded my business and raised my kids. I was, and still am, a dedicated mom. I worked, raised my kids, and did all of the sports with them.

I was a manager at SuperCuts, and a barber that I knew had passed away, and his wife was going to let his shop go. One of my apprentices lived down the street from the shop and learned that same information. She took her test and bought that salon. She got it, so it was not for me. Then, there was another salon whose owner had gotten sick and passed away. I drove by the shop and seen someone cleaning it. I walked in, and it was my best friend, my son’s godmother. God blessed her with that. I couldn’t feel no type of way because I’ve been telling this girl to get in this hair game for a long time. She had went from nursing to doing hair. So, at that time, I just prayed on it. One day, I rode past this building and there was lady taping up this sign that read: ‘Everything Must Go.’ I came in here and talked to the lady for about an hour. I told her that I wanted the building. She called the landlord, and he came over. He asked me how much money I had, and I only had $60. My homegirl, out in the car, had $20. I gave him $80, and he gave me a lease. When I tell you that was nothing but God. God will push you where he knows you need to be.

My first three years in here, this building had been through it. The first year, I was here by myself, and I needed to get some people in here. The second year, the roof was leaking, and my plants were catching a lot of water. Then, I came in one day and every single pipe busted in the winter. We pumped out over 20,000 gallons of water. Every pipe had burst. I had to go in and replace everything. After dealing with that, the heat decided to go out, in the winter. We had to come in two hours before appointments to start the space heaters. It was a struggle. My landlord ended up replacing the water heater, furnace, the ceiling, the roof and everything. I had to start over three times in this building.

The Lord will test you, and a lot of people were telling me that he was telling me that this wasn’t for me. I would say that maybe he’s testing me to see how much I wanted this. He’s given me many chances to throw in the towel, but I really wanted this. My faith in God keeps me strong in my journey, and my faith in life won’t let me give up.

My name, Beauty Habits, comes from me believing in creating habits that make you feel beautiful. Beauty starts on the inside. I can put any hairstyle on you, but if you don’t feel beautiful inside, you’re not going to feel like anything on the outside. When you come in here, you’re getting compliments and hugs. Sometimes, there’s something to talk. I don’t want that spirit over your head while I’m doing your hair because it’s gonna come out.

My favorite part about my job is making people feel better about themselves. That’s a part of my legacy. I want people to believe in themselves. My son says that I’ll motivate anybody through anything.

I want people to believe in themselves and push through it. Like I said, I was a convicted felon. On my 18th birthday, I got that lucky ‘F’ on my report card. In some people’s heads, as an 18-year-old black women, I couldn’t get my hair license. Yes, I can and did, with this appeal and a hearing! They told me that I could never work in a corporate setting. Well, I did that, and I worked in management. They told me that I would never go back to college. I have a business degree. The doctor told me that I couldn’t have children. I’ve got two boys and a stepson. I also have a granddaughter and a slew of nieces and nephews. You don’t know what my God knows. Every time someone told me that I couldn’t be more, I’ve been more.” •

West of Ninth is a photography blog, westofninth.com, by Russell residents, Walt and Shae Smith, focusing on all nine neighborhoods in West Louisville. Armed with a Nikon DSLR, a recorder and the ability to never meet a stranger, their goal is to shed light on the attributes that make West of Ninth the greatest.