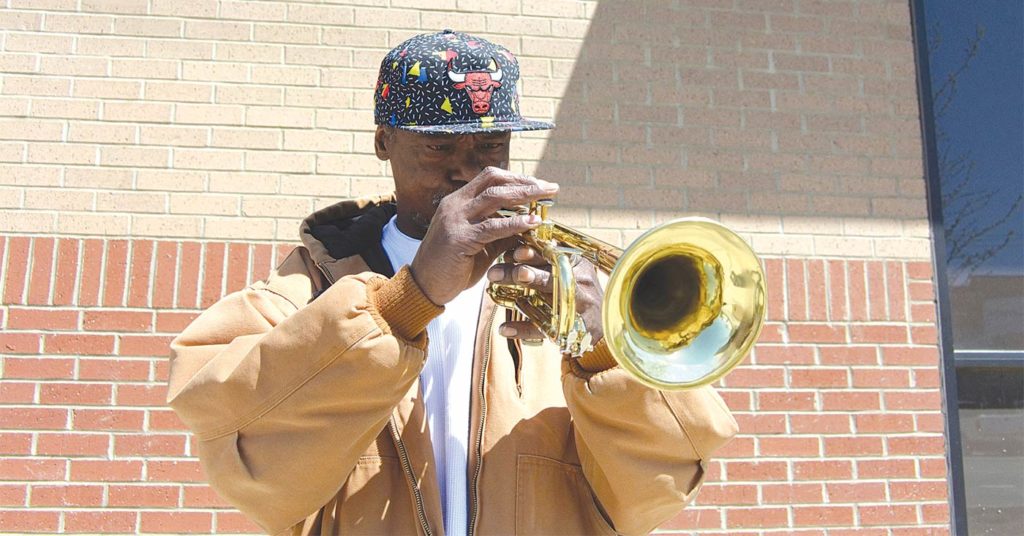 “I’ll be 60 this year. I was raised up in a time where there was a lot of jazz being played. So, jazz led me to play the trumpet and other instruments. When I was 5 years old, I seen jazz musicians on TV. Watching them make the sounds with the instruments, using their hands, I thought it was magic. I love how it always fits the scenery that you might be in when you hear it. Jazz just crowns any moment.

My music inspires me. I’m trying to start a band. I went a long time without playing the trumpet, so I’m really just getting back. They call it getting your lip back but I’ve been playing for a long time. I started out on piano but this is the instrument that I stuck with. I practiced every day. It was knack because in 18 months I was playing in a professional band. It was complicated jazz because I was playing by ear and by heart.

I’m facing a lot of struggles because I have to maintain my life. I can’t put a lot of energy and source finding into my music because this isn’t really a jazz town. This used to be a jazz town. There was world-class jazz musicians that came here and played at this place called The Jazz Factory. World-class jazz musicians appeared every week. Now, they’re not doing that anymore.

“Understanding, communication, and trust are the keys to a good relationship.” —Von

“It’s hard because we all have our problems but you just have to put that trust out there on the table.” —Tia

“We met up here. It was like love at first sight, for real. Twelve years and three kids later, I’m ready to get married.

“This might be the last Thunder for us. I grew up here. Thunder Over Louisville has always been up here, it’s Beecher Terrace Day. That’s what we call it.” —Tia

“Once they tear it down, it’s over. Well, when they get everything reconstructed, ain’t no telling what it’s gonna be when you come back here. It’s over. We’re gonna be forced to go down there. For us black folks, we ain’t gonna wanna go anywhere else, it’s tradition. Damn, that’s cold. It’s the last one. I started not to come and was just gonna stay home and sit on the couch and watch TV. I’m glad I came out here.

“We need more love down here. Down here, it’s ridiculous. I mean, I grew up wild but now, they need love. The city’s tore up.” —Von

“The West End needs more community centers, unity, and more support for each other.” —Tia

West of Ninth is a photography blog, westofninth.com, by Russell residents, Walt and Shae Smith, focusing on all nine neighborhoods in West Louisville. Armed with a Nikon DSLR, a recorder and the ability to never meet a stranger, their goal is to shed light on the attributes that make West of Ninth the greatest.