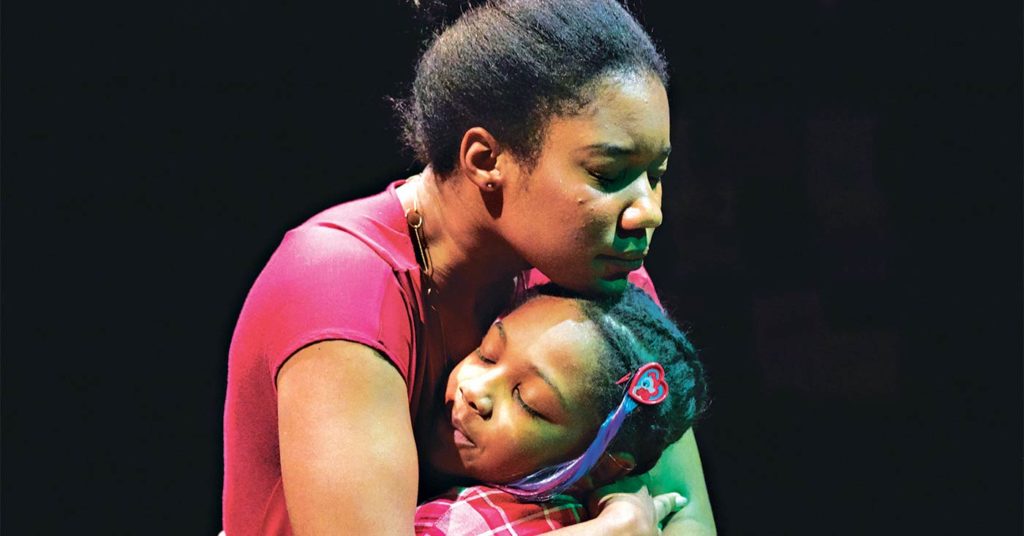 Alaina Kai and Cadence Diggs in ‘KIDS, THEY SAY THE DARNDEST THINGS’ by Safietou Gueve, for the 2018 New Voices Festival. Photo by Bill Brymer

A parent-teacher conference is the subject of Safietou Gueve’s 10-minute play “Kids, They Say the Darndest Things,” directed by Janelle R. Dunn.” The teacher, Mrs. Alexander (Rigel Harris), tells the mom, Erin (Alaina Kai) that young Lola (Cadence Diggs) is an excellent student. Although Lola is having problems writing the letter “E,” her recent paper on the topic “What’s your wish?” was the best in the class.

At Mrs. Alexander’s invitation, Erin reads the paper aloud: At first, it’s Erin reading solo. “I wish I had a bird that could sing me pretty songs.” Then the soft voice of Lola joins in, adding a sweet resonance to the litany. And, finally, Erin’s voice drops out, leaving Lola to utter the final words: “I wish I was white, like the people I see on TV.”

When I saw the play, last week at the 13th Annual New Voices Young Playwrights Festival at Actors Theatre of Louisville, I heard a startled gasp from the audience. It’s a powerful piece of writing from a Gueve, who is a junior at Ballard High School. It’s also a superbly-crafted piece of theater-making that heightens the impact and sets up the potent clash that follows between a white teacher so proud of Lola’s spelling and punctuation that she can’t understand the African-American mother’s shock and dismay.

New Voices is but one of ATL’s formidable array of education and outreach initiatives — and year after year it showcases the talent and imagination of area students, the fabulous commitment of the young theater people in ATL’s Professional Training Company, and the devotion and time that area teachers bring to the young artists in their charge.

There were eight excellent plays on last week’s bill (selected from nearly 1,000 submissions). Sinister gamesmanship (and a pair of dysfunctional judges) shaped the outcome of a wild spelling bee in “Spell It Out,” by Breãna Lopez (junior, Pleasure Ridge Park High).

In “Where To From Here,” by Justin M. Holder-Jones (senior, Valley High), directed by Jeff Rodgers, a young man has the basketball skills to attend a top school away from home — but he fears abandoning his familial responsibilities — and his young sister. In their debate — punctuated by the dribbling of a basketball, it turns out the sister is wise beyond her years (and a good shot, as well).

An uprising of witches challenges the reign of an infantile joust-obsessed ruler in “The Great Battle of Morgan and Grump: A Quest for Witches’ Rights,” a witty, tightly-argued play by Aiden Phillips (junior, New Albany High School), directed by Joan Sergay.

Charlotte Meeley (Grade 6, J. Graham Brown School) mashes up Robin Hood and Shakespeare’s “Romeo and Juliet” in the opening lines of “The Sandwich and the Rock,” directed by Zoe Rosenfeld. “Two objects, both alike in sentience, in Sherwood Forest, where we lay our scene.” Then, Meeley unleashes a torrent of florid language (including an assortment of rhymed couplets) as she lays out an unlikely romance between the sentient objects of the title.

In “Ham and Cheese,” by Joshua Geist (senior, Marion C. Moore High), directed by Abigail Miskowiec, a disconnected couple look back on their past (especially the memorable night of a long-ago Guns N’ Roses concert) and suddenly kindle new sort of romance through the comforts of a simple meal.

“Sharing In Solitary,” by Madalyn Hankins (sophomore, Floyd Central High), directed by Betsy Anne Huggins, is a wildly-ambitious musical fairy tale of a journey that starts in a prison cell and eventually triumphs over giants, crosses the Bridge of Friendship and other obstacles to reach the Castle of Sharing — but only when the comrades on this fanciful journey have learned important lessons.

This year’s New Voices Festival is over, alas. But there are a number of new play festivals throughout the year in Louisville. They are an excellent way to find your way into Louisville’s abundant and vibrant theater scene.

In a park near you ‘A Midsummer Night’s Dream’

Kentucky Shakespeare’s signature event — the Shakespeare Festival in Central Park — doesn’t open until May 30. But from now through May 19, the troupe’s Shakespeare in the Parks series is touring a fantastic production of “A Midsummer Night’s Dream” around the area. Directed by Amy Attaway, it’s an ingenious, fast-paced affair that runs under 90 minutes and uses six actors, all of whom are playing at least three parts.

I caught two performances last week — amidst the stately greenery at Locust Grove and a few yards away from basketball courts at Victory Park. It was a delicious treat both times. It’s a tale of romantic intrigue and magic potions. And of course there is a play-within-a-play, produced by the (unintentionally) funniest troupe of amateur thespians in the history of theater.

It’s worth attending just to see this cast shape-shifting from role to role. Great performances by all — and it’s evident that this troupe — which has already performed the play more than a dozen times (frequently twice in a day) is reveling in the fun. It’s a true ensemble performance at an extraordinarily high level — free-flowing and confident.

And because of the intense multiple casting, it highlights the varied skills of the performers — Shaleen Cholera, Tamara Dearing, Charity Means, Colin Nesmith, Neill Robertson, Sabrina Spalding (and on some dates Hallie Dizdarevic). If you love good acting and want to see masters of the craft…

The production is on hiatus from now through Derby, but picks up again on Sunday, May 6. •

‘A Midsummer Night’s Dream’
Through May 19
Various locations
kyshakespeare.com
All performances are free
Times vary