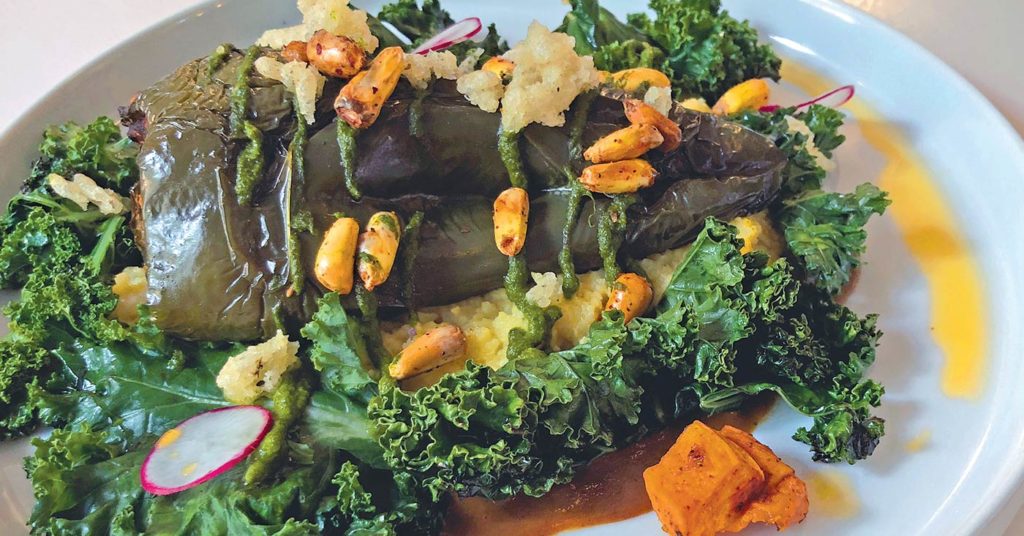 It is so tempting to start with a joke about a restaurant named Naïve, but I’m just going to resist temptation and not even go there. Seriously, the ethos behind the name of this charming, new spot on the edge of Butchertown is so sweet that it deserves to stand on its own:

“We see the world as a place of hope,” Naïve’s owners write on the restaurant website. “Maybe that’s naive. But maybe it’s one of our greatest strengths. Because we’re not afraid to think big, with no preconceived notions. With a connection to what’s real, from the food we eat to the relationships we nourish.”

It’s hard to miss Naïve’s gray brick building: Tucked into the angle at the corner of Wenzel and Washington streets, its angular footprint resembles a tiny Flatiron building.

The owners, husband-and-wife team of Catherine Mac Dowall and Michael Kerrigan, spent much of the fall and winter converting the property, once residential, into a sleek, stylish restaurant and bar space. The dining room’s high ceilings and big front windows admit plenty of light to further brighten the glossy, white tones and flotilla of hanging lamps that fill the open space. A wacky variety of seating and tables includes backless stools, comfy padded chairs and a tall-backed banquette, and sturdy wooden tables and tiny, triangular bar tables.

There are a lot of vegetarian, vegan and gluten-free dishes on a bill of fare that’s labeled “fast-casual, plant-based, focused on a vegetarian lifestyle, with meat options and some healthy indulgences, too,” so carnivores can choose sustainable and organic meat and seafood dishes.

The menu is at least three-fourths local and organic, the owners say. It’s subdivided into bar bites, toast dishes, small plates, large plates and bowls, with about 18 items that range in price from $3 (for spiced crispy Peruvian “inside-out” popcorn) to $16 on the top end (for a farmer’s bowl of ancient grains topped with turmeric roast chicken, spring veggies and more). Want extra protein? Drop a Peruvian chicken breast, lamb kofta, sunnyside egg or shrimp on your dish for an extra $2 to $6.

The bar menu is also intriguing, based largely on organic ingredients and generally affordable, with short lists of wine, beer and liquor, plus a half-dozen house cocktails. I wasn’t into day drinking during a recent lunch visit, but got by nicely with a Strawberry shrub ($4), a cooling, nonalcoholic, rhubarb-strawberry drink garnished with a cucumber slice.

Service is fast-casual: Order at the semicircular bar in the middle of the room, pay and take a number to your table to wait for your food to come. When it arrives, I’m pretty sure you’re going to like it, and chances are it won’t be quite like anything you’ve ever had before. Executive Chef Matthew Alan Henry and his team in the kitchen aren’t afraid to try, as the original Japanese Iron Chef used to say: “ … new original cuisines, which could be called true artistic creations.”

Or consider herb-roasted, locally-grown roasted chicken ($16), accompanied not with dumplings or fries but mushroom bread pudding and root-vegetable puree.

“Inside-out popcorn” ($3) was simple and surprisingly addictive. Large Peruvian corn kernels had been fried until shatteringly crisp, then tossed with light spice and served in a bowl as a bar snack.

Sweet corn arepas ($9) were more crunchy than the Salvadorean original, but that didn’t matter because they were good that way. Four quarters from a thin cornbread round were split and stuffed with fermented black beans and cotija cheese, dressed with red cabbage, thin-sliced radishes, onions and dark-green dabs of avocado crema.

Israeli chickpea tagine ($12) featured a generous portion of al dente chickpeas in a thick, spicy, tomato-based broth, kicked up with diced onion, green pepper and sweet potato, and garnished with radish slices and fresh mint leaves that added an enticing pop to the flavor.

Mole poblano relleno ($13) was fresher and lighter than the South-of-the-border version, being baked bare rather than cloaked in a soft, fried batter. It was piquant, not overly fiery, stuffed with diced roasted sweet potatoes and perched on a bed of savory, textured cheese grits on a thick brown sauce. It was garnished with inside-out popcorn and large, tender, citrus-scented kale leaves.

Our tab for two rose up to $43.46 plus a $10 tip, on the high side for lunch, but for tasty, creative fare made from healthy local and sustainable ingredients, I’m willing to pony up. •

Noise level: Hard edges and a talkative crowd make for a shrill environment that can hamper conversation at its peaks. (Average sound level 74-82 dB, with occasional spikes to 91 when someone forgets to use their indoor voice.)

Accessibility: Difficult for wheelchair users. A single step bars the front door. A level entrance at the rear is hampered by materials stored inside and a long sidewalk route to the doorway.