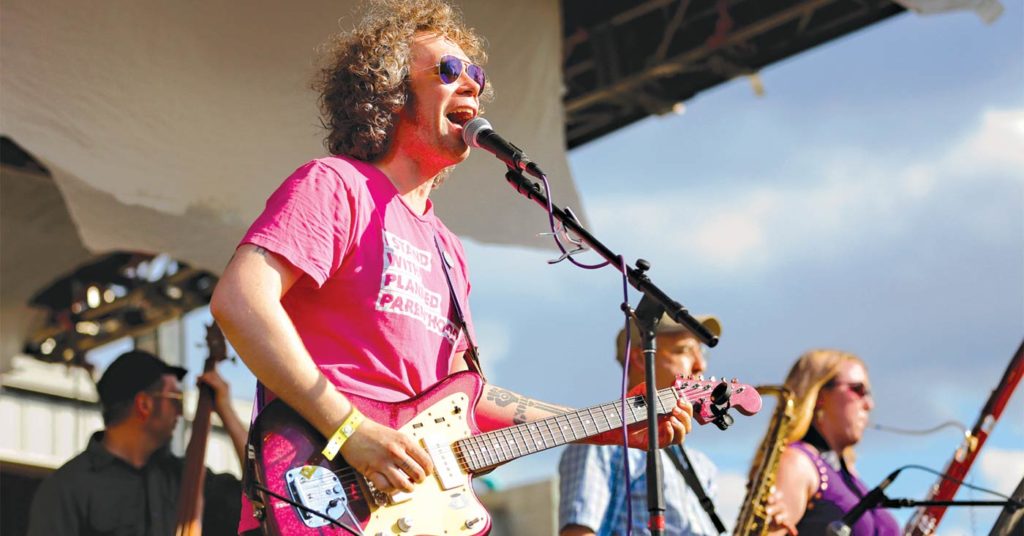 We’ve shed the dim light of our particularly cold winter, and the summer has never seemed more welcome. And with those warm temperatures and Kentucky humidity comes the hum of music festival season, which brings great musicians to Louisville, while highlighting the exemplary talent that we have homegrown right here. Whether it’s pop or metal, family-friendly or oriented more to adults, there’s something for everyone going on this season.

Poorcastle Festival
Apocalypse Brew Works
July 6-8
A response to the corporatization of Forecastle, which primarily books big-name national acts, Poorcastle is a Festivus for the rest of us, a home for the little guy, so to speak. But don’t take that as an insult to the talent involved, as some of the best and brightest acts in the city — from hip-hop to indie and beyond — are featured every year. Highlights for this year’s lineup include Touch AC, Rmllw2llz, GRLwood and Julie of the Wolves, and great beer provided by Apocalypse Brew Works, the annual hosts of the event.

Forecastle Festival
Waterfront Park
July 13-15
What started off as a small, locally-run fest in Tyler Park has blossomed into one of the biggest festivals in the region. Held mid-July every year, Forecastle Festival is a three-day event that features some of the biggest, brightest musical acts running. This year’s event is set to include big-name acts such as Chris Stapleton, Arcade Fire, Modest Mouse, Courtney Barnett, Jason Isbell and Vic Mensa, as well as local luminaries like White Reaper, Cave DWLR and James Lindsay.

Blues, Brews & BBQ Fest
Louisville Water Tower Park
July 20-21
Getting the blues is never quite so tasty as it is at the Blues, Brews & BBQ Fest. The festival celebrates the simple joys in life, be that a nice guitar lick, a clever turn of phrase or barbecue and beer, making this perfect for the cubicle warriors out there working for the weekend. This is the kind of fest that will stick to your ribs, thick and juicy with a side helping of guitar shreds, best paired with a fresh pint and nice river breeze.

Louisville is Dead
Venue TBA (formerly at The Cure Lounge)
July 28-29
Not just another festival, the Louisville is Dead fest is a two-day bazaar that puts the most righteous, fist-pumping metal, punk and hardcore acts out there, alongside locally-grown art, crafts and cuisine. The good folks at the Louisville is Dead fest give back to the community with a portion of their proceeds going to benefit the Girls Rock Louisville camp, as well as the funding of a documentary following punk and hardcore in the city. It was previously planned for The Cure Lounge, but that recently closed, so the next venue is currently being sorted out, with a full lineup to come.

Petefest Music Festival
Jones Fields
Sept. 7-9
Now in its second year, Petefest is a music festival with a lot of heart. The three-day event looks to raise awareness and funding for mental health advocacy, in part by offering up a fun and chill environment to relax during the dog days of summer. The 2018 lineup includes Son Volt, Ben Sollee, Jeff The Brotherhood and a The Talking Heads “Stop Making Sense” tribute featuring Bonnie “Prince” Billy, Cheyenne Mize and Scott Carney.

Bourbon and Beyond
Champions Park
Sept. 22-23
In its second year, Bourbon and Beyond is for the lighter side of the FM dial, featuring acts including Lenny Kravitz, Sting and Robert Plant as featured performers. Hosted the weekend before the Louder Than Life festival, Bourbon and Beyond features an equally robust lineup of bourbons to choose from, pairing some of the finest spirits from Kentucky with some of contemporary music’s most acclaimed artists.

Louder Than Life
Champions Park
Sept. 28-30
Quickly becoming an early-autumn classic, Louder Than Life lives up to its name with some of the top bangers in metal and rock. Nine Inch Nails will headline Louder Than Life this year, and the rest of the lineup will be out on June 4. In past years, the festival has featured enormous genre acts such as Judas Priest, Ozzy Osbourne and more, right alongside comparably newer acts including Mastodon and Ghost, all titans of metal and hard rock. So get your spiked gauntlet and black makeup out and shout at the devil!

Cropped Out
American Turners Club
Dates TBA (usually late September)
There is nothing quite like Cropped Out, held annually at the American Turners Club on the river. The festival is a celebration of DIY culture through and through. Presented by the folks at Sophomore Lounge, there is a unique curatorial spirit at play. Previous performers have included Kool Keith, Royal Trux, Bonnie “Prince” Billy and more, a hodgepodge of multi-genre players flying their freak flag high. Past events have included basketball tournaments, cookouts and camping, which is perfect for the Ohio Valley autumns.

Waterfront Wednesday
Big Four Lawn
April 25; May 30; June 27; July 25; Aug. 29; Sept. 26
Running from April to September on the last Wednesday of every month, the folks at 91.9 WFPK want your hump day to get a little extra rad. Hosted at Waterfront Park, the Waterfront Wednesdays series offers a fun pick-me-up to break up your week, featuring bands that can satisfy all ages. Highlights this year include upcoming performances by Otis Junior and Dr. Dundiff, J. Roddy Walston and the Business, and more yet to be announced.

Foxhollow Music Series
Foxhollow Farms,
Crestwood, Kentucky
May 11; June 8; July 13; Aug. 10; Sept. 14
A family-friendly event hosted at Foxhollow Farm in Crestwood, this summer music series runs every second Friday, from May until September. The lineup features bands like the Zach Longoria Project and Bendigo Fletcher, the kind of tunes that lift you up and leave you wanting more. Foxhollow offers a scenic view of the natural beauty found in Kentucky, and gives you a taste of some local flavor, too, from the musical acts to homegrown foods and drinks.

Sundays in the Cellar
Various locations
One Sunday per month
A monthly series curated by the auralgamiSOUNDS and Obsolete Staircases labels, Sundays in the Cellar is a who’s-who collection of the geeks and weirdos bleeping their blops with electronics, a modern-day psychedelic experience for the aurally inclined. Featured acts include A7A, Bret Berry and plenty more of the wildest noise makers out there, these musicians weave multi-textural tapestries.

The Local Lineup
Against the Grain Brewery
The last Friday of each month
Following up on the success of their 2017 series, Against the Grain is once again hosting The Local Lineup, a monthly series featuring some of the best and brightest that the city has to offer. That includes The Pass, Second Story Man and Bendigo Fletcher, to name a few, with plenty of guests and surprises still on the horizon. On top of that, Against the Grain will have special session pale ales available at each show.